Ubisoft’s ‘Assassin's Creed’ series has been with us for ten years now, which at first inspired new styles of open-world gameplay and had the player engaged in unique, historical moments throughout the fictional storylines.


At the end of October, we saw the release of the latest addition to the series, ‘Assassin’s Creed Origins’, released with a tremendous amount of hype that has inevitably turned around the franchise from what has been arguably downfalls over more recent years.

Tell you what, the hype was real and the game is everything that it has said to be and perhaps even more for those history buffs.

From the Third Crusade to the Renaissance to the French Revolution, I’ve always been intrigued by the historical settings that have made their way into the franchise.

Now with ‘Assassin’s Creed Origins’, the series breaks away from its chronological sequencing and jumps back to what is arguably the most exciting settings in the franchise, Ptolemaic Egypt (49-43BC).

From the pyramids of Giza to the scholars in the library of Alexandria, the world is vast, widespread and populated with everything you’d expect throughout this ancient Egyptian kingdom. The in-depth detail of the tombs, hieroglyphics scribed in stone, Greek statues and Pantheons are mesmerising. I have so much respect for the designers who had the painstaking task of recreating these amazing places that are seemingly so accurate and so visually stunning.

As with all Assassin's Creed games, ‘Origins’ storyline adheres to the key historical moments that we have all learnt in our high school history classes.

In fact, the lines between the fictional storyline of the protagonist and what we know as the real history of the time tie in so well with each other that it does make you question that perhaps these events could be entirely true.

There is still the presence of the present day Abstergo storyline with one of the historical researchers, Layla Hassan, which connects the entire franchise of the ‘Assassin’s Creed’.

If you’ve played previous ‘Assassin’s Creed’ games you will be familiar with reliving the memories of the protagonists via the futuristic Animus. If you are unfamiliar with this, I’ll be very brief: you are a historical researcher working for a company with technology that allows you to relive the lives from the past with DNA samples.

Diving into the Animus, taking on the memory of a Medjay — an elite Egyptian Military Unit represented by the symbol of the all-seeing Eye of the Horus — named Bayek and his wife Aya, you work to protect the people of the Ptolemaic Kingdom while seeking revenge on five masked men for their son Khemu. Bayek is a robust and righteous character alongside wife Aya who too is apt in assassination. They are well known, loved and respected by the community for their good deeds, traditions and beliefs of Ancient Egypt.

Their relationship plays a significant role in the development of the story and Ubisoft have done a great job in creating protagonists that you can attach yourself to.

If you paid attention in your history classes, the following shouldn’t be a spoiler for you. On Bayek and Aya’s journey for revenge, you become entwined in the power war of the historical figures of the time.

You’ll come across the Pharaoh, Ptolemy XIII Theos Philopator, his wife (and sister) Cleopatra who had been ousted from her throne by her brother, Ptolemy XIII, and then later becomes allies with the Roman conqueror, Julius Caesar.

The involvement that you as a protagonist have with these characters provides a fantastic insight into the time and the real historical events. You can almost forget history class and just play ‘Assassin’s Creed Origins’ and still come out as a historian. Now, as for gameplay, you’ll make your way through this massive open world, free to explore however you choose as you level-up Bayek, loot new weapons, materials, and craft new tools and armour with those materials in that RPG-like fashion.

The main storyline seamlessly flows between the areas that you are exploring that are designated and suitable for your level.

In among this is what at first seems like an overwhelming amount of side quests. Fortunately, though, they don’t have a repetitive nature that has been seen in previous entries to this franchise, rather they are all unique and enhance the experience within this Ancient Egyptian setting.

If you progressively complete the side quests as you make your way through the main storyline, you will see that there has been a lot of thought in the placement of them and the tasks at hand.

Rarely does it feel like you are journeying across the desert, away from everything else you have agreed to help with for one measly task, and if this does happen, there is at least a good reason for it.

As you continue to level up, you gain access to more ability points to contribute to Bayek’s skill tree broken up into Warrior (melee combat), Hunter (ranged and stealth) and Seer (unique tools, poisons and manipulation of the environment). 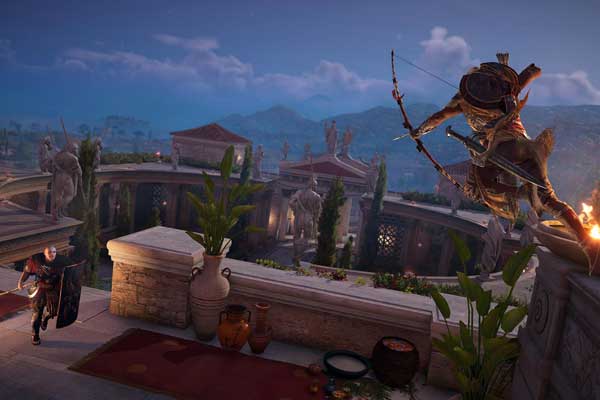 Both the levelling component and skill tree additions to ‘Origins’ allows you to play this ‘Assassin’s Creed’ as you want to and is one of the great new features that has revitalised this franchise, making it fresh and more personalised.

The new features don’t end with this RPG element. The combat system has had a complete overhaul from previous entries of the series.

You have complete control over Bayek and how you go about fighting. No longer is there timed animations for dodging or parrying an attack. You’ll have to ensure you are positioned correctly, ensure you dodge an attack at the right time or raise your shield to block a swing of a sword, meaning you’ll always need to consider your timing and positioning of Bayek.

‘Eagle Vision’ from the previous games that allowed you to locate and track enemies and targets has found a whole new, literal meaning.

Bayek has a companion eagle, Senu, which at any point of time can be accessed to provide a birds-eye view of the landscape. This is a huge element of the game and you will constantly be flying through the skies locating enemies, loot points and other secret areas.

I found I used Senu a lot, almost always relying on the eagle to work out the best path towards each and every assassination target. 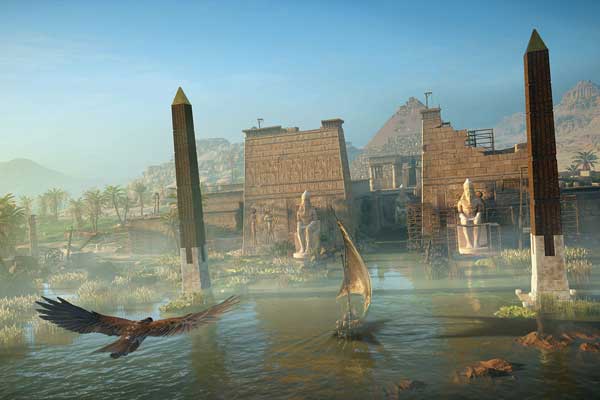 Alongside this overhaul is the addition of the adrenaline bar that fills throughout combat. Once full, you can unleash vicious combos and those devastating finishing moves traditionally seen in the ‘Assassin’s Creed’ games.

Considering all these amazing new features which have rejuvenated this latest entry, I feel let down that there hasn’t been any improvement in the climbing/ parkour element of the game. At times I felt like I was fighting with the analogue stick to climb over here or drop down over there.

I wouldn’t say it is distracting or impedes on the gameplay, but it is as if parkouring is the least smooth element of the game now when traditionally it was seen as a game changer.

There is so much more that can be said about this game from the ongoing ‘Trial of the Gods’, ‘Horde Mode’ and ‘Discovery Tour’, but I’ll have to leave that for you to discover.

If you are looking for something to keep yourself, your kids or a friend entertained for hours upon hours these Christmas holidays, then this should be on the top of your list.
Tweet
« PreSonus Eris E3.5 Monitor Speakers Review 5 Things NOT To Do In Virtual Reality »
back to top