Filling the Beenleigh Theatre Group stage with passion and abundance, ‘Blood Brothers' performed to a very responsive and adoring crowd.


It’s no secret that this show can be hit and miss with some audiences. Testing the bonds of families and highlighting the struggles of growing up in different circumstances, ‘Blood Brothers’ can suck just about anyone in, if performed well. Fortunately, Beenleigh’s ‘Blood Brothers’ is a true tip of the hat to director, Roslyn Johnson, and set designer, Ian Johnson. Their experience in their craft was evident as they moved an action-packed play effortlessly around the stage.

Not only did the live band add to the atmosphere, but their position above the actors provided seamless set changes. Detailed brick walls painted opposing neighbourhoods and the innovative design was clever and operational. In fact, additional rooms popped in and out of spaces naturally and the changeover from city to country was easily managed. As a cast of many, and of all ages, the ‘Blood Brothers’ ensemble worked well together to deliver an entertaining piece of theatre. William Boyd gave a stand out performance as Mickey Johnstone. From the moment he entered the stage to his chaotic and emotional death scene, he invigorated the show with energy and charisma. Boyd’s interactions with Linda, played by Aimee Monement, hit the audience right in the feels as well. She also threw her heart into her performance and both actors had wonderful transitions from innocent children to adulthood.

Also worth mentioning is Fiona Buchanan as the struggling mother-of-seven, Mrs Johnstone. Her courage and determination with the role prevailed and she delivered a solid performance. Lauren Gerry as the play’s narrator was an interesting casting choice. Typically the part is played by a mature actor, so it was enlightening to see a different take. Gerry handled the pressure of the part well; however the audience could have connected better with her sinister scenes if there was more light-and-shade in her performance.

In some instances, fast-paced dialogue and sound levels made it hard to understand plot points of the show. Visual stimulus attempted to assist with these changes, but at times it pulled audience members out of the action, rather than drawing them in. The Australian ocker was also prevalent in some performers accent work. This made things a little distracting amongst this British classic. 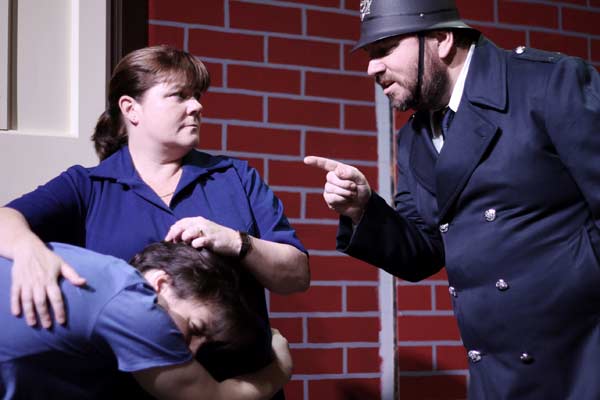 Regardless, these are small notes on a play that was tight and well-rehearsed.

For a community theatre, Beenleigh Theatre Group never fails at performing entertaining and engaging productions. ‘Blood Brothers’ was no exception.