Valtozash Bigband appeared at the Brisbane Jazz Club (8 April) as Gregorian monks, on a smoky stage set against the magnificent city skyline.


They opened the first set with a metal take on Herbie Hancock’s jazz standard ‘Maiden Voyage’. Valtozash played ‘Iron Maiden Voyage’ with a canon fire of the signature chords: electric bass, horns, crashing cymbals and vibes, and the wild flurries of soprano sax and electric guitar weaving throughout. The horn section stabbed bright, precise chords as lightning in a thunderous sky. 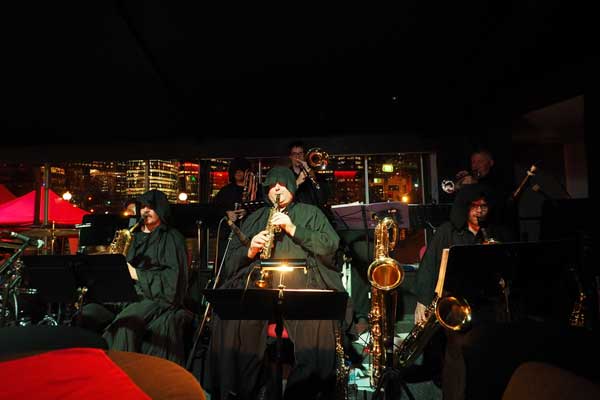 Guitarist Lachlan Bell lulled us into ‘Lick Of Destiny’ with the intro from ‘Stairway To Heaven’, and the horns played curious harmonies underneath, oddly beautiful and implying mischief ahead. Then suddenly they were a bright-funk orchestra in the era of Shaft and Rocky, bassist Zac Sakrewski and drummer Ben Shannon driving that groovy, fat pulse, with the brass section calling on us to get our boogie down. 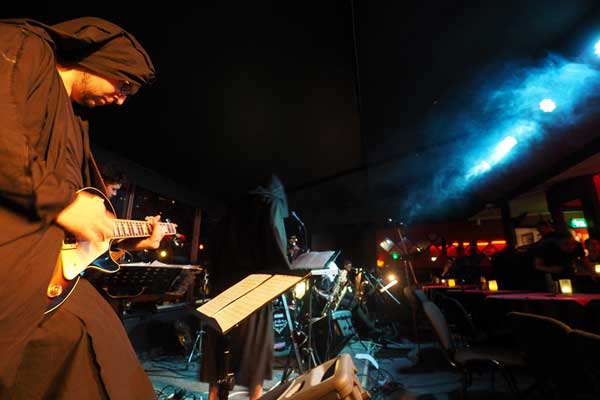 In ‘Methylated Demons’ the hoods were off and those jazz-metal monks were working up a sweat over funky rhythms and chopping time signatures; Bonetti let rip with a solo on the vibes, along with John Stefulj on soprano sax.

Valtozash played original compositions by Bonetti and other band members, interpreted songs by other bands in the genre, and did heavy takes on jazz standards. Bonetti said the charts are written out fully, since the horns often play in harmony, and he writes commands like “shut the f**k up NOW” which you can clearly imagine in their choppings and changings mid-song, which is so metal. For hard-bop fans, they played ‘Moanin’ by Charles Mingus in the second set. Bonetti has previously said that Mingus was metal even before there was metal, and Valtozash proved it. Baritone players Papa Joe and Julian Palma joined Stefulj to play the signature opening riff. Three baritones to do it! It was ferocious, wild and loud; you wanted to scream with the beauty of it.

In ‘Aerial Nardis’, a soprano sax wailed in a slow and ominous start to the band’s take on a Bill Evans song. Drummer Shannon watched Bonetti like a hawk for his cues, as he and guitarist Bell worked up an unrelenting homage to Doom. Bell’s skilful fingers moved in a blur, creating beautiful despair even as he tuned down the guitar with his left hand! Shannon thudded the death knell over 'Aerial Nardis'. The brass section took up as one and lit up a dusk sky with poetic sadness. The soprano sax was like a dying bird falling through it. Bonetti’s arrangements are nothing short of brilliant. He celebrates both jazz and metal, hoping to bring fans of either genre to discover more about the other. His music contains a myriad of activity which is delicious to the ears.

Only the best musicians can perform it, and the band Valtozash is just that.