When it comes to The Cure, there is no middle ground with their fans – you either love 'Disintegration' and this band unquestioningly or you're worthless.


So with that in mind, safe to say this review will treat the iconic band’s Sydney Opera House performance (24 May) as part of Vivid Live as more of a self-inflicted education than an ardent appreciation of what some might call a pivotal album of musical genius.

Is 'Disintegration' a pivotal album? Perhaps, perhaps not. It depends on who you are.

For the massive cluster of folk from varying walks of life that attended the first of The Cure’s sold-out Vivid performances, this was an opportunity to relive an array of bleak and, dare it be said, emo tendencies manufactured by The Cure.

Robert Smith, now 60-years-old and still striking the image of a befuddled crow as well as a deep and misunderstood artist, held a captivating court the entire evening.

The standing ovation given to The Cure as they ambled onto the Concert Hall stage was rapturous – they hadn’t done anything, at least not yet this evening; the reception was given merely because of the last four decades of activity and reputation. An overwhelming sight to behold if you’re not as familiar (or as in love with) The Cure’s work as this audience. 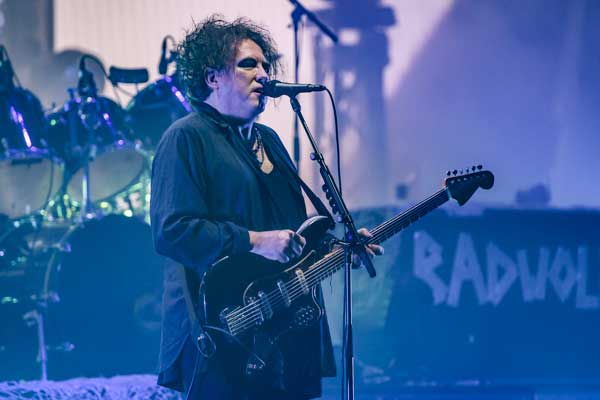 
The stage was made suitably dreary by an abundance of smoke, doused in a light show of dark colours and thought-provoking shades. The audio recording of a heavy thunderstorm as people entered the Concert Hall set the scene suitably – 'Disintegration', or so I was told, is meant to be heard against the sound of falling rain.

To glance around at the faces of the audience was to experience human emotion from across the spectrum in their purest form – tears streamed down the face of a woman, her devotion to the band unwavering through glassy eyes; a little girl sang with her father through the wistful ‘Pictures Of You’; and one couple stared devotedly into each other’s eyes through ‘Lovesong’, ignorant of how corny they may have appeared to others.

But, to be a part of such an evening, to witness such devotion, such ardent passion for the work of one band and the degree of their longevity, well, that is surely something special, and an act in music history to be proud to have been privy to. 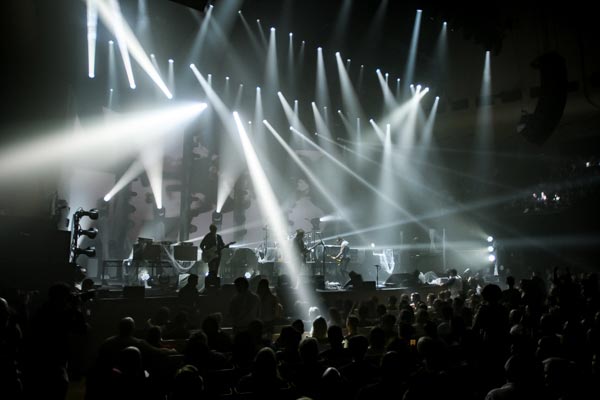 
The second half of the album’s performance and the arguably unnecessary eight-song encore were musically monotonous at best, causing more than one reviewer to slip into a daydream.

Smith spoke rarely, uttering only softly spoken thanks until he shared a few sentences regarding the execution of ‘Homesick’ – and still, people hung on his every motion. Smith is nothing if not a poet, still seemingly finding new romantic nuances in his art even now.

The Cure performing 'Disintegration' wasn’t a dull affair exactly, or a boring one, nor has it in any way generated a negative opinion here of the band; merely it was thought-provoking, instigating whimsical daydreaming and deeper analysis. And, given the performers, perhaps that’s the intention of this music, after all. 
So why do you go to hear a live rendition of an album that’s older than you are? You go for the hypnotic and unintelligible hold The Cure have over their fans.

You go for the fascination that comes from seeing a band about who books have been written, their music cited as influences for over three decades, for a chance to witness the people who were part of a significant movement in music history, and for the sheer power they hold over people’s hearts and minds.