Review: The Wombats @ The Riverstage (Brisbane) Australia's favourite rock & roll expat marsupials were back in town!

Indie rock legends The Wombats returned to Brisbane's The Riverstage on Friday (17 June) after nearly three years away. The band returned with their fifth studio album 'Fix Yourself, Not The World', with the packed, all-ages crowd excited to see them.

The show kicked off with home-town hero Jaguar Jonze and her contagious energy. Busting out the flute during 'Murder' and bringing things home with a huge finish with 'Kill Me With Your Love', Jonze had a vocal crowd in the palm of her hand right through to the end.


Next on stage was 19-year-old British talent Alfie Templeman. For his debut Australian visit, he couldn't have asked for a better reception.

Riding high on the success of 2020's 'Happiness In Liquid Form' EP and his recently released debut album 'Mellow Moon', Templeman brought a happy-go-lucky indie energy that the youthful crowd absolutely fed off.

The young star had punters swaying and bouncing, sliding in epic guitar solos (notably towards the end of 'Candy Floss') and some incredible bass slapping from his band towards the end of the set, which closed on a high with the title track of his aforementioned 2020 EP.

The final support act of the night were Australian rockers The Vanns. There were definitely a few diehard Vanns fans among the crowd, including one kid whose parents managed to keep him up on their shoulders for the entire set (and long into The Wombats performance too). 
Opening with their 2019 track 'Deranged', the sound of crowd sing-alongs carried far across the Brisbane River as the Illawarra four-piece entertained with a set that also included 'Mother', their Like A Version cover of Bon Iver's 'Hey, Ma' before closing their performance with the thrashing of their instruments for the huge finale of 'Fake Friends'.

As the clock hit 8:15pm (the scheduled start time for The Wombats), I looked around at a packed-out Riverstage, filled from the front of the pit to the very top of the hill and further back than that.

The lights went dark and a chorus of excited screams filled the air. Out of the darkness, Matthew 'Murph' Murphy stood at the fringe of the crowd arms extended, welcoming adoring fans to the show. 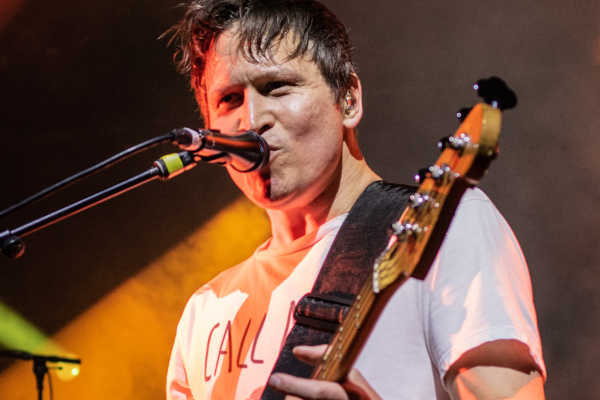 
Launching into a track off of their latest album, 'Flip Me Upside Down' had both new and old fans jumping around and singing their hearts out.

A beautiful thing about a Wombats' show is that you won't find any division between fans. No matter your favourite song or album, you'll still listen to whatever is next from the band with enthusiasm, which especially showed on this evening as punters threw every word right back at the stage.

"Brisvegas, you ready for another song," asked Murph. Fronting to the crowd, Murph and bassist Tord Overland Knudsen ripped into one of their iconic riffs, ushering in the banger 'Moving To New York'.

This is where the energy stepped up a notch with performers and punter alike synchronising in a euphoric state, bouncing around with chants of "doo doo dooo" echoing throughout the stage. If you were standing outside or anywhere near the venue, you definitely would of heard thousands of people exclaiming: "I'm moving to New York, because I've troubles with my sleep." 
For a show that lasted over and hour and a half and crammed in 21 tracks, it just had to be packed with little moments and quotable anecdotes from the boys. From "Thank you Mr Wombat, you know he just lives down the street. . . you can go throw square crackers at his door," referring to the Wombat figure dancing around and killing it on the fake trumpet during 'Ready For The High'.

Or getting the crowd to scream out their favourite food in preparation for 'Pink Lemonade'. We were even taken back in time to when Murph lived in East London and attended an illegal rave, a precursor to 'Techno Fan'. Moments like these were so plentiful during the show, I'd have to make a seperate list to get through them all.

Being a little obsessive about The Wombat's 2007 debut album, getting to hear an a capella of the intro to 'Tales Of Girls, Boys And Marsupials' absolutely made my night.

I wasn't the only one getting hyped up as the beginning of now TikTok infamous track 'Kill The Director' brought the crowd right back into it. If you know the track, you already know how energetic the close of this track is; and it being performed live only amplified this. It was an orchestrated performance; the band waving as thousands of hands clapped in unison.

"We can't think of a better place to end our Australian tour," declared the band. 
Throughout the show you could tell how much thought, attention and care had been poured into these concerts. From the colour of the lights matching names of songs, or strobes flashing on and off to beat, the scenes at The Riverstage were testament to The Wombats and their crew's hard work.

However, The Riverstage's hill looked just as beautiful covered in lights and lighters for a very special acoustic rendition of 'Lethal Combination'. Another conductor-type gesture from Murph had the crowd swaying and with a lift of his hand, a huge cheer arose from the awestruck crowd.

"Hands in the air Brisbane, this one's going off!" Just the words you want to hear before your favourite Wombats song. 'Tokyo' launched off at full speed and full energy, Tord ripping around the stage and drummer Dan Haggis letting loose on the kit.

The last time I saw 'Tokyo' performed live was also at The Riverstage in 2019 when I was working as local crew for the packdown. If I had to compare. . . I couldn't. Whenever this song is played, it goes off and the crowd at Riverstage made no exception. 
Finishing off with a whirlwind drum solo from Dan that just fit so damn well, Murph really summed up how we were all feeling: "Well sh.t the bed Brisbane, this is incredible." Okay maybe that's not exactly what he said, but it's what I heard and I think it fit perfectly.

After a powerful rendition of 'If You Ever Leave', the band launched into their last song of the night. 'Greek Tragedy' is a dreamy, euphoric track that infected the world back in 2015 as a single from 'Glitterbug', and its impact has not waned an inch.

It had everyone holding and dancing those close to them, rearing their head back to belt out that absolute anthem of a chorus. The track closed in a curtain of sparklers descending from above the stage, lighting up every inch of the hill and shining light upon the giddy smiles of those beyond.

But while the crowd seemed more than content with what they had received, there was still something missing. And after a five-minute chant for an encore, the band finally returned to a red-illuminated stage and the melancholy instrumental of 'Method To The Madness'.

After a few more thank yous to crew, managers and venue, everyone knew what time of the night it was. Main dish time: 'Let's Dance To Joy Divison'.

This track has been so ingrained in many childhoods, adolescences and adulthoods (including my own). It's a song that drops egos and shatters worries, reducing all listeners to the same level, just wanting to have a good time. 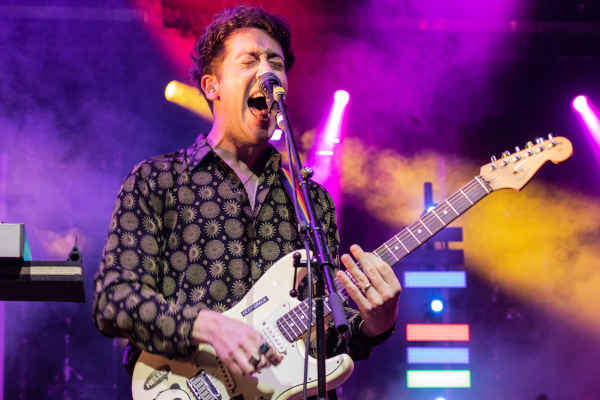 
As the song rose and rose, so did the crowd, moving more and more intensely until five wombat-suited figures blasted onto stage beckoning on a now airborne crowd. Murph and Tord had dropped instruments, arming themselves with microphones to run and jump around the stage.

The breakdown was a flurry of hair and sweat in the pit of the crowd with ear-to-ear grins chanting those last lyrics until being swallowed in a roar of cheer.

"Quite a bold statement but, best show of the tour. Stay fresh Brisvegas."

With one final track from the band, people clambered onto their friends' shoulders for the start of 2018's love bop 'Turn'. As the song played out into the night, it was a bittersweet feeling when streamers shot into the air for the last time.

Knowing all good things come to an end, the band gathered themselves and had a photo taken in front of their adoring fans then exited the stage.

As the cool night took hold and the crowd dispersed, a little warm feeling had attached itself to the hearts of the crowd. The fun, excitement and wholesomeness of the show had not gone away, but followed each and everyone home to stay the night.