Opening act was Saint Skirts, a feisty friend duo who belted out 'The Chain' by Fleetwood Mac to an appreciative audience. Appearance-wise, an imaginative mind could summon the image of Joan Jett and Debbie Harry performing side by side. 
From this sweet starter act, the audience was launched ravenously into the full-on visual and aural buffet that was Concrete Palms.

Anyone who genuinely believes classic rock is dead would eat their words after a few moments tuning into this heavy SE Queensland band. They scream, they shred guitar strings with their teeth, they play their instruments behind their heads. . . or with their feet, in the case of the drummer.

They were entertaining as hell and rattled the Mammoth's bones; it took all the willpower of the audience (and looming threat of security) not to defy COVID sit-down laws and mosh and writhe to bangers like 'Break My Mind'. 
Starved of musical nutrition after months of lockdown, Concrete Palms quickly satiated our appetites. . . yet still, we craved more.

Next came Taine Joso – a band that proved something of a palate cleanser, cooling the tempo and guiding us through the Soundgarden of grunge and progressive rock.

One could detect notes of Chris Cornell, TOOL, Alice In Chains, and more. Their crowd pleasing yet restrained intensity ensured we were all salivating again before the headlining act. 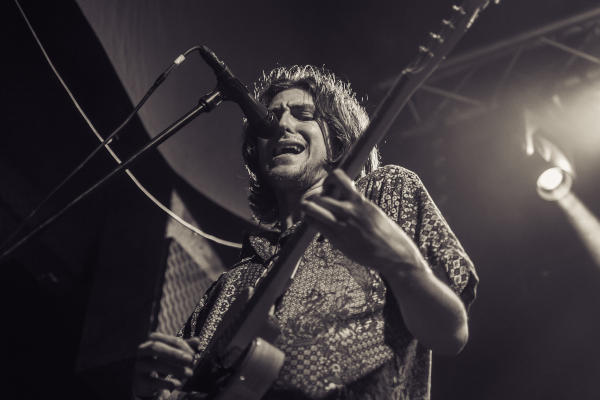 
How do you describe Street Pieces? It's clear they're singing on the shoulders of giants. Trying to pinpoint their sound felt like rummaging through a chest overflowing with motifs and monikers of rock and metal artists.

Imagine if Jeff Buckley joined forces with Def Leppard, or INXS travelled back in time and recruited Robert Plant. I heard shades of Warrant seep through tracks like 'Preacher', and 'Monster' called to mind a touch of 'Creep' by Radiohead.

The band members' stage personas are glam rockers on casual Friday; shedding the crazy outfits but not the sex appeal. Sprinkled with the notoriously suggestive charisma of The Doors, they've created a sound that's full Coyote Ugly – made for stripping down and gyrating on sticky floors and bar tables.


Before belting out one of their fan favourites, the lead singer let rip a wry: "Are you even f...ng ready for this?!" to his enrapt audience.

The sight of band members doing power kicks and throwing their instruments in the air like a rockstar food fight, after a months-long performance famine, has this reviewer dead keen for more live music. Thanks to Woolly Mammoth and MMK Music Productions for setting such a benchmark last Friday.
Tweet
« Diversity, Thought Leaders, First Nations Voices Highlight BIGSOUND's 2020 Programme Tame Impala Reschedule Australia Tour To December 2021 »
back to top