Review: King Gizzard And The Lizard Wizard @ The Riverstage (Brisbane) It's Fri-Yay! The sun has just sunk and the air is cooling.

Tonight (23 April) as part of the Summer(ish) Sounds Festival series, King Gizzard And The Lizard Wizard (KGATLW) have crossed borders to bring it live and loud to Gizzheads at Brisbane's The Riverstage.

I join the drove of buzzing gig-goers to tromp the incline to the entry corrals, manned by friendly faces, and into the fenced-off amphitheatre. Punters of all ages are spotted, swarming the merch tent, grabbing a feed from a food van or a coldie from the drinks tent.

Bodies are mostly robed in band tees and casual attire and, yes, psychedelic-printed shirts or pants, à la Woodstock. Hang on. Dungarees too? Ah! of course.

Well, the funky fashionista in the coffee-coloured bib and brace overalls is defs the best dressed Gizzhead as he struts his 'Fishing For Fishies' get-up. If I've lost you, watch the video clip.

Stars twinkling above as I traverse the chalk-lined path between the marked-out punter sections to find my possie. The scene confirms the COVID-safe plan is in place and reminders about social distancing are clearly messaged upon the digital backdrop onstage.

Five-piece Melbourne band, The Murlocs kick off the night. Their '60s-vibing, blues-rock and garage-rock tunes fill the venue during their set.

We are immersed in their bluesy raptures and lo-fi sounds. At times, jangly guitar is heard above the pulse of the bass and drums, and groove of rhythm guitar.

The lament of blues harp can never be too much during the set and my mind trips, taking me to dusty red plains or my own episode of 'Firefly'. Kenny Smith vaunts his adept technique as a harmonicist and I note he is honing a confident, flamboyant frontman style.

Our final swig of The Murlocs is a live tasting of their new single 'Francesca' (a song for Kenny's mum, Lou). It rolls out on a train of harmonica notes and chords and the band plays it tight. Punters guzzle every last drop of this banger. I am excited.

There is more harp to come with KGATLW later on, but if this banger is anything to go by, I can't wait for the release of The Murlocs fifth album 'Bittersweet Demons'. Bring it!

More bums are parked in the white plastic chairs interlocked with zippy clips – to ensure crowd-safety. I should mention, they are deceptively comfortable. 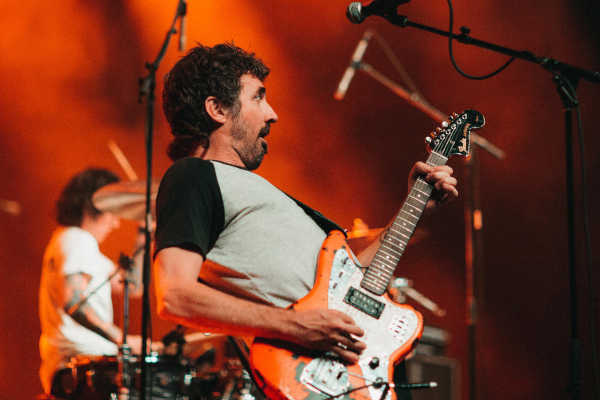 
The speaker stacks spew scratchy and glitchy noise before the groove of the first song from their 'A Laughing Death In Meatspace' (ALDM) album is recognised by fans. 'Chameleon Paint' gives a Talking Heads vibe and is followed by 'Antimatter Animals – a rougher number that has heads nodding then banging while Liddiard and Dunn crank on guitar.

'You Let My Tyres Down' is initially a mellow piece that winds the crowd back up. Hammel pounds the kit so hard she slightly lifts off the stool on the downstrokes and it's not the only song in the set she attacks.

Breaking up the old with the new, Liddiard introduces a new song and it transfixes the crowd. Man. Kitschin is so chill on that bass. Am I the only one that thinks of Kate Pierson when she sings?

Two more from 'ALDM' as the crowd cheers in 'Rubber Bellies' and 'Two Afternoons'. The latter, with its drop-in chorus and punishing guitars, is brilliant. Liddiard is on the stage floor either adjusting effects pedals or replicating a Sid Vicious post-punk floor manoeuvre. 
Their last song is 'Paradise' from their sophomore album 'Braindrops'. It too starts slowly and builds with discordant chaos and almost grating arrangements that Liddiard, Dunn, and Hammel throw themselves into.

The crowd is fired up for KGATWL, having revelled in an extreme set of erratic, abstract experimentation, delivered with expressive style, and while often a discordant cacophony of psychedelic dystopian punk rock, there were beautiful melodies that somehow worked in the chaos. A young punter has a hooked look. I fleetingly relive my first helpings of Sonic Youth and Fugazi, and smile at him knowingly.

The time is near for our masters of psychedelic rock and entrepreneurs of microtonality to assault our senses.

Onstage are the specially built or modified instruments that enable them to play the set list's cracker tracks created in 24 TET tuning. Combine that with the artful use of vocal and guitar processors/ pedals and electric keys this should be one heck of a live musical adventure.

Shadows move across a dark stage, red graphic flames scorch the digital backdrop which will display trippy geometry and abstract graphics during the set.


Cavanagh (drums) starts in with a 'tsk, tsk, tsk' from his kit heralding 'KGLW (Intro)' and is joined by Craig on keys, Kenny-Smith on tambourine, Mackenzie and Walker on guitars, and Harwood on bass. The band flows straight into 'Oddlife', (also from KG).

The stage is washed in azure blue and now we see the six talented multi-instrumentalist musicians before us. Mackenzie and Walker sing to us for the first time tonight: "All this rock 'n roll is bad for my ears. Lemme tell you one thing about my life. It's weird." Ha! From a musical perspective – we know and love it!

At the first tones of the Sabbathesque intro to 'Doom City' (FMB), we are on our feet. Mackenzie howls "Woooooooh" and the music stops. Walker tells us: "Hey, the bass is broken, sorry." Sorry? This is live, sh.t happens.

The crowd shows respect and within seconds the groove is back thick and heavy. All four vocalists repeatedly chant "do, do, do, Doom City" and the bopping crowd chimes in. At the breakdown, heads bang a little slower again and punters join in and chant the title. Yes absent Gizzheads, Mackenzie is playing his bizarre looking yellow microtonal flying axe. 
Walker wants us to choose tonight's victim to sign in the next song – Craig, accepts the mic and sings out "nuclear fusion!" with a mideast ululation before the band oozes a jazz-funk cocktail of experimental Gizz brilliance. 'Nuclear Fusion' another favourite from FMB.

Two more tracks from KG delight fans. 'Minimum Brain Size' and 'Ontology' with its prominent Turkish-rock vibe ending in a delicious psych-rock jam. Kenny-Smith takes up lead pipes from Mackenzie for 'Supreme Ascendancy' (LW). Despite the dark lyrics on sexual abuse in the Catholic church, the drum and bass groove hook us in and punters rock out in unison.

KGATWL then throws 'The Book' at punters. Ha! No, not literally. For yet-to-be Gizzheads, it's an electro-jazzy number from their 11th studio album 'Sketches Of Brunswick East' with 'Mild High Club'. Craig and Kenny-Smith set the mood and we love the guitar licks, but go nuts when Cavanagh smashes the tubs for a solo fuelled by punter cheers and rhythmic claps.

Keys, guitars, and vocals come back into the mix as the dynamic hexad chug on through to the end of this song. A sea of blissful faces nods to the thumping waves of frenzied middle eastern-rock rhythm of 'Open Water' (FMB) that gets great crowd interaction. Punters belt out the lines and roar as the band gallops the track to its end.

From LW, 'Static Electricity' dishes out infectious melodies and a consistent driving rhythm section that carries the building guitar jams. Splendid. The folksier tones of 'East West Link' (LW) vibrates in our chests and 'All Is Known' (Gumboot Soup) is followed by an interactive roundelay for Walker's Aunty Judy. The crowd gets bonkers yelling a mantra of "Judy, Judy, Judy..." during short instrumentation that abruptly stops with a single shout of "JUDY!". 
This paves the way for 'Pleura' (LW) – a track of unique beats laced with lyrics about a necromancer manipulating the undead. Mackenzie is a high-energy frontman. This guy takes a simple power stance then contorts his body in all directions while playing his guitars hard, it's difficult to look elsewhere.

But as Kenny-Smith takes the vox reigns again, he has our attention as he turns up the heat with onstage swank as he sings the boogie buster, 'Straws In The Wind' (KG) while cavorting on stage with carefree pelvic thrusts, hip undulations, bum wiggles, hair tossing (think Wella Woman).

The crowd egg him on as he uses the mic line used as a skipping rope. He steps out on the front barrier and gets his jive on atop one of the speaker stacks side of stage. The crowd who has been singing along cheer hard and loud.

The familiar bassline of 'Honey' (KB) gets fans excited and this toned-down melody loved by many Gizzheads keeps the ecstatic crowd engaged to the end. 
The crowd screams for "one more song" and we get it. The digital backdrop returns to fiery red as the doomy sludge mood returns with the tones of the finale track – 'K.G.L.W outro'. Its dark riffs have headbangers transfixed to the end of the mammoth 17-track set list filled with Turkish-toned delights and with that KGATLW is done.

Chatting to one of the punters on the way out, I asked him how his night ended up, his retort: "Honestly, while I couldn't surf the crowd or mosh hard, I had a bloody ball, mate!" So did I dude, so did I.

The multilayered resonance emitted from the stage tonight, jilted the senses with successful experimentations with microtonality from the albums 'KG', 'LW' and 'FMB'.

A KGATLW gig is an experience not just a performance, and you should treat yourself to a live set by these experiential genre-bending, time-warping rockers.
Tweet
« Billie Eilish's Sophomore Album 'Happier Than Ever' Will Arrive In July Harper Bloom 2021 Australia Tour »
back to top