Hans Zimmer returned to Brisbane at the Entertainment Centre (3 October), and he put on a show like no other: captivating, thrilling, and a little bit rock & roll.


The audio mix was perfect; it felt like I was right in the movie theatre, perhaps. . . even better still.

With the recent release of ‘The Lion King’ remake, it featured in this tour’s set. A sun rises on screen as iconic Zulu singing by Lebo M resonates across the stadium. I am not sure how to describe my emotions other than awestruck. 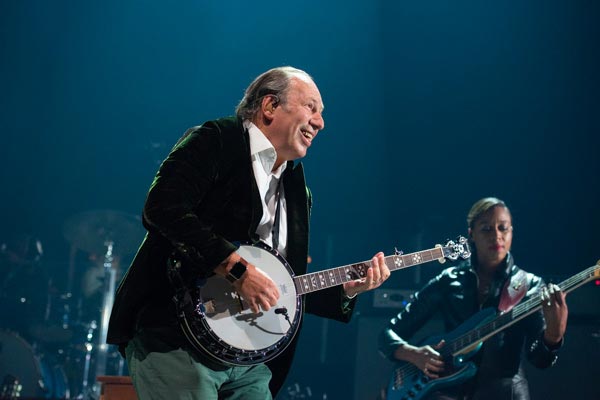 
The programming of the lights was fantastic with creative uses for every piece; sometimes synchronising with the live visuals. I did find the live visuals a bit hit and miss, but a notable mention was ‘Thin Red Line’ where a pulsing red line with the striping stage lights really added to the atmosphere of the piece.

Pieces encapsulate the entirety of a film’s score. With electric guitar and full drum kit, the symphony had a unique mix of contemporary complexity with modern sounds.

‘The Dark Knight Trilogy’ begins slow and ominous. Glimpses of the movie spring to mind, but the pieces do stand on their own. Pressure builds to immeasurable levels and it felt like a rock show with flashing lights and people moving onstage.

Every moment Hans had to speak, he spent it talking about someone else. From his guitarist of over 100 shows who never plays the same riff, to Tina the cellist who has been practising for 8 hours a day since she was 9. 
He is truly a character; with martini glass and shaker sitting atop his piano (despite never being touched) to his between-song ramblings gushing over the band. It showed true sincerity; it’s clear to see the show is about the music and the people, not him.

The show finished with ‘Aurora’, a moving piece in remembrance of the victims of the Aurora, Colorado massacre (2012), before transitioning to music from ‘Interstellar’. I held my breath as the beautifully written score lifted me off my feet.

Hans has written some of the most iconic film scores of our generation. The progressive pieces travel with you through an entire film, an emotional roller coaster that leaves your body buzzing as harmonious sounds crescendo to critical levels. 
To see such pieces flawlessly performed by the band and accompanying Australian orchestra and choir was truly an un-skippable experience.
Tweet
« Review: The Get Up Kids @ The Corner Hotel 2019/20 Woodford Folk Festival Programme »
back to top