The Flamin’ Galah is a long, narrow venue with high, red-brick walls, a long bar on the left, and front-of-house set-up on the right. In between was a dense sea of men and women, with arms raised for their man Chong Ali, and for themselves. Because the theme of this show was representation.

Chong gave a shout-out to Hayden of Deep LVL and Flamin’ Galah. He acknowledged all the bar staff, and Hugh the house soundman. Then he turned to his fans. “Most of all, a big shout-out to you guys – look at you motherf...ers, all dressed up and sh.t! I actually wrote this song for you – I think you guys can vibe it with me, right?” They sure did.

“I’m a Problem... like a war correspondent, reporting from a province that ain’t transported by Qantas... my skin tone’s what’s shinin’, and if that’s ignitin’ a fire then I guess we’re fightin’, I’m a Problem.” The crowd heaved to a thudding bassline, and Chong paced the stage, puma-like and punching.

He took his emcee swagger (which he has in spades) infused it with love and gave it back to his audience. “My fam in the house. Now let me see you represent two times, put two hands up in the goddamn air! Don’t it feel good that you stand up with your fam? F... yeah.” In that moment, everyone got to be Chong Ali: proud, Asian and unapologetic. It felt real good. 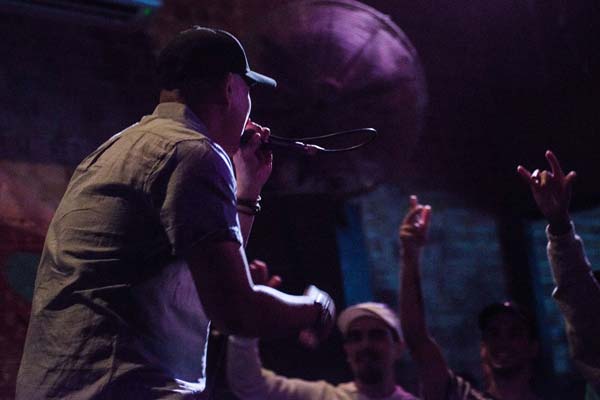 
There’s pathos in the poetry. “Finger to the sky if you know what it’s like, to never sleep at night, 'cause you’re dreaming with your eyes wide open when your life’s so broken, you wake up with your eyes all swollen.”

The crowd sang the chorus of his new single ‘Laughing Buddha’, and soon The Flamin’ Galah was heaving as they busted their lungs singing all the words to ‘Yeah Bruss’, Chong’s homage to his South Brisbane neighbourhood.

When asked before the show whether he gets nervous standing up there alone on stage, sometimes performing to corporate crowds, Chong said: “But I’m never alone, my fam is always with me.” That was clearly demonstrated tonight. The love for Chong, his words and his music, was palpable. You had to be there to witness it.

“He’s been singing since he was a kid,” said someone who was at school with him. Chong Ali is still singing, only now his voice has become the voice of his brothers and sisters in Brisbane, and of a wider family beyond.

He serves up music soaked in truth and defiance. His honesty is hard and resonates like a clarion call. But this guy is a fighter, a charmer, and he wants a better world. His 'fam' will be there to hold him up, and to follow him.
Tweet
« This Week In Pop – 4 November, 2019 Review: 2019 Arts Ablaze Festival »
back to top