I might just be getting old, but if Summer Sounds Festival's Live At The Bowl series (Melbourne) is anything to go by, socially distanced gigs in the COVID era are an absolute treat.

Emerging talent, Mia Wray kicked off the night's proceedings greeting us as we made our way to a 6-person deck on the Sidney Myer lawn (27 February).

While the deck's metal scaffolding and fold-out chairs were a far cry from the quaint white-picket fences in the festival's promotional photos, they provided plenty of room within for COVID-safe dancing and socialising. The deck also offered perfect visibility of the stage and its adjoining screens, meaning I didn't have to get irrationally angry at the tall dude who inevitably ends up in front of me at every gig. Bliss.

Wray's powerful vocal chops brought artists like Lorde and Florence Welch to mind, and her feel-good folk-pop repertoire made for a prime opener, especially since the occasion marked the artist's second performance with her backing band. She's definitely one to watch. 
Didirri's brand of introspective pop-infused folk made for a smooth transition from Wray's opening set.

The artist largely performed tracks from his highly acclaimed 2020 EP 'Sold For Sale' and delivered several existential monologues about the meaning of life, happiness and love, emphasising his gratitude to be back up on stage. He also performed an unexpected cover of Green Day's 'Wake Me Up When September Ends'.

Didirri wrapped up the set with an emotional performance of 'Blue Mood Rising' before graciously thanking the audience – truly wholesome. 
By the time Something For Kate took to the stage, the bowl was buzzing. Audience members were now well and truly on the beers and happy chatter floated across the air as the sun started to set, casting a gorgeous glow across the lawn.

The classic SFK line-up was joined by touring members Adrian Stoyles and Olivia Bartley (who also performs as Olympia), and opened with a huge rendition of 'Electricity', immediately establishing they would be the loudest band of the night.

The group seamlessly balanced material from their recently released album 'The Modern Medieval', alongside favourites like 'Cigarettes And Suitcases' and 'Captain (Million Miles An Hour)', transporting the audience to the glory days of early 2000s Aussie rock. Something For Kate - image © Rick Clifford


Vocalist Paul Dempsey noted that the 20-year anniversary of 'Monsters' is next month (making everyone feel a hundred years old in the process) before launching into the angsty banger.

Something For Kate's chemistry and musical skill certainly hasn't declined in their tenure as one of Australia's most beloved rock bands, and a solo acoustic version of 'Deep Sea Divers' highlighted how Dempsey's voice still sounds exactly the same as it did 25 years ago.

The five-piece were a joy to witness live, particularly when Mia Wray joined Dempsey onstage to sing backing vocals in 'Bluebird'. The band concluded their set on a high with 'Déjà Vu', setting the bar high for what was to follow. Something For Kate - image © Rick Clifford


A testament to the event's excellent organisation were the short waits between sets – in no time at all, Bernard Fanning came onstage with his backing band, The Black Fins, and opened with the downtempo 'Hope And Validation'. The meandering bluesy number stood in stark contrast with the driving rock sounds of Something For Kate, leading to a tired lull among the crowd during the second song, 'Reckless'.

After a harmonica-drenched ten-minute blues jam to close out 'Not Finished Just Yet' (an apt title), Fanning sensed the crowd's energy had dipped. "We're starting slowly but there's an upward trajectory, I promise!" he reassured.

Fanning's effortless quips and observations early in the set seemed to receive more of a spirited response from punters than his initial songs, particularly when the artist called out the double standards for audience capacity at arts and sports events.

The middle of the set proved to be a highlight, which saw Fanning on stage alone playing a rendition of 'Steady Job'. His vocal performance was phenomenal, particularly when he hit his falsetto notes with ease. 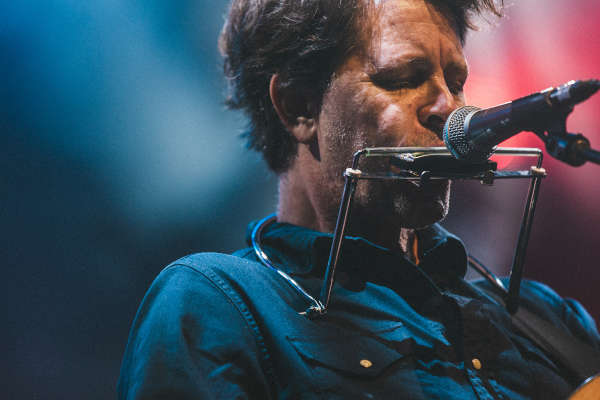 
After a cover of his favourite Powderfinger song, the lesser known 'Sail The Wildest Stretch', Fanning moved to the keyboard where he unexpectedly started playing the opening chords to 'These Days'. Fanning shined in this context. The audience was transfixed for the duration of the song and joined in to softly sing the melancholic chorus of the Powderfinger classic.

The last few songs of the set more than compensated for the slow start. The Black Fins returned to the stage along with Paul Dempsey, who joined Fanning in an explosive cover of 'Under Pressure'.

The crowd's excitement rose when Fanning strummed the chords of his feel-good hit 'Wish You Well', seeing masses of people rise from their seats to happily bop along. 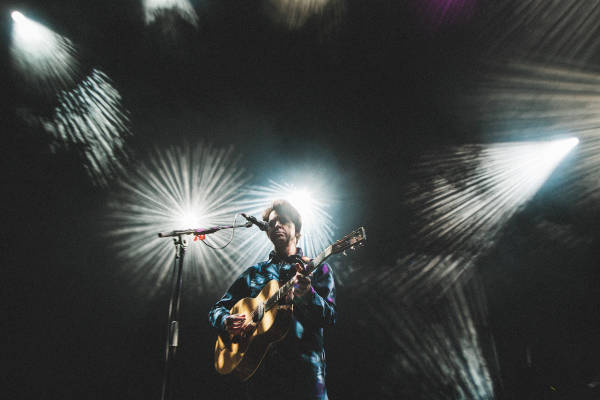 
The night ended with a bang as Fanning and The Black Fins wrapped up with 'Which Way Home?', gradually building to a medley of covers including 'War Pigs' and 'Iron Man', Bowie's 'Fame' and the rollicking rock & roll jam 'Blueberry Hill'.

COVID really did a number on live music, but festivals like Summer Sounds Festival give me faith – the event ran without a hitch and saw the audience buzzing happily as they filed out of the venue after a night well spent.

The collective memory of lockdown still hangs above Melbourne (Fanning even took a moment to congratulate the city for proving to the world that a wave could be suppressed), but events like Saturday's just make experiencing the joy of live music all the more special.
Tweet
« Review: Sheppard @ The Fortitude Music Hall (Brisbane) 2021 Bluesfest Adds More Aussie Talent: Pete Murray, Mark Seymour & Kate Ceberano »
back to top