Hats off to the Scenic Rim Regional Council for its bodacious project Arts Ablaze, a wide-ranging arts conference and festival of the highest calibre.


Held at the Ramada Resort Kooralbyn Valley (2–6 October), Arts Ablaze put Kooralbyn on the map with free music and theatre offerings from the cream of Queensland’s performing artists.

Skilled artisans held workshops, and the HeARTh space celebrated the breadth of young talent in Brisbane and regional Queensland. Food trucks provided a wide array of good grub, as did the resort itself. Arts Ablaze was a huge organisation feat that required bold vision and an appreciation of the vitality of the arts, and its potential for social good. Here are some of the musical highlights.

At the main event venue, 'Mununjali Bureebun; (Mununjali Dreaming)' started with a welcome to country and a showcase of First Nations performances from across Queensland.

'Kooralbyn' brought together artists from across the globe including First Nation, Tibetan, Celtic and Northern European musicians. Tenzin Choegyal sang a phrase of Tibetan origin clear into the night, and vocalist Kacey Patrick joined him, expressing her interpretation in her purest, soaring tones. 
Rebecca Karlen intertwined a melody with her traditional Swedish violin, and guitarist Andrew Veivers added pulse and the colour of flamenco to the growing body of sound. Jarred Fogarty’s didgeridoo breathed primal life into the music, now richer still with harmonies from John Reeves’ accordion and Rafael Karlen’s saxophone.

These sterling artists improvised over different musical patterns, their melodic hues representing the colours of the world. On the sidelines, Andrew Veivers said: “This has been a unique opportunity to explore each others’ individual musical backgrounds and the diverse cultural heritage represented in the group.

“We found more similarities than differences, and the process of combining themes and melodies from such varied cultures into stand-alone tunes felt perfectly natural and organic.”

The Haystack Mountain Hermits are a family of six multi-instrumentalists with quite peerless flair, and a touch of happy lunacy to boot! They played, wait for it, resonator guitar, mandolin, double bass, accordion, washboard, ukulele, banjo, snare drum, harmonica, kazoo, xaphoon. Yes, the xaphoon (played in a jazz idiom of course) did blow my mind.

The Hermits are: Kerrie Gambley (Mum), Dave (Dad), Jackson, Marcus, Lachlan and Ella Church. They played gypsy, country, blues, skiffle, bluegrass, and everything in between. They swapped instruments like it was a game of musical chairs and played them all like natural extensions of their limbs.

They sang very fine harmony effortlessly and with no reservation. I even loved the sound check, which was delightfully long and arduous so I could enjoy Ella putting the washboard through its paces. The sound engineer certainly earned his paycheck that night.

Before the show Kerrie Gambey said: “We do a wide range of eclectic music, and we’ve just picked stuff that we love. Because we started as a busking band, a lot of the music that we played when the kids were little was just music that made people happy.

“We’ve kept that happy vibe, and we just pick and choose really cool songs that we wished that we’d written ourselves.”


More crazy genius came in the form of Topology-THREE. Topology hail from Brisbane and is usually made up of saxophone, strings and piano. For Arts Ablaze they performed with drum-kit soloist Grant Collins, and tap dancer Monique Mengano. 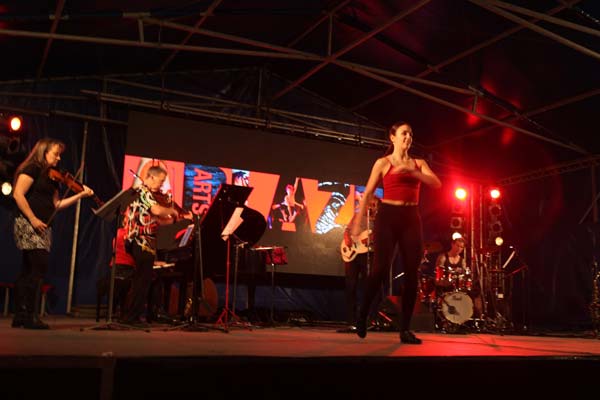 
Tap dancer Mengano held rhythmic conversations with the drum beats. That dialogue got pretty choppy. “We like the strange rhythms,” Davidson said. “Not because they’re intellectual but because they’re kind of visceral, and fun. They’re complicated in a fun, knotty sort of way.”

The Arts Ablaze weekend was a vast showcase of musical genres, from the zany, feminist, pop onslaught of The Ironing Maidens, to the quirkiness of The Inadequates at the HeARTh, to the community choir workshop led by Emma Dean to sing the Queensland Music Festival arrangement of 'Help Is On Its Way'. All in all, an epic weekend.