There is still a ridiculous rumour going around that metal is dying.


It’s like a gnat on the back of you neck you've been swiping at since the early ’90sl it’s a futile, ridiculous notion. In Europe and the US, more metal festivals occur than ever before, and more are in the making. Germany's Wacken Festival continues to sell-out year after year, six months in advance.

In the past weeks, the Forum Melbourne has sold-out twice with headlining metal acts. The first was Ace Frehley, and last Thursday (7 May) it was the unstoppable Swedish prog-death band, Opeth.

First up, as supports, were Melbourne’s dark-prog-death band, Myridian. They had the sound right, riffs were on the money, vocals aligned; but the lack of oomph and enthusiasm from percussion left them dragging heavy feet. It was a sell-out show, everyone had arrived early, yet Meridian failed to fully embrace the opportunity and give it all their worth. They have more, and I am sure the next time, with this new experience under their belt, they will deliver what they clearly have. Onto the main act for the night. Spanning an impressive 11-album catalogue of 25 years, everybody was left satiated with the daemon anomaly that is Opeth.

The set started with three of the newer, melodically-slower pieces, then widened over two hours with their earlier, deathly pieces and was intermittently broken up with laughter as vocalist/ guitarist Mikael Åkerfeldt cracked some witty jokes with entertaining gestures. For example: “You are very quiet tonight. Shall I play some Extreme?” before he starts playing a few bars of Extreme’s ‘More Than Words', jocularly continuing: "Who bought that album? Yeah, it was [extreme], but it wasn’t." 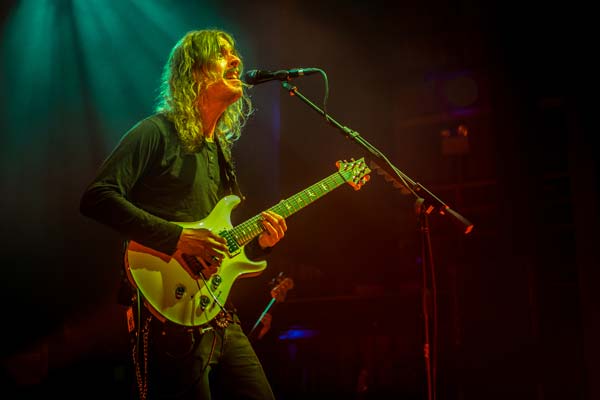 Later on, he called himself "Crocodile Fuckin’ Dundee" and told a story of how guitarist, Fredrik Åkesson, stole a sign of a tampon commercial they later used in an album sleeve.

The night ended, after a brief break, with the 14-minute epic ‘Deliverance’. It’s rare I say this, but, Opeth couldn’t have been any better.