From the very first moments of Musica Viva’s last Brisbane concert for 2016, it was obvious that we were in the presence of an extraordinary musical talent.


So astonishing was the beginning of Mozart’s Sonata no 35, in sound, in co-ordination, and in sheer musicality, that the audience almost gasped, and certainly held its collective breath.

Violinist Benjamin Beilman and pianist Andrew Tyson are both fast rising solo stars on their respective instruments, each of them winners of a host of international awards. Alongside their individual solo careers, they also find the time to engage in occasional concert series' as an exciting and talented duo, and are accumulating accolades for their superb violin sonata performances. 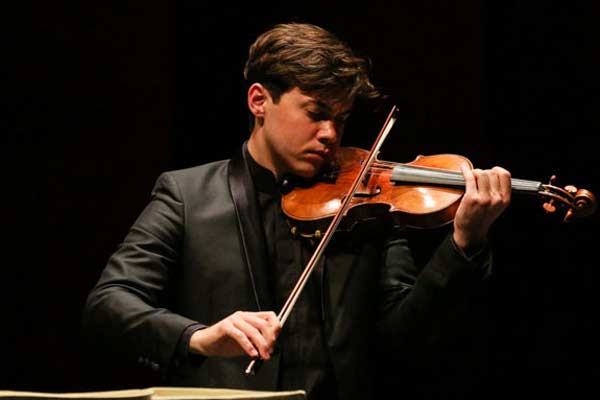 Their equal status as musicians in their own right was highlighted by the choice of pieces presented on Wednesday evening, all of which break free of the traditional violin sonata mould, where the piano merely provides an accompaniment for the violin.

Spanning well over two centuries, from the Mozart (1787) to Jane Stanley’s Cerulean Orbits (composed for Musica Viva in 2016, and premiered on this tour), via Saint-Saëns (Sonata no 1 in D minor) and Janáček (Violin Sonata), what all of these compositions have in common is the endowment of both instruments with an equal voice, with melodies shifting between instruments, and indeed hands(!), in a complex, richly textured and deeply satisfying dialogue, and allowing, at least on this occasion, for ample demonstration of the undoubted virtuosity of the performers.

The complexity and length of the preceding sentence may well serve as a pertinent introduction to the fact that the cyclic theme which pervades Saint-Saëns’ Sonata No 1 is identified as the inspiration for Vinteuil’s 'Petite Phrase' from Proust’s ‘A la Recheche du Temps Perdu’. In much the same way that this theme recurs throughout the sonata, so too does Charles Swann’s remembrance of the theme, and its emotional significance recur throughout the first part of what is generally regarded as the greatest novel of the 20th century. 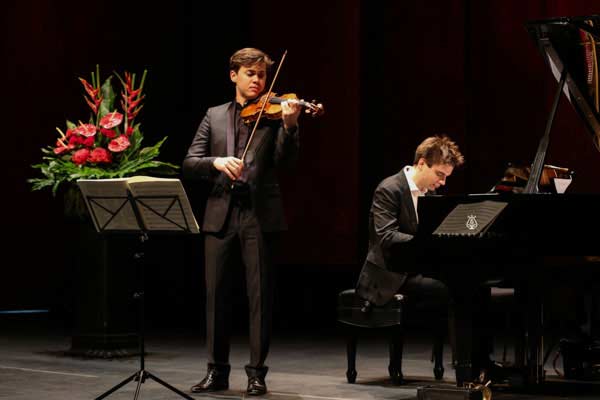 As well as providing inspiration for Proust (although he later played down the association), Saint-Saëns’ piece also tests musicians’ abilities with incredibly rapid and intense passages; at times the playing was so fast that the sound from the piano resembled a single continuously modulated note, mirroring the sound of the violin.

Before this, the Mozart, Janáček and Stanley provided further grist for this mill of excellence. The background of the First World War was evident in the menacing quality and tension in Janáček’s ‘Violin Sonata’ with the angry buzzing of the violin contributing to the unsettling quality of this at times tormented piece. Jane Stanley’s ‘Cerulean Orbits’ discards conventional key-based composition in favour of anchoring notes, around which a melody orbits; the first part of her atmospheric, mysteriously beautiful piece has a silky, sinuous and slightly sinister quality, with the latter part recalling a heat mirage, and inducing a sense of heightened awareness and hallucinatory strangeness – almost a ‘Picnic at Hanging Rock’ sensation.

Throughout much of the concert, we were in thrall to the almost supernatural purity of sound from the violin, and in the post-concert “meet the artist” Q&A it was revealed that, contrary to the information provided in the programme, the violin on stage was in fact a Stradivarius, ‘Lady Jeanne’ (made in 1731) on loan from Beare's of London. 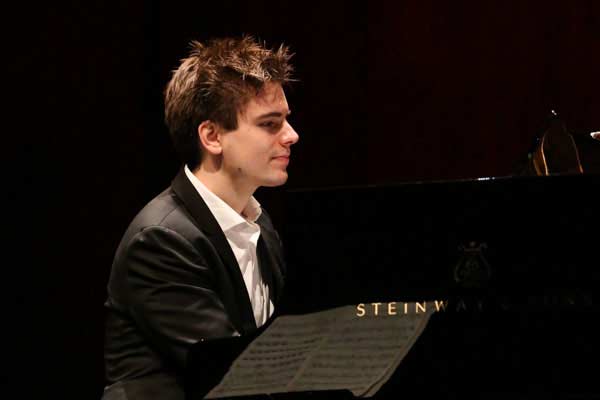 Beilman and Tyson are still very young, and therefore the breathtaking mastery of their instruments on stage was all the more astounding. This was a concert of exquisitely nuanced playing by perfectly paired musicians. We hope and expect more wonderful things from them in the future, and eagerly anticipate their next visit to Australia. In the meantime, this was a fitting high with which to end Musica Viva’s 2016 Brisbane series of concerts.