King Social: Mixing It Up The band's 'Big Man' EP tour saw them play their first Sydney show in May, with more city and regional dates across Queensland and New South Wales to come. “We probably only got about 150 people through the door,” lead vocalist and guitarist, Angus Milne says, “but that was not a bad effort for our first time in Sydney. Sony Music were there to watch us, and a few people from Chugg Entertainment. They've invited us back and we're doing three shows down there in November.”

Trading wide-open spaces for crammed, city band-rooms was a new sensation for the five-piece. “Usually the shows we're doing, in rural and regional areas, are either street parties, or outdoor festivals. The city shows, like Brisbane and Sydney, have just a completely different atmosphere. They're a lot more intimate.”

Before heading back to Sydney, King Social will play several Queensland dates, including a headline slot at Innisfail's Jam The Yah festival. “We played it once before with British India headlining, but we get to headline it this year; which is exciting. It's always a huge crowd – people come from everywhere. I can't wait.” 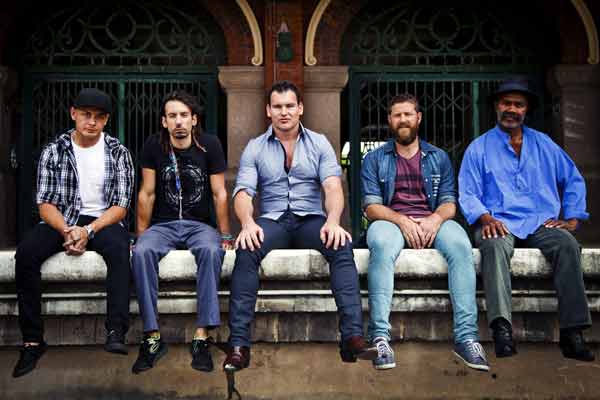 Nominated in the regional, country and urban categories at this year's QMA's, King Social have a very eclectic sound. Each member brings their own style, including Stevie Mitchell's hip hop rhymes and didgeridoo. “I write a lot of the songs with Stevie… I was in his [football] team. We used to get drunk at parties together. We actually came up with our first single 'It Goes Around' at a party.”

Angus brings a strong country thread through his earnest vocals. “I love American country music; it's like chocolate to me, it melts in my mouth... [the band] all hate it.” he laughs. “When I write a song, I don't really write it for a specific genre. It might be country, hip hop, reggae. Apparently we're not supposed to do that, but it's more fun.”

King Social released their 'Big Man' EP independently, under their own moniker 'Kings Productions'. “We got pretty excited at the start. I suppose you'd call it a label; we're not signed by anyone, we're completely independent. All of the money that's being put into it is out of our own pockets.”

Angus admits to being a self-starter, with both his musicality and management role within the band. “I've been into music my whole life, but i've just been secretly into it. When I was a teenager I was shy and wouldn't sing in front of anyone. I had no idea how to pull a band together, but I worked that out. It's something i'm making up as I go; learning along the way.”