It's all about (the face of) the bass, no trouble.


At just 23 years of age, Justin Bullock – now 25 – won the Queensland Symphony Orchestra's double bass section position in late 2012. Born in Sydney and growing up in Maitland (NSW), Justin learned the cello before switching to the double bass at 10-years-old. Playing with these notable stars will be Justin with his double bass. The face of bass explains his career in more detail:

Can you take us through your musical career so far?
I have been playing the bass since I was ten. I did my first paid performance when I was 14 playing 'Sweeny Todd' with Opera Hunter and have been in love with the profession ever since. I was involved with many training orchestras such as the Australian Youth Orchestra, Hunter Strings and when my family moved to Canberra, the Canberra Youth Orchestra. I studied performance at the ANU School of Music in Canberra with Max McBride. I started working with the Canberra Symphony Orchestra when I was in year 12 at school and eventually appeared as guest principal for several years.

My other work in Canberra included the Canberra International Music Festival where I performed alongside artists including Pekka Kuusisto, Lara St John and the Danish String Quartet. Soon after completing study I successfully auditioned for the Queensland Symphony Orchestra. 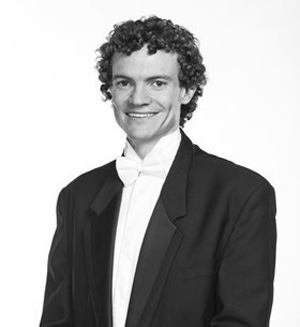 Why did you switch from the cello to the double bass?
I saw the Sydney Symphony Orchestra play when I was still playing cello as a boy and I remember being fixated on the bass section the whole time.

Who taught you how to play the double bass?
I learned off Paul Laszlo in Newcastle for seven years and Max McBride in Canberra for five years.

Do you play any other instruments?
I bought a classical guitar recently to pick up where I left off in school... I played piano and sung quite a lot when I was young. I like spending time on Logic messing around with electronica, but nothing substantial.


Is your family musical?
My parents met at their piano teacher’s house! There was always music in the house, I know a good deal of piano music note for note despite never playing the pieces my self and can't remember ever not knowing them. We used to play and sing together a lot growing up, it was always part of family life.

Do you think there's a stigma around classic music, that it's for an older generation?
Orchestral concerts are unique because they are accessible to all generations. A ten-year-old child could sit next to their ninety-year-old grandparent and engage and relate to great music which isn't as generation specific as other genres. When I grow old I probably won't go and see bands at midnight like I do now as much and I can see the allure of putting on nice clothes, eating a beautiful meal and seeing live acoustic music in a less rowdy, quiet environment. Having said that, I see so many young people at our concerts here for similar reasons, in a world that is getting noisier and busier, our concert hall experience gives you space to think, imagine and make up your own mind about what the music means.


What's it like playing in an Orchestra?
Stressful, but rewarding. Individually I am sitting there with a sheet of difficult music that I must interpret musically and accurately in unison with up to 100 other musicians. My reflexes have to be fast enough to adapt to the slightest movement by the conductor, even react to his/her body language and translate it into music. While all this is going on there is an endless Aural feedback loop where I am listening for and adjusting to the most minute differences between my own sound and the sound around me. The tolerances in question would be measured below ten milliseconds for rhythm and in cents, not hertz for pitch! When it all comes together in the end and I have committed as much as this detail as possible to my subconscious and enjoy the music!

What do you do when you aren't playing music?
I play soccer, tennis go bushwalking and camping. I like making things, brewing beer and cooking as well. I listen and think about music when I am doing these things a lot of the time so maybe it doesn't count. When you internalise/memorise music sometimes the hardest thing to do is turn it off.


Do you hope to travel overseas with your music?
I would love to one day, we live in a global community in the 21st century and musicians are lucky to speak a universal language. There is a lot to be learned from other cultures but I want to spend my life nurturing our Australian culture, which is so diverse, complicated and sometimes confusing. If I did spend a significant time out of Australia, this would eventually bring me back.

What are your plans for the future?
Music gives me a lifelong goal of becoming better and refining my mind/ body/soul, I think I will play for my whole life but you never know what will happen! I love being involved in the cultural landscape in Australia and I hope to work as an artist for as long as I can. I'd love to build and instrument one day too.

Anything else readers should know?
When I lived in Canberra I played electric bass in a crazy band called The Monotremes.