Such was the age of analogue; that pendulous and penetrating wall of sound; what we would recognise as three-dimensional; thick with texture, fat with harmonies and substantial in colour.

Perhaps the digital age has reduced this long-ago façade to 1s and 0s, but recordings from the '70s leave an indelible aural imprinted forever in the sands of chronology. Because those are cyclic captured moments in time, space and sound etched into our cosmos, forever more.

By virtue of personal gain from Herbie’s gig for Vivid Sydney (10 June), it was the pure cycle of symmetry we were openly welcomed into; a harmony that remains commensurate, balanced and perfectly-formed. 
Because when we reflect on the spheroid journey that is Herbie Hancock, we catch a career spanning seven decades; one that is of a musical prodigy who has traversed the path to musical genius.

From the age of 11 with Mozart’s Piano Concerto in D major before the Chicago Symphony Orchestra, to playing concert halls at Sydney Opera House for Vivid; some 42 studio albums later, a myriad of keyboards and technology, amid a never-ending quest seeking the roots of African-American music that delivers him full circle from 'Mwandishi' (1971) to his 2019 Les Enfant Terribles: African guitarist Lionel Loueke alongside James Genus on bass and legendary drummer Vinnie Colaiuta – this is why symmetry remains perfect; why Herbie’s circle is foolproof and pure.

And on this night for Vivid, the sylphlike antics of his music proved a siren call to many. A vast age difference could be rated in attendance: from the hipster youthful to the grandiose hip young-at-heart.

All flocked to soak in the magic Herbie has produced across the last 50 years, where his gritty textures set to that signature voltaic backbeat has pioneered an entirely whole era of jazz fusion; a genre falling blithely between James Brown-drenched funk or Donna Summer sensual-laden disco.

From Herbie’s spacey introduction set against his Korg Kronos – perhaps serving as a nod to George Clinton’s P Funk Mothership and interpolated by the foundations that is jazz funk (let us harken back to Fat Albert’s Brown Hornet shall we not) – to continual shifts with the classically-produced tones of the Black Fazioli Baby Grand Piano; one where we may even harken back to the touch of Bill Evans and ‘Kind Of Blue’.

But it is his Roland AX Edge Black Keytar that pulled out all the stops and ushered him into the 21st century. For while the analogue freshness of his tracks were pulled from the '70s, it was his delivery in the latest and greatest of keyboards where Hancock remains as a keys player's wet dream.

Enhance this with his vocoder, reminiscent to his 1979 album ‘Feets Don’t Fail Me Now’, with that subtle persistence of synthesised human vocals, well-modulated, warm in analogue tones yet crisp in feels, and it is quite unlike anything the digital generation knows how to cope with – even if digitally presented. So much warmth in high end tones, balanced by the cool of jazz fusion textures and augmented by a monster of a band. 
Let us include the insertions of African-Benin born guitarist Lionel Loueke’s Signature Soulezza Headless Guitar of course, where drumming techniques of vocals and guitar blend with fingerstyle picking and beatboxing style vocals to collide for a crisp take on jazz fusion; rich in musical tones and design.

And James Genus, not to be outdone by his fellow string player and likewise armed with his own signature five string Fodera bass guitar, is effortless in motion.

Genus’ playing is subtle mastery; presented in the fluidity of flowing basslines that comes across as offhand and deceivingly easy, but fully realised as complex in nature and delivery. When still waters run deep, it is the quiet ones you need to look out for.

And then there is Vinnie Colaiuta; he of the double kick technique, jazz rimshots, and cymbal rides. He with a pedigree spanning from Barbara Streisand to Joni Mitchell, Sting, Frank Zappa, Megadeth and Jeff Beck in a convoluted mix that is as dense and complex as a technique that can cover jazz and death metal. All hail the Colaiuta.

Undoubtedly on this night, as Hancock proffered key textures galore, and Loueke enhanced an already augmented fabricated mix bound by the cursiveness of Genus, it is Colaiuta who drives the band.

Like the tempered driver of a lush Lamborghini Urus, Colaiuta kept the balls of his feet on the bass drum with his wrists meandering across the kit for a flourish in drumming intensity. There is no limit to his ability, as he freely herded the harmonic efforts of his cohorts beyond the gates of harmonic unity and rhythmic obedience. Colaiuta is a force in obedience, and he easily wrested such modest and unselfish artists to a pulsing, overpowering will.

Track standouts start with 'Cantaloupe Island' from 1964 album ‘Empyrean Isles’. While this is a jazz standard performed by many, when it’s reimagined by its composer – not generally the norm where jazz standards are concerned – the effect is startlingly fresh; perhaps akin to the musical delivery from 'The Island of Dr Moreau' where Herbie is Moreau and Cantaloupe has evolved into a prodigious beast – minus the lacking in ethics and animal testing of course.

It is the perfect track to showcase each artist’s instrumental chops; from Genus’ rippling basslines to Loueke’s liquified fingerpicking and Colaiuta's driving pace. 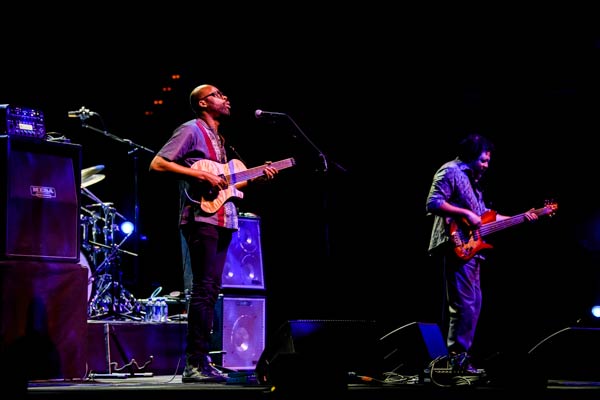 
'Actual Proof' from 1974 album ‘Thrust’ presented a demonstration of the track’s eponymous licks and syncopated beats powered by slick Genus basslines that cut to the bone, as Hancock embraces the entire track in electronic textured, drenched chords laying any straight four beats to waste in its rhythmic triple beat vibe.

It’s the kind of track that could question why a guitar exists, with Herbie manipulating the pitch wheel of his Korg to full effect, while alternating between Fazioli and Roland – where more pitch wheel ensues.

This is jazz at its highest art. Herbie the innovator, the pioneer to a digital age. Many may be called to Herbie Hancock’s chords and music; but the rare few are chosen to embrace it in its pure form where a classical touch perfectly converges with jazz movement.
Tweet
« Alice Ivy Brisbane Review @ The Foundry Ian Moss 2019 Australia Tour »
back to top