Blues Arcadia guitarist Chris Harvey said before the gig: “At Lefty's, they're there to party, and we're there to help them. So that's what we do. Bang bang, it's quite electrifying. We're there to work the audience. Get them to that bar, get them on to the dancefloor. So it's all gonna be real pumped, right?”


It sure was. Lefty's Old Time Music Hall has chandeliers, red upholstery and moose heads draped with hanging bras. Everyone’s got drinks and there isn’t a wine glass in sight. Blues Arcadia opened (28 August) with their own song, 'Sort It Out', (think John Lee Hooker's 'Boom Boom'). Patrons were on the dancefloor in no time as the band played originals 'Bullet', 'This Ain't Love', 'Rockin' Chair', 'Big City Lights' and 'Take The Money And Run'.

Cath, a close friend of the musos said: “I call their music dirty, soul-infused blues.” Blues Arcadia played dirty, played soul, played funky, played Latin, played Texas shuffle, played rock & roll. “We’re mainly an originals band,” said Harvey. “The more songs we write, the less covers we play. But our songs: it's like people almost know them; they’re familiar. So we play gigs where people are dancing, and we say: 'By the way, you are dancing to our original song.' And they go, 'Oh really!'”

The drinks flowed, the people danced. Patrons upstairs leaned over the banister to get in on the party. Blues Arcadia did dedications and covers too: 'Hound Dog', Freddy King's 'Big Legged Woman', The Fabulous Thunderbirds' 'One's Too Many (And A Hundred Ain't Enough)'. In BB King's 'You Upsets Me, Baby', keyboard player Parmis Rose dealt out a mean hand of Monk-esque licks. 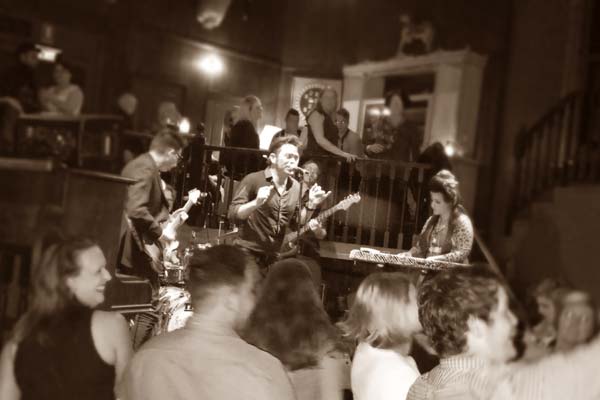 In a get-up-and-dance night, a rare concession was the band's sublime original ballad, 'Corner Girls'. Vocalist Alan Boyle's voice held the pathos in the balance as he sang his minor key story. He was whimsical and liquid, and we swayed to his lyric. He raised the pain a little and we were gazing at him through the bottom of our apple whiskey glasses. We wanted more whiskey and more Al. Harvey's guitar held a long note, bending and suspended, like the strings of our aching hearts. Oh it was SO the blues!

Blues Arcadia gave us a passionate performance and great music, and hammered home the argument that live bands are simply the best entertainment there is. After much whooping and hollering, they closed out the Saturday night party at Lefty’s. Next time they’re playing, make sure you see them.
Tweet
« 5 Favourite Adelaide Bands With The Winter Gypsy Shredfest II @ The Back Room Review »
back to top