Science has proven there is something uniquely special about harmonies created by the melding of the voices of family members. As electro-pop duo Auguste, step-sisters Skye Lockwood and Beth Keough, formerly of Echo and the Empress, emit melodies that are as enchanting as a siren singing you to shipwreck.

On stage, their beauty and feisty duelling vocals is reminiscent of Melbourne’s Alpine, but the sonic soundscapes that Auguste explore are mellower; this mellowness of sound starkly contrasts with the tumult and turmoil that lurks in the lyrics. ‘Siren Sounds’, the band’s third single, examines the crippling affliction of anxiety. Their debut single ‘Slow Motion’, touched on similar issues, with lines such as “over my head is a shadow” and “head in the clouds and it’s here that I lose it all; caught in the sound of my own thoughts”. At last count, ‘Slow Motion’ has received over 200,000 plays on Soundcloud, which augurs well for the fledgling outfit.

While the band only has six songs in their live repertoire at this stage, they have already collaborated with nationally and internationally renowned artists Andy Bull and now Japanese Wallpaper on ‘Siren Sounds’. All the ingredients are there for Auguste to join Tkay Maidza as the soundtrack to dancefloors worldwide. 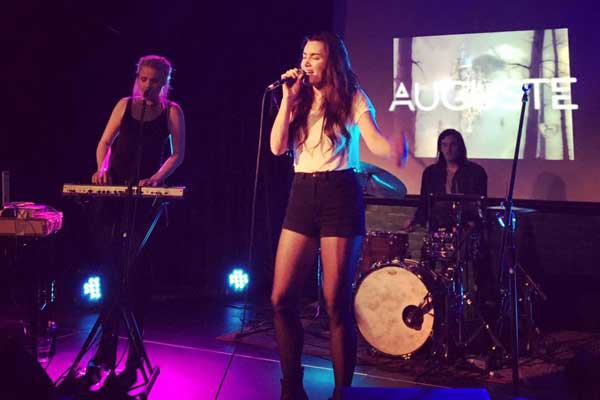 The bands in support for the evening (2 September), Mio and MANE, were a testament to the groundswell of talent in the 2016 Adelaide music scene. Stigwood Fellowship recipient MANE, the creation of Paige Renee Court, is blues-rock merged with dark Celtic folk. Court has a dark and enigmatic stage presence; it is as though she is practising a divine witchcraft, singing of houses of horror and murder.

All three bands on the bill are in their infancy, but have the potential to grow into spectacular successes. Adelaide is no longer a music scene with a handful of tall poppies, but rather a vibrant garden flourishing with an abundance of flowers. With this many flowers, there is an ever-growing buzz.
Tweet
« Nick Cave Week Arrives At Double J Deadbeat Society Are Ready To Launch Their Debut Album In Brisbane »
back to top