Almost a year since he released his most recent album ('P.M.'), and with interstate travel slowly returning to the 'old normal', in a couple of weeks Jarryd James will head to Brisbane.

Originally slated to perform as part of Brisbane Festival back in September, his show at Princess Theatre (2 December) will be the first time the 'Do You Remember' and 'Give Me Something' crooner will get to play to a live audience in Queensland since 'P.M.' dropped.

"I really wasn't sure that this one was really going to end up happening, but it's looking good a month out. I'm gonna play the album I never got to tour," Jarryd says.

Here, Jarryd walks us through some recent online purchases he's made.

I bought this so that I could do sh.t tattoos on myself and anyone who is at my place and is feeling like marking their body permanently. Got this from a vintage instrument crew in Hollywood, Florida. It's nice and big and warm sounding, and the best part is that I can't even use it because I live in an apartment building. My head is too big for most hats that exist, so when I discovered this hat brand that made caps in America back in the '70s and '80s called Imperial Headwear that actually fit me, I was pretty excited. For all those General Chemical, Wyoming fans out there. As you can see, I like old stuff. Not sure why, but I bought this from some guy on Gumtree for $50. I live on the Gold Coast where it's real nice to cruise around on two wheels, so this one was an essential. The kick-stand really informed my decision here. Probably the most important purchase on the list. During the earlier days of the COVID lockdowns there was a lot of 'Seinfeld' being watched at my place.

Whenever I see them eating Chinese food out of those little white boxes, it makes me crave it. But it just isn't the same eating it from a bowl, so I had to go online and order these guys. It makes the food taste better, really. 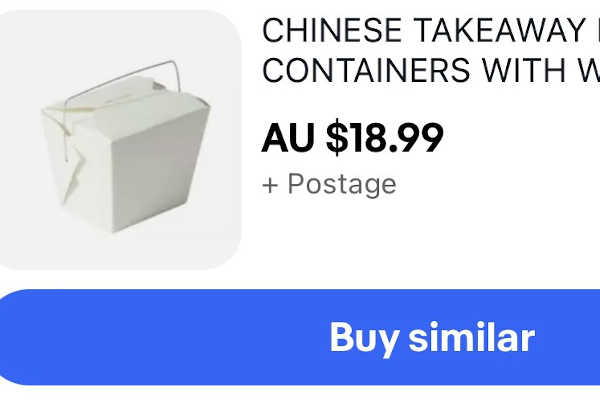