Malaysian-Australian author, poet, rapper and visual artist, Queanbeyan's Omar Musa is part of the 2022 line-up for the National Folk Festival.

A celebration of music's finest traditions – songwriting and storytelling – more than 200 folkies and contemporary musicians, poets and artists will descend on Canberra this Easter long weekend (14-18 April) for the 2022 National.

His work often deals with the themes of migration, Australian racism, violence, masculinity and loneliness.

"A spicy, sumptuous, soul-warming, celebratory noodle soup is all I need in this life of sin, but what are my top five?

"Hmmm, with this list, I know I'm approaching a topic so controversial, so contentious, that it's almost too hot to touch (literally).

"But even choosing this topic is a bit self-torturing, cos I've somehow contracted COVID for the second time in two months, and the UberEats options in Queanbeyan don't seem to include any of the following dishes.

"So, take this list as a cabin fever-dream of the broths I'm gonna slurp my way through next week, if the gods of plague and pestilence ever allow me to escape iso.

"I'm also well aware that within each of these choices there are countless subdivisions and variations.

"I'm not really approaching this in a scientific way. Ok, let's be real – this is pretty much just a stream-of-consciousness COVID rant of what I'd like to eat at this very moment.

"So let's rename this list: Omar Musa's Top Five Noodle Soups That He Feels Like Eating Right Now As He Drifts In And Out Of COVID Fever Dreams."

For heaps of Malaysians, an assam laksa is what counts as a laksa. It's very different from the curry laksa that Aussies are used to – it's tamarind-driven, fishy, with an after-tickle of mint.

It's sour, sharp, and tangy. It's polarising. But just like the king of the fruits, the durian, I believe the best things in life are an acquired taste.

When I was camped in Penang for a few months working on a book, I would trundle up the road every day to the Penang Road Famous Laksa, slurp one down and then cool my taste buds with an ais kacang from across the way.

Speaking of Penang, that's where my parents met. When my mum moved there from Australia in the 1970s, she lived in a Chinese fishing village, and one of her neighbours scribbled down a recipe for assam laksa, including mackerel and tinned pineapple, which I keep in pride of place in my kitchen.

Like a violin passed down through generations, surviving wars and migration, providing the soundtrack to rises and falls, love and grief, the assam laksa recipe, equally resonant, will, I'm sure, outlast me.

If I was a food historian, I could unpack the layers of history behind a dish like this, one of the oldest beef noodle soups in the world, favoured and flavoured by Chinese Muslim communities, and tell you a noodle-long yarn about trade routes, dynasty, religion and empire.

But I'm not. I'm just a basic, crook poet in iso, about to press 'place order' on Domino's on UberEats, but dreaming of fragrant broth.

One of the most impassioned debates I've ever had with a friend was over a steaming Lanzhou braised beef noodle soup on Swanston Street.

We chewed through topics like hand-pulled noodles and tender, fatty beef, ranging from politics to language to the new Kendrick Lamar.

The debate (ok, it was an argument) rolled on and on as the broth level got lower and lower, right down to the last slurp, when the spoon went ding on the bottom of the bowl.

That night, all my mate and I could agree upon was that the beef broth was f...ing delicious, this is the spot and let's come here again.

I look forward to another broth-fuelled 'debate' next time we hang.

I always butcher this quote I once heard, about how the two greatest stalwarts against the overwhelming evil of the world are literature and friendship. Replace 'literature' with 'noodle soup' and the quote works just the same.

Me and my mate Tiyan, a fellow Bornean-Australian broth lover, went back and forth for hours on this. Beef bones, garlic skins and dried shallots littered the battlefield.

Then, I suddenly realised I was doing that thing. That thing, the hipster pick, when you're straining to show off what exquisite taste you have, searching high and low, ignoring what's right in front of you.

Like, I've seen this many times before: a hip hop head agonising over their top ten rappers of all time, fretting over whether Nas goes here, or Andre 3000 goes there, or whether to squeeze in Rakim and drop out Biggie, forgetting that if you looked in their 'most played' section of iTunes, there's a high likelihood Drake or Kanye would be a million plays ahead.

So what noodle soup would be the my 'most played' section of my kitchen? Broke Noodles. Never heard of 'em? Of course you have.

Broke Noodles is when you can't be bothered putting too much effort into a meal, but you want an immediate hit of deliciousness and sustenance, so you upgrade a packet of instant noodles, whether it be Mee Goreng, Mama Tom Yum or Shin Ramyun, with whatever you've got lying around – a couple slices of onion, a few wilted leaves of bok choi from the vegetable drawer, an egg stirred in as it reaches boiling point.

Sh.t, maybe if you're lucky, you've even got a couple frozen dumplings in the freezer or some bean-curd knots in the corner of the cupboard. Broke Noodles has warmed the belly, no, saved the life, of many a student, artist or tradie, all around Australia, all year round.

For years, pho and laksa have been in a neck and neck race for number one spot in the hearts and minds of Australian noodle soup lovers (ramen is a dark horse, constantly making ground).

If you can believe it, I was already NINETEEN years old when I first tried pho. I was studying at uni in Santa Cruz, California, at the time, and my housemate Kenny, a hilarious stoner and b-boy from San Jose, looked at me like an alien when I said I'd never eaten it.

To be fair, it was the early 2000s – pho hadn't had its moment in Queanbeyan and Canberra yet. In fact, only in the past three years have we finally got a pho spot in QBN (Sai Gon Pho – it's mad, well worth the hunt down the alley next to the TAB).

So, Kenny insisted we drive all the way to his favourite Vietnamese spot in San Jose, an hour away, and try the delectable bone broth in the morning, cos every pho connoisseur knows that if the broth has been simmering overnight, by breakfast time, it's almost perfectly clear, but every molecule has now been infused with aromatic spices, a flavour bomb ready to explode on your taste buds.

Since then, I've travelled all over Vietnam, trying phos up and down the country, and always enjoyed hearing the impassioned arguments about where had the best pho, North or South? Do the garnishes take away from, or enhance, the delectable purity of the broth?

Like the assam laksa recipe in my kitchen, these debates will endure long after I'm gone.

In the West, there's often this idea that a soup is an entree. What I love about pho is that it's a whole meal – it includes every major food group, it has the hearty heat of the noodles and broth perfectly balanced by the freshness of the herbs and veggies.

Not only that, there is something verging on sacred about the ritual involved in tasting the broth, adjusting it with just the right amount of Hoi sin and Sriracha, squeezing a bit of lemon into it, then tearing the Vietnamese mint and scattering it with bean sprouts over the pho as if you're sprinkling rose petals at a deity's feet.

It'll come as no surprise to anyone who knows me (to be fair, most of you won't), that I'd have to put laksa number one, and a variety from my homeland Borneo, no less.

I've dedicated heaps of my music and poetry to the almighty laksa – the most decadent of all noodle broths, the king, the kween, the alpha, the omega.

I've had laksa t-shirts printed up as merch. I've shot a music video with someone bathing in real laksa (wouldn't recommend). A$AP LAKSA is one of my rap aliases (Batik Swayze and Kendrick Lemak a couple of the others, in case you were wondering).

The Sarawak laksa, to my mind, combines the robustness of the curry laksa, with the zest of the assam laksa. The broth base has sambal belacan (chilli shrimp paste), lime, garlic, lemongrass, galangal, then coconut milk added to swirl it up nice and creamy.

Top it off with bean sprouts and strips of omelette, shredded chicken and prawns, coriander and lime wedges, and it's a heady blend, proper sustenance for the soul. It's all the elements.

I've had it in the middle of the jungle in the Kelabit Highlands, I've had it in the suburbs of Kuching with the tattoo artists who gave Anthony Bourdain a hand-tapped tatt (and also gave me some of mine) when the renowned chef came to Borneo. . . chasing what? The very same Sarawak laksa. He called it 'the breakfast of the gods', 'the weapon's grade plutonium of breakfasts'. Who am I to disagree?

To be serious for a moment, while I think Malaysian food, especially something like the laksa, is rightly celebrated, as a sumptuous representation of cultural cross-pollination and cosmopolitan, intertwining histories, there is a dark side that often goes unmentioned.

The reason Malaysian street food is often so cheap is because migrant workers are underpaid and exploited for their labour. The seafood used in delicious Bornean dishes is often caught by stateless workers who have no access to rights or medical care.

Hell, there are even people throughout South East Asia who have quite literally been enslaved for their labour in the fishing industry. It's easy to mythologise cuisine, but (I think), important to realise that every myth has a jagged edge.

But to end on a positive note, here's an artwork for you all, from my new book 'Killernova', out through Penguin Random House Australia now, celebrating my favourite noodle soup of all, the mighty laksaaaaa. 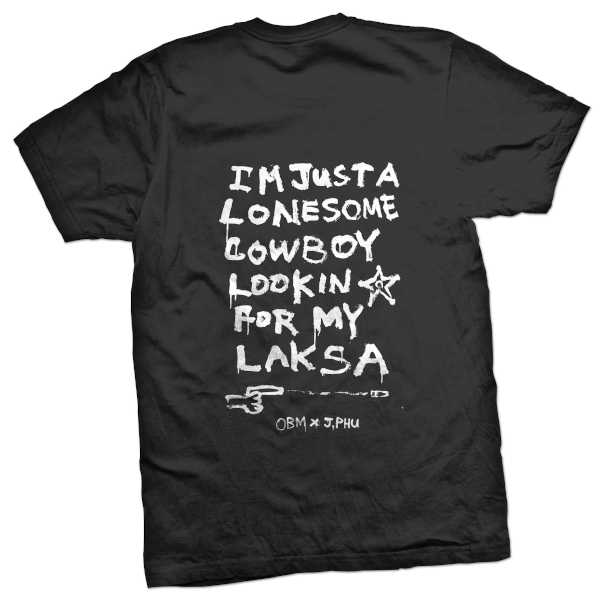