There are a great many things Bluesfest gets right, but this year they got it especially right.


The magnificent smorgasbord of all the flavours of the blues was utter perfection and the calibre of artists impeccable.

My favourite thing about this festival is that you know you’re going to leave with a pocketful of brand new favourites you didn’t even know existed. This year I left with my pockets bulging.

Kicking off Thursday evening was the explosive, high frequency Nahko And Medicine For The People. With conscious tribal anthems that mix acoustic rock, spoken word, gospel influences and reggae beats, Nahko And Medicine For The People delivered a set that had everyone bouncing along on the current of positive vibes they projected from the Mojo Stage.

Nahko and his band were fantastic. The music is certainly medicine, pouring through every cell of my body to dissipate whatever negativity there was. The highlight of the set was undoubtedly Tim Snider’s inspired fiddle solo, which intro’d the politically and emotional charged 'Dear Brother'.

As the set builds, so does the energy as Nahko’s incantations of positivity and a hopeful future fill the tent. He recites a poem he wrote the day before, and it’s a powerful proclamation of the universal love he’s committed to spreading everywhere he goes. 
There simply isn’t anything that can prepare me or any of the thousands of blues worshippers gathered at the Delta Stage on Day 1 for the blistering performance we’re about to behold.

Wearing green flared pants of the shade that doesn’t ask permission and apologises to no one, Fantastic Negrito stalks up to his microphone, a golden Gibson slung under his arm. He is incendiary, from start to finish. Channelling tales of a hard, long life, with a vocal range and delivery that sucks you right into the pain, lust, torture and defiance of this modern-day protest singer.

It’s almost impossible to draw any kind of comparison between Fantastic Negrito and any other artist. Somewhere between Freddie Mercury, James Brown and Robert Plant, with the storytelling prowess of Tom Waits, this is a man who has seen a lot in his time.

Fantastic Negrito is something to behold. Through songs like 'An Honest Man' and 'Bad Guy Necessity' he howls, snarls, he whispers and laments death, addiction, violence, racism, crime, narcissism, exploitation, and dishonesty through stark and powerfully real lyrics.

The 51-year old Grammy Award winner pulls no punches in his scorching social commentary. The music is an explosive fusion of Delta blues, smouldering soul and gospel rock churned out through grinding, dirty guitar licks, hard-stomping riffs and smoky-blues beats infused with the kind of funk that grooves you from your head down to your toes.

He closes his set with funky blues number 'Bullsh.t Anthem', with everyone singing along to the uplifting chorus of “Take that Bullsh.t, turn it into good sh.t.” I can’t lie, Fantastic Negrito was my ultimate festival highlight. Hands down. 
Making a much anticipated Bluesfest debut this year was soulful belle of the blues, Samantha Fish. Her debut was simply put, staggering.

One of the most impressive guitarists and live performers of the festival, Samantha radiates a blend of sultry femininity and fire-spiritedness grit. From the outset of her performance, she had the audience eating from the palm of her hands. This lady is a force of nature.

With Marilyn Monroe tresses, a silky-smooth voice and bad-ass guitar playing, she effortlessly shifted gears between rocking blues and country Americana. Her Friday night performance in the Delta Tent totally blew me away. She is an exceptional guitar player and majorly charismatic performer.

With her six-piece band wailing behind her, Samantha belted out the blues like a woman scorned. Throughout her set, prominently featured songs from her two 2017 albums, 'Belle Of The West' and 'Chills & Fever', showed off her creative songwriting and virtuosic genius.

She’s a master who has rewritten the rules and boundary lines of the blues to fit her own, smoky essence. An essence that seeps through her diverse range of blues, country, R&B and rock, to tell you loud and clear that this is one rising star you want to watch, every damn chance you get.

After gaining a solid following of folk and roots fans at his 2017 Bluesfest appearance, the gorgeously soulful Trevor Hall walks out barefoot onto the Jambalaya Stage on Friday night to a packed audience. His smoky voice and spiritually-charged songs had everybody clapping and jiving.

Before launching into 'Om Shakti Om', Trevor tells us it’s going to be a collective effort and asks us to sing along, and sing along we do. But it’s his rendition of Paul Simon’s 'Diamonds On The Soles Of Her Shoes' that really raises the roof with the collective voice of the audience.

Nahko joins Trevor Hall on stage for 'Hello Friend' and everyone loses their minds. Maybe it’s the full moon, maybe it’s the bliss spell Bluesfest casts every year, but I am absolutely sold on this humble artist so gracious and generous with his gratitude. I feel like I’ve been baptised in good vibes and it feels good. 
Well hot damn! Vintage Trouble’s dynamic stage presence and unhinged guitar-powered blues-rock, flavoured with funk, soul and R&B completely floored me, and everyone else in the crowd on Saturday night in the Mojo Tent.

Frontman Ty Taylor is a dynamo. He gives it all, jumping, strutting, spinning and writhing all along the stage like he owns it. This man is absolutely riveting, with the kind of stage antics dreams are made of.

Before tearing into their freshly released 'Everyone Is Everyone', Ty has everyone high five somebody they don’t know, and it’s beautiful.

As the band launches into their final number for the night, the pounding anthem 'Run Like The River', Ty runs right through the crowd up to the sound desk before launching himself from it and crowd surfs his way back to the stage, even pulling himself up into a handstand halfway there. That’s my kind of trouble. 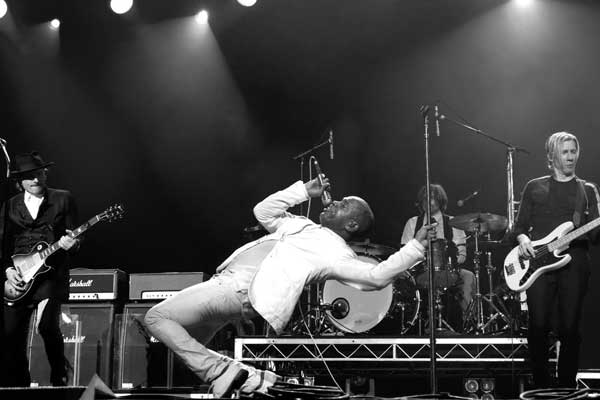 
The eight-piece neo-soul group from Denver, Nathaniel Rateliff & The Night Sweats plied the Mojo Tent on Sunday night with a life force so pure, triumphant and undefeatable it was impossible to be uninfected.

Even the songs that delve into the more painful aspects of human experience, like addiction, depression and loss or the sorrowful love song 'Wasting Time' still find seeds of hope in the band’s uplifting sound, selling you on the notion that hope is never truly lost. 
Nathaniel Rateliff is on fire, coming off like a man possessed, he changes guitars by throwing them into the wings. We are all in rapture. They close the set with the foot-stomping anthem 'S.O.B' and I’m already pouring over the programme, praying they’re playing one more set. Theirs is a sound that will never grow old.

Melbourne R&B star Thando takes to the Jambalaya Stage on Monday afternoon and good god, can the Zimbabwean-born artist sing. Her big-bodied vocal range and delivery is impressive.

Grooving and grinning with an infectious bliss that’s spreading through the crowd like wildfire, she may be into her third trimester but Thando is in the zone.

From the moment she launches into her opening song 'Numb', she’s in complete control. Commanding both the stage and the audience with her lyrical genius and smouldering groove, her powerful voice is rearranging my hair follicles.

Belting out lyrics of hope, gratitude, authenticity and self-love through songs like 'Happy', 'Heaven' and the super-sexy 'Naked', she’s an artist with a powerful message, a voice to match and soulful live performance.

The jazzy R&B sound delivered by her band makes it impossible to stand still for even a second, while her soul-drenched vocals crests and falls on waves upon spine-tingling waves of raw, unfiltered emotion. 
The towering figure of Ray LaMontagne and Wilco bassist John Stirratt take to the Crossroads Stage on Monday as the sun begins to set. A hush falls over the audience as that unmistakable breathy voice, which has the power to wrap itself around your heart and tug lilts into 'No Other Way'.

It’s a sharp U-turn from the big band set-ups and high-energy performances I’ve been soaking up the last four days, and it’s exquisite. LaMontagne is flawless.

Subdued and introspective, his powerful, emotive voice commands the attention of everyone in the tent, who sways in reverence to the gentle strumming and gorgeous harmonising of the duo, before erupting into roaring appreciation at the end of each song.

Highlights were his performances of all-time favourites 'Jolene', 'Such A Simple Thing' and 'Trouble', whereby he closed his set with the audience singing at the top of their lungs along with him.

We were expecting a lot from Bluesfest for their 30th anniversary, and my God did they deliver. Hats off to every, single person involved to make Bluesfest 2019 the soul shakedown party that it was. Kudos.
Tweet
« Snowtunes 2019 Reformed Yothu Yindi Headline Queensland Music Festival’s Yarrabah Festival »
back to top