The classic tale of 'Orpheus And Eurydice' gets a modern retelling in 'Orpheate', the new short from filmmaker Ruby Bell.


The film stars Andrew Neaves and Ximena Medina in the titular roles. Ruby is also the daughter of cinematographer Mandy Walker (who worked on the 2020 adaptation of 'Mulan' and is currently working with Baz Luhrmann on his 'Elvis' film).

Ruby is showcasing this, her directorial debut, at a special Best Of Australian Shorts programme of Flickerfest on the Gold Coast. We sat down to have a chat with her about her film and what it means for it to be featured in a 'best of' event.

This is your directorial debut. Tell us a little bit about the story!
'Orpheate' is based on the Greek myth of Orpheus and Eurydice, which is a story I had an affinity for when I studied Greek mythology at school. Orpheus is a talented young musician who loses his lover to the King of the Underworld through a fatal snake bite. He is promised she will return with him to the life they used to share on the condition that he never checks that she is indeed following him. The anticipation of not knowing whether or not she is there, and the stomach drop of the conclusion is one of my favourite narrative tropes of all time so I found it so fun to put a modern visual spin on it.

It's being presented within a programme called Best Of Australian Shorts...! How does it feel to have your work be part of the 'best' of an event?
It’s really humbling to know that after I made a lot of instinctual decisions to put a project together for the first time ever I’m not barking up the complete wrong tree! Making a film is comprised of a lot of gut decisions, captaining that is a lot of pressure so I’m glad to hear that the ones I made translated well. It really was a group effort to problem solve the difficulty of the production and it’s so relieving that the risks we took worked out to set the film apart. I’m really proud of the project and really honoured to have it tour with Flickerfest alongside other extremely talented filmmakers’ projects.

What are you most looking forward to about having your film be part of Flickerfest?
Flickerfest is such a prestigious festival, I was so excited when 'Orpheate' was selected to screen there. I feel so proud to share with people that my short film was chosen to be a part of a festival that people all over the world have heard of. Plus, beyond just being able to be a part of it all finally, it felt like a really fitting place to debut my film career in the city I grew up in. Especially given the current circumstances, it really feels like an anomaly that a film festival can so comfortably tour and have screenings so it’s great that people can actually see it. Why do you think the film belongs within Flickerfest's programming, aside from the fact that it qualifies as a short film?
Flickerfest always chooses such a fantastically wide variety of films that flow so well next to each other in the programming. Curation that makes us laugh, it makes us cry, and it makes us jump in our seats. I’d like to think they saw something in 'Orpheate' that offers a unique viewing experience and allows the audience to walk away feeling something. 'Orpheate' belongs in the next generation of film, one that is aided with technological feats and brings you along for a ride. We came up with some pretty clever ways to bring the well-known story to a new place, my favourites of which are the depiction of the snake and the way Eurydice’s will-I-stay-or-will-I-go is revealed.

What, in your opinion, makes a good short film?
Short films are one of my favourite media types because there is so much more pressure to move the story forward. I love the punchiness of being introduced to a situation and riding the ups and downs through to the finale in such a concise manner. Short filmmakers need to edit down to the most compelling parts of a short story and it is so amazing to see how clever they can be and feel so many emotions in such a short period of time. As much as I love the drama and the intensity of a feature-length film, a really good short film has you always awaiting the next part of the story with full focus.

Do you have a particularly striking memory when you reflect on the making of 'Orpheate'?
It was really nice because initially this project was something I planned to shoot in someone’s backyard with five friends. As we developed the project and shared ideas with other aspiring filmmakers they really wanted to join forces with us and bring what they could to the table including drones and camera gear. Plus, fortunately I reached out to a gripping company called Cinemoves to ask if they had any advice on how to shoot a particularly difficult shot and they offered to let us test out a camera head they were developing if we shot that scene in their workshop. The post-film-school backyard project really grew up on its own as it came to fruition – the first day showing up on set and seeing what it had become was such a 'pinch me' moment. 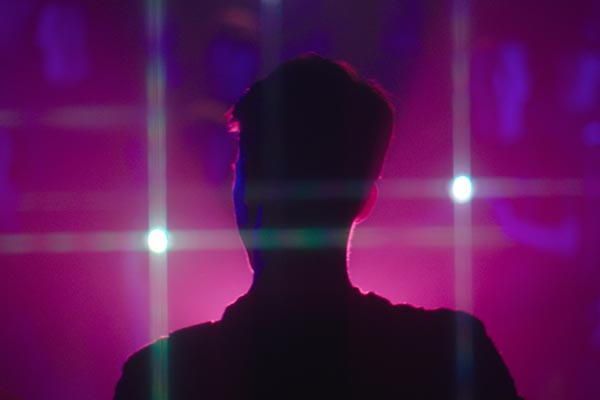 What were some of the challenges you faced during the making?
I really came in with some big ideas for shots on this film. Including, but definitely not limited to, an extraordinary rigging gig that has the camera fall back with someone slowly but in real time and a continuous shot transitioning between night time lighting to morning lighting. We were all first-time filmmakers so the fun of it was figuring out these challenges. I’m happy to report that we came up with a solution to every single difficult shot, which only made it all the more satisfying. The other notable challenge was the initial problem of not having any access to sound equipment, which we initially resolved by not having any dialogue. But when the possibility to shoot dialogue became available, we decided to have the characters speak in prose, which felt like it was in the same thematic vein as Greek mythology and felt like an interesting combination with modern visuals. So in the end I think that one was a blessing in disguise because we came up with something more unusual than expected for the film.

What is the intended reaction to 'Orpheate'?
I’m very aware that at this point in time it is common to watch media while doing something else, such as being on a phone. I am such a visual person, I love watching movies and TV shows where the joy comes from actually looking at it and enjoying what filmmakers have come up with to show the story beyond just pushing the narrative forward. I really wanted to utilise the magic of cinema in capturing the story, and bring in the audience to really watch the shots. In a way that the joy of watching it comes from actually watching the screen, so if you were on your phone during that last scene then you missed something. A visual poem is the best way to describe what we set out to make. One of the most common reactions when I first showed the film to people was as soon as the first credit came on screen they turned to look at me and said a gut one-word emotion to the ending. That’s really important to me to be able to walk away having felt a sentiment – something, anything – when going along with a story because it means it went beyond the base layer of hearing a story and pulled a feeling out of you.

'Orpheate' is on as part of Flickerfest's Best Of Australian Shorts programme at Home Of The Arts (Gold Coast) on 28 October.