Paul Henri ('Glitch', 'The Very Excellent Mr. Dundee') and James Ballard ('Sengatan') have garnered the attention of film festival curators in Australia and abroad thanks to their combined creativity, some accessories, an app called Filmic Pro and an iPhone XS.

The existence of 'No Hard Feelings' proves that you don't need thousands of dollars of equipment and technology to create something good enough to be recognised internationally.

Paul and James sat down to chat about 'No Hard Feelings' and its success.

What has it been like to have your film be recognised overseas?
James: Great! Perfect excuse to take a few tax-deductible trips abroad! At least I hope they’re deductible.
Paul: It's fantastic! The more people that get to see it the better. We went to a festival earlier in the year that Renée Zellweger was at. She never actually watched our film. . . But if she had I'm certain she would have loved it!

Where did the idea behind 'No Hard Feelings' originate?
James: Once again, we were looking for a tax-deductible trip overseas. We have a bunch of connections in Bali so we kind of whipped up an idea around what locations and gear we could get our hands on. The film’s about an emotionally fragile man, Rodney, who compensates for his crumbling masculinity and ego by working out too much, drinking too much, placing his self worth in every woman’s perceptions of him too much. I’m not going to say it’s autobiographical by any stretch but there’s a little bit of Paul and I in there somewhere. We just stretched it to the limits of credulity.

And what was it like to shoot this with an iPhone?!
Paul: Plenty of pros and cons, luckily we had a very dedicated and talented chap named David Cleeve as our cinematographer.
James: It was actually a blast. An iPhone doesn’t really stand up to a proper camera in terms of usability or resolution or light sensitivity or what have you, but if you stop treating it like one, it kind of opens you up to not be so precious about everything. We shot this film like we were back in high school with a DVcam. What you see on the screen is what you get and that’s that. Creativity is better with some limitations and as someone once said ‘perfect is the enemy of finished’. Once you abandon perfection the fun begins. Having said all that, the footage certainly looks better than it has any right to considering it was shot on a telephone. Pretty mad really. 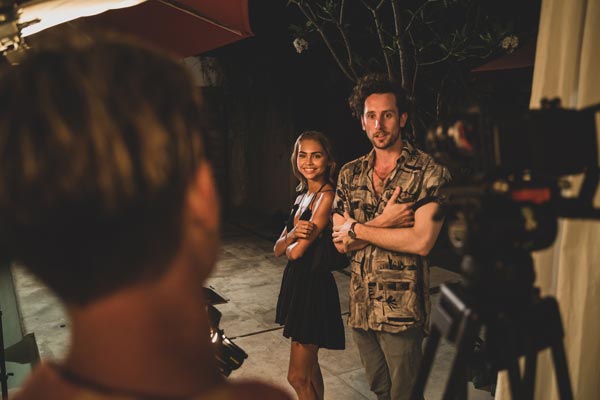 On a scale of 1-10 how possible is it that you'll do it again?
James: We're bang up for it. That sense of fun and freedom you get not worrying about the camera and embracing its quirks and charms is very enticing.
Paul: Ten! We are going to shoot a proof of a concept for a tropical retro horror the second the borders open back up to Indonesia. Filmic Pro have just released a new update and we hear it's pretty darn fresh.

What was each of your favourite parts about shooting this film in Indonesia?
Paul: Riding around on motorbikes with our Indonesian producer Made looking for our next location then eating a huge bowl of delicious extra spicy Nasi Goreng. We did that a lot.
James: Everyone in Bali has a kind of ‘can do’ attitude. No one is moving too quickly so they’re happy to come along and be an extra for half a day or give you their restaurant for an afternoon for a scene or help you lug camera gear to a deserted beach for sunset. Of course the flip side of no one being in a rush is it’s a bloody nightmare trying to tightly schedule a film shoot. Swings and roundabouts. You adapt and overcome. Oh and a massage at the end of a day costs you ten bucks so that’s pretty nifty.

Paul, what is one thing you've learnt in the making of this film that you didn't know before?
Just how much I love playing a man having a nervous breakdown. It's great fun and I think it's my permanent inner state. I'm not a relaxed person.

And you, James?
Paul is not a relaxed person.

What advice do you have for budding filmmakers with an iPhone and a vision?
Paul: Make films like the ones you loved growing up. Don't try and fit in with the crowd. Oh and download the Filmic Pro app to help make your movie.
James: Don’t go too big straight away. Make a bunch of small films and make sure you finish them. Don’t quit when you get bored. You learn a lot from finishing things. Finishing a film puts you into a very select group of people who actually follow through with their goals.

What's next for the pair of you?!
Paul: We're currently working with one of the major studios in Los Angeles on a series that we have had in the pipeline for a little while now. So we look forward to being able to share more about that soon!
James: I’m going back to Bali as soon as COVID gets lost. I don’t care if it’s deductible or not.

'No Hard Feelings' will next play live and virtually at the 48th Academy Award Qualifying, Athens International Film & Video Festival in 2021. For more information please check for updates here. It will also screen at Byron Bay Film Festival on 24 October. More information here.