'Next Train From Castlemaine'

While Director Melisa Visca was a Bachelor Of Film student at SAE Institute in Melbourne, she began work on a film called 'Next Train From Castlemaine' – which has now gone on to be selected for film festival programmes around the world.


The film depicts a bittersweet and emotional drama about an old, recently widowed man battling to keep his independence.

Melisa began the film with Screenwriter and Creative Producer Heidi Ylä-Ajos, and the rest of 'Next Train From Castlemaine''s credits consist of SAE students from the film and audio bachelor programmes. Festivals the film has been selected for include the International New York Film Festival, Lulea Film Festival Sweden, Lift-Off Global Network in Toronto, Golden State Film Festival and more.

Here, we have a chat to Melisa about the creation of the film and the success it has been met with, not only locally, but internationally.

Firstly, congratulations on your success with 'Next Train From Castlemaine'. Tell us a little bit about the film.
Thank you, it’s been an amazing journey so far. 'Next Train From Castlemaine' is about an old, recently widowed man, Ronan, who battles to keep his independence and is forced to make decisions that might change the course of the rest of his life as his daughter, Daisy, is moving him into a nursing home. The film dives into some of the issues that our loved ones face when they become more dependent upon their children or younger family members, exploring themes of loneliness and feeling forgotten about even though our elders still have valuable time still ahead of them. At the core of this story about this father and daughter relationship, 'Next Train From Castlemaine' is about how forgotten dreams can still be achieved no matter your circumstances.

A person has just finished watching 'Next Train From Castlemaine'. What is the ideal reaction/how would you like for them to feel?
Ideally, a sense of love and connection to their own loved ones. We really wanted to keep the ending of our film open for the viewers' interpretation as everyone would have a different emotional experience to the story depending on their own personal experiences throughout their lives. We hope that it touches people’s hearts in a way for them to reflect on their own relationships with their loved ones and find it in their heart to truly allow empathy and understanding in, for those around them.

You directed this film when you were a student at SAE. What was it like to be part of the project while still studying?
'Next Train From Castlemaine' was our final project while studying at SAE. I had formed a great bond and working relationship with a number of other students whilst studying, the most prominent being with Heidi Ylä-Ajos, who is also the Writer and Producer of 'Next Train From Castlemaine'. We had such a great experience making this film in our final semester and the support we received from SAE was definitely a driving factor in our work ethic and inspiration in bringing the story to life. However, we put in a lot of hours and sleepless nights, for me at least, to make this film the best it could possibly be and do the story justice. We definitely came across some challenges and were very grateful to have the guidance and support from the faculty and our mentors at SAE to get through them. 
What was your favourite part about attending SAE?
I was always surrounded by open, like-minded and creative people no matter what discipline, whether it be other students or faculty. Film is a very collaborative art form but can often times feel quite lonely and deflating, so I would say that my favourite part about attending SAE was the supportive environment that surrounded me the entire time I was there, and I’m so grateful to say continues on now after graduating. It was very encouraging to walk into campus every day and see others working on projects that they love and are so passionate about, whilst supporting one another whole-heartedly. It was very inspiring.

What is the most important thing you'd say you learned from attending?
This is a tough one. SAE was such a great training ground for me in terms of getting me ready to walk on to a professional film set and know exactly what to do, what is expected of me and technically how a film production runs, but I would say the most important thing I learned, or developed from attending SAE, was discipline. Of course the discipline of meeting deadlines, showing up on time, and knowing the standard of professionalism is important, however, the discipline it takes for us to be in this industry and continue working on our craft no matter how hard it may be or how many times we get pushed back, was the most important thing I’d taken away from my studies. It is a very hard industry to work for a career in and it can also be very objective, so discipline to really put in the work, continue with it and know who you are as an artist as well as the kind of influence you want to have as a storyteller in this industry, was what I got out of studying at SAE the most.


You have mentioned you never thought the film would get into any festivals. What was your reaction when it started getting picked up?
Yes, well when I first started my studies, I always thought that I would be doing this for years before any festival would consider any of our films, so when the notifications of acceptance kept coming in for festivals not just here in Australia, but in countries all over the world, we all were thrilled. I was just so happy that other people were really resonating with the story and were touched with how we portrayed it through film. We had a phenomenal group of people working on the project and I am just so very proud of the work we all did to make 'Next Train From Castlemaine' the best it can be. It was hard work, but very humbling.

As a director what it does it mean to you for the film to be recognised in this way?
It really does mean a lot to me. This story is very close to both me and Heidi’s hearts personally but in our own way. So, to be able to bring this particular story to life and then do it justice was very important but also humbling for us. I think it’s important for us all to have a voice and have the right to be heard, so for us to be able to give people who resonate well with the character of Ronan, the ones that don’t necessarily have the privilege of being heard, a platform to tell their story and say, 'hey, I’m still here. I still have dreams' is such a great honour, and for the film to be recognised the way it has been and resonate with people from all over the world, has been touching. 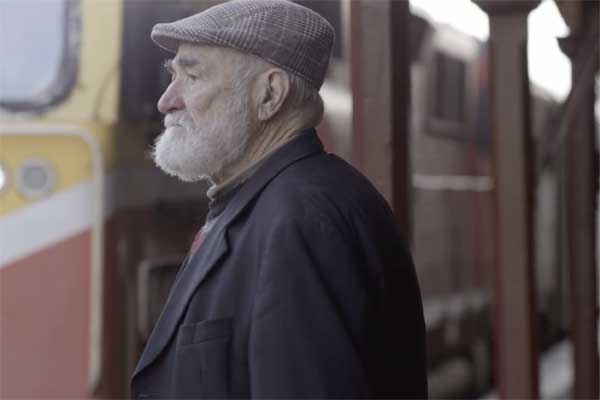 What advice do you have as someone who has attending SAE and now gone on to have your work recognised overseas, for any aspiring directors/filmmakers?
The best advice I could give would be that ‘you get out what you put in’ while you’re there. You have to really knuckle down and put in the work for it to be as rewarding as you hope. Surround yourself with people that support you and will keep you accountable and really put in the effort. Because it is so worth it coming out at the end. Everyone has different journeys and experiences along the way, but from what I have gathered after speaking with other graduates in my time after SAE, they have all agreed with this on some kind of level. It should also be fun! A great piece of advice I received from one of my amazing lecturers and mentors at SAE, was 'you are not your work', meaning you personally, are not defined by the work that you do. You have to do the things that don’t turn out so well, the things that you aren’t necessarily proud of, in order to learn and grow as an artist and storyteller. You have to fail over and over again, learn from the mistakes you make, and grow. Failing is a good thing.

What's next for you in your career?
If you had asked me this question six months ago before COVID-19 decided to make an appearance, I would have had more of a definitive answer for you, but for right now I think I would really like to focus on building up my experience on more professional A-grade productions. The Australian film industry is starting to flourish a little more with many great US productions and networks choosing to film here which provides so much more work for Aussie cast and crew, so I think for the near future until things open right back up again, I’m going to work on gaining experience with the best of the best and use that knowledge I learn to go off a little further down the track to create some more heartfelt stories. My goal is to really create a platform for those people that don’t necessarily have a voice, to be heard, so I will be working towards that in the next couple of years.

'Next Train From Castlemaine' is available to watch online now.