The 31st Flickerfest International Short Film Festival is just moments away from kicking off its 2022 event.


Held at Bondi Beach, Flickerfest will showcase world premieres, Australian talent, and herald a new generation of filmmakers. It will also feature competitive and non-competitive showcases, and is Australia's only Academy and BAFTA qualifying short film festival.

Before heading along to Flickerfest, why not get to know a little more about a few of the people involved?

Frazer Bull-Clark will present his work 'Set Times' at the festival, as part of the Best Of Australian Shorts programme.

Kat gets an unexpected call from her ex, saying he's coming to her band's gig that night. With this on her mind, she sets out for the evening ahead.

Find out more about 'Set Times' and Frazer's involvement in Flickerfest below. 
As Writer/Director, what was your vision for the film?
The original idea came from wanting to make a film that followed a musician in Sydney over the course of one night, from when the sun goes down to when the sun comes up the next day, and the tensions they had in the lead up to their performance. As the idea developed, the lead character of Kat emerged, and I became interested in exploring her relationships and friendships and how they change over the course of the night. In making the film, it was important to me that it take place in a lived-in world. I cast Freyja Benjamin as Kat, who, as well as being a great actor, is also a musician and actually plays live in the film with her band. I liked the approach of combining elements of documentary with a fictional story.

What was the biggest challenge in bringing it all to life?
For a short film, there are a lot of locations and speaking parts, so the logistics of putting the shoot together and running things on a low budget were challenging at times. Thankfully I had a really talented and dedicated cast and crew, and the work Jessica Murphy (Producer), Carina Burke (Cinematographer) and I put into pre-production helped to keep the wheels turning. Due to the documentary approach we took to some of the shooting days, it meant there was a lot of footage (approximately nine hours of rushes), so the editor James Thomas and I also had a big challenge on our hands when it came to refining it down to the final 13 minutes you see on screen.

What does it mean for this work to be featured in Flickerfest?
It’s an honour to be included in the programme! After such a difficult couple of years for film festivals in Australia I’m thrilled that an audience will be able to actually sit together and experience the film on a big screen. 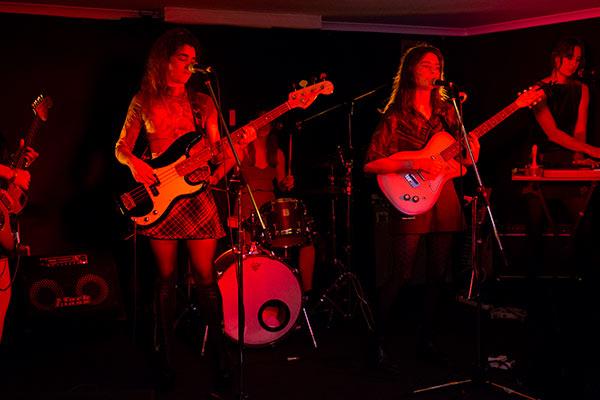 
Is this the first time you’ve been involved with Flickerfest? What do you think makes it a stand-out festival for short film?
This is the first time I’ve had a film screened at the festival. Short films are such a vital way for filmmakers to explore and develop ideas, and can be an art form in themselves. To have a festival like Flickerfest that really showcases and celebrates that is fantastic.

What are you hoping audiences take away from 'Set Times'?
I hope audiences enjoy the experience of being dropped into a world, which may be familiar or unfamiliar to them. 'Set Times' is very much a Sydney story, so I’m really excited to see what a local audience makes of it.

'Set Times' plays as part of the Best Of Australian Shorts on 23 January, during Flickerfest (21-30 January at Bondi Beach).
Tweet
« Flickerfest 2022 – Heralding A New Generation Of Filmmakers Flickerfest Filmmaker Q&A – Megan Smart, 'Stonefish' »
back to top