Set in Sydney and Blue Mountains it gave a subtle, fresh, local spin on the blockbusters we’ve seen from Hollywood.

'Rainfall' was chock-full of fight and battle scenes. Each was incredibly varied: from being surrounded by alien soldiers in a confined space to a giant, alien, backflipping, spider thing, interrupting your campfire stories and bedtime baked beans. Action sequences did not get boring thanks to this variety and had me excited, not knowing how our heroes would make it out.

One of my favourite scenes was a convoy escaping Sydney. With air support they make a mad dash to escape as alien drones and lasers rain down on them. Suspense builds as a drone locks on. The screen flashes full white, a moment of visual overload to hold your breath for just a moment. . . 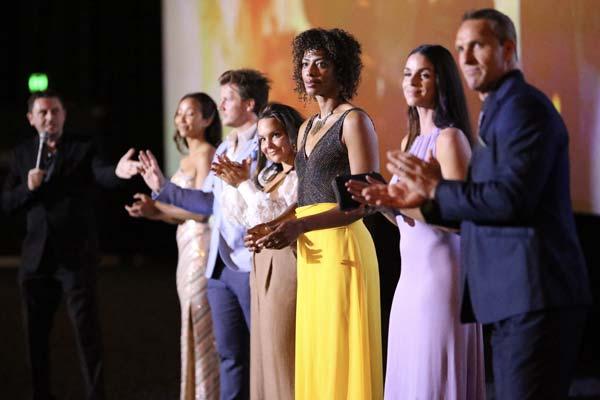 
Script was improved from the first 'Occupation', with characters that you can connect with; Abraham’s love of chocolate macadamias is something I can agree with! I did find the humour with Ken Jeong’s character and partner Steve to be a bit inorganic, feeling forced, but was still a fun time overall.

Our VFX teams have to be applauded for their top-notch work on 'Rainfall'. No doubt the Director, Luke Sparke, gave them a few headaches when they discovered almost every shot was to be made into a CG masterpiece. And that it was, with the stunning vistas sucking you into the world. 
Amelia (played by Jet Tranter) was a standout character for me. She helps the audience sympathise and achieve understanding of conflicts in the story creating a deeper connection for the viewer. I commend Jet’s performance for carrying such an important role and showing the true courage and kindness in Amelia.

'Occupation: Rainfall' really was a treat. An action-packed, heartfelt adventure. It had me entertained the entire way. With beautiful visuals and exciting battles, I urge everyone to go out, support local cinema and enjoy it for yourself.

'Occupation: Rainfall' is in cinemas 28 January.
Tweet
« 'The Witch Of Kings Cross': A Movie About Australia's Very Own Occult Artist – Rosaleen Norton 'The Drew Barrymore Show' Arrives On Foxtel Next Week »
back to top