A national audience of nearly two million people tuned into the return of 'Big Brother' on Monday night (8 June).


Then, if that wasn't enough of a fix, we got two more episodes both days following! It's a lot to take in, and so much has already gone down, so. . . Why not summarise it with some pretty pictures and words?

If you didn't watch, here's what you missed. If you did watch, have fun recapping with us.

The first contestant welcomed by host Sonia Kruger and ushered into the 2020 ‘Big Brother’ house is videographer Kieran. He’s given a secret mission: to high-five and give a nickname, a massage and a secret handshake to each housemate that enters. Success means entry to the bedroom. . . So they can sleep, duh. Get your mind out of the gutter.

We meet the likes of the adorable waiter Ian, the self-assured corporate salesman Allan, the fierce and fabulous make-up artist and ‘80s aerobics icon Marissa, and the firecracker events manager Angela. It’s a diverse range of folks, which is great to see.

Kieran’s mission is successfully completed which means this first batch of housemates can enter their bedroom. Hoorah.

Angela and Big Brother have an awkward, passive-aggressive domestic over whose house she's in. Oh, and she really wants tea. Like, really badly. Seriously. . . Get this woman a cup of tea. 
It’s time for the first challenge of the show. The housemates, secured on swings, need to gain enough momentum swinging back and forth in order to drop five balls on top of five platforms in front of them without the balls falling off. It’s all very intense.

The first to get all five balls on the shelf wins. That’s enough of the word ‘balls’. SORRY.

Construction worker Talia wins, which means she gets to pick the three housemates up for potential eviction. She ends up deciding on Kieran, dance teacher Laura, and woodwork teacher Zoe. What do you have against teachers, Talia?! 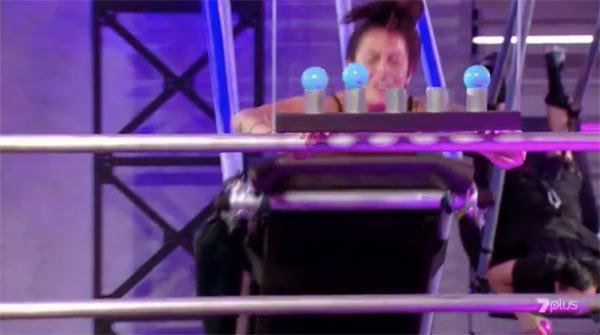 
Kieran is completely shook (even though he tries to tell everyone he isn’t) and running around like a headless chook (rhyme!) trying to make sure he isn't evicted and, in the process, convinces everyone to send home one of the others instead.

Later, The Great And Powerful Sonia appears on a TV screen to invite the housemates one by one to vote. Pay no attention to the woman behind the curtain.

In the end, Laura heads home. She receives six votes of the eleven. Good one Kieran. Just kidding.

Suddenly we’re in the middle of a creepy, intruder-alert horror film, except the four new inhabitants of the house sneaking around in the dark (tradie/model Chad, recruitment director Garth, regimental sergeant major Sarah and former gymnast Sophie) aren’t intruders, they’re just four new housemates. They have to find the second bedroom in the darkness in order to win the whole house a delicious Sunday roast. Yuuuuuum.

The second bedroom isn’t found without a bit of awkward fondling of the currently sleeping housemates. Oops. Sorry guys. Wrong room. Ha. Luckily no one catches them, but Allan and Marissa come close. Wonder if they would have hit them over the head or unleashed some previously hidden karate powers as a result of adrenaline? We’ll never know.

Having made it past literally one eviction, Allan is on top of the world and believes he’s a shoo-in for not only today’s challenge but the entire competition. Naturally, to the other housemates, this isn’t received brilliantly. “I haven't actually met anyone else, I'm pretty sure I'm the only one here.” – Allan, probably


The housemates wake up the next day to find it’s been fake-snowing. They all run outside with glee.

Anyway, the nomination challenge of the day involves each housemate retrieving a flag from the centre of a block of ice: a chance for some real creativity if there ever was one. Ex-AFL player Daniel strips down to his undies and tries to pee on it but gets stage fright (happens to the best of us Danny boy), recruitment director Garth tries dressing up and hugging his block of ice, and a few of the girls even try and use their heels to dig through theirs. 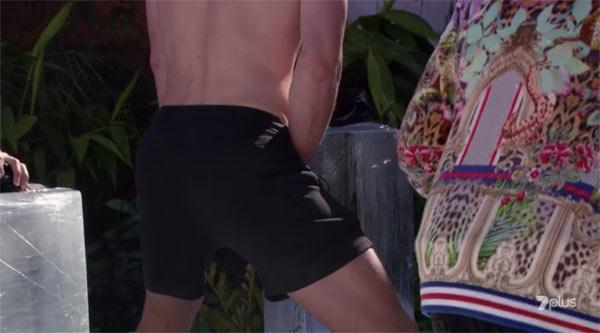 Why was everyone watching to see if Daniel peed? Bunch of creeps. Leave him be!

Kieran is given a heartfelt one-on-one by Big Brother and proceeds to apologise to everyone for his game-playing ways from the last eviction. Allan doesn’t care about trying to avoid eviction, because he’s going to win the show, and Angela is assured by Garth that she’s pretty much safe.

Garth’s crystal ball proves correct, and in a shock twist that absolutely no one saw coming, Allan is blindsided and voted to be evicted by 12 out of the 14 voting housemates.

It’s another day in the ‘Big Brother’ house. The sun is shining, the birds are chirping, and four new housemates arrive via the sky. You know, the usual.

They’re suspended in a cage in mid-air by a crane: call centre service officer Danni, communications specialist Hannah, marriage celebrant Shane and delivery driver SooBong. Big Brother tells the existing housemates they will win $50 towards groceries for each hour the four newbies are kept in the cage.

Daniel is positively mortified that there are more people entering the house, particularly unimpressed with SooBong because he’s, like, strong, and does chin-ups, or something. This would be so much more entertaining if the cage was headed for the pool, and the pool contained sharks. SEND IN THE SHARKS!


Sarah recognises Hannah as a snobby person from her group audition so the editors go wild making sure we know there’s tension. Talia doesn’t seem to be vibing with her either.

Apparently Talia and Daniel are now the king and queen of the house. Not sure when that happened.

Three hours and $150 later, the cage is opened, and Garth and Zoe are chosen to do the shopping for the house.

They order tea and we get to watch Angela crying with happiness and drinking it for quite literally a full minute and a half while ’Nessun Dorma’ plays. Extra much?

Today’s nomination challenge sees the housemates split into pairs. They need to hold and support each other (awwww) on three narrow posts, each one smaller than the next. Last pair standing get to join forces in nominating three people. Sarah and Talia win, so it’s pretty obvious that they decide to nominate Hannah. They also choose Marissa and SooBong. “If you don't stop asking for sweets you won't get any dinner.” – Marissa to Sarah, probably


Marissa goes into headless chook Kieran mode and doesn’t hide the fact that she’s pretty annoyed about being nominated. Emotional and overwhelmed literal angel on earth Sarah tries to calm her down, with Talia entering and making sure everyone’s all good. Everyone’s all good.

Just before each person picks who they want to send home, SooBong decides it’s a great time to confidently position himself as a threat for everyone in the house.

That’s what you missed on the first three episodes of ‘Big Brother’! It airs Sunday, Monday and Tuesday nights on Seven.