And then there were ten straight, white people.

It’s actually kind of sweet and we see a side of him that we haven’t until now. Good old BB arranges to have her video call Dan in the living room. He asks if she still loves him and she says ‘absolutely not you hideous, big-nosed monster’.

She does call him out for talking about their relationship on national television, which will do, I suppose.

Kieran suggests they have some alone time, but it’s only just ticked over 7:30pm and I’m pretty sure there’s no ‘Big Brother Up Late’ this season so this better not be inappropriate. Keep it PG please, you two. Luckily he just cries and tells her he has really scary dreams about her following 40 guys on Instagram. That’s almost as romantic as Chad’s Sophie/clown hybrid nightmare.

Meanwhile, Hannah’s communicating through the medium of botched, spliced audio clips that it’s time for her to lift her game and target Mat, Dan and Xavier. She’s conspiring with Marissa and it looks like the confetti from the balloons in the last episode is still all over the floor. How do you live like this, you bunch of pigs!? Where's Garth dressed as a butler when you need him?


This week’s shopping task has the housemates completing Big Brother's demands, and if they all complete them in an accumulated time of 20 minutes, they’ll get $250 to spend on food. If not, they’ll have to live off basic rations for the week.

Seriously. Please fail this challenge. I need some high tension and low hunger up in here.

Kieran has to eat five chillies. He does it. There’s also a whiteboard and some markers next to them but we never find out what that’s doing there. Love a bit of mystery.

Mat and Sarah need to put a piece of thread through a needle while wearing muscle stimulators, and I have to say that what follows is genuinely hilarious and low-key a little dangerous. . . Which is exactly the combination I’m into. Danger and hilarity equals quality. It’s the law.

Kieran’s losing his mind over the chillies in the bathroom while Sophie watches and her reaction is a big mood. “I’m a celebrity, get me out of here.” – Sophie, probably


Marissa and Xavier need to wrap presents wearing oven mits. I won’t make any further comment on this as a result of how traumatic that concept is.

Chad’s task is to eat Weet-Bix without milk. I can’t believe I’m admitting this in a ‘Big Brother’ recap but I used to do this as a kid, by choice. Simple, Chad.

Casey and Dan need to blow up balloons until they pop, which is pretty torturous in itself.

During all of this, Kieran is still unable to cope with the chilli intake.

“I’m going to sh.t like a train tomorrow,” he says. Hmm. I don’t remember that episode of ‘Thomas The Tank Engine’.

‘Big Brother’ gets his passive aggressive on by giving Hannah and Sophie the task of sweeping up confetti in the diary room, clearly a jab at the leftover confetti from the balloon challenge. I see you, BB. He doubles up by firing it pretty much right at them. This was too good not to screenshot. Never a greater moment was captured.


Please fail please fail please fa– DAMN IT! They pass the challenge and even get a Mexican fiesta, sombreros included. So not only do we now have to watch them continuing to enjoy themselves instead of being tortured, but we also have to endure a bit of cultural appropriation on a Tuesday night? I’m starting to think the real ‘Big Brother’ challenge is watching the show itself. Where are the high stakes for these people? Set the kitchen on fire or delete the ladder of the pool or something, I don’t know.

Anyway, it’s the next day and Kieran puts his trust in Dan (stupid idea) and lets him know he wants Casey out.

To approximately no one’s surprise he goes straight to Casey and lets her know. He puts his trust in her not to make a big deal out of it.

She returns to Kieran and makes a big deal out of it. I have whiplash. Literally what is going on. Everyone is just backstabbing everyone at this point.

Enough of that fun. It’s nomination challenge time and this one is probably the simplest to explain thus far: they need to get in pairs and successfully create a line of dominos that can topple and hit a buzzer at the end of their path.

It doesn’t take a genius to figure out that this is pretty gruelling viewing, with so much to take into consideration like steady hands, space between the dominos, and just patience in general. Dan and Xavier win, but this time around they can only nominate two housemates for eviction, instead of the usual three.

They nominate Hannah and Sophie. Chad heads to the diary room and reveals that if Sophie were to leave he’d crack. Sophie says she’s about to projectile vomit. I want to see cracking and I want to see vomiting.

Sadly neither occur because Hannah is evicted with five of the six available votes. Bye girl. 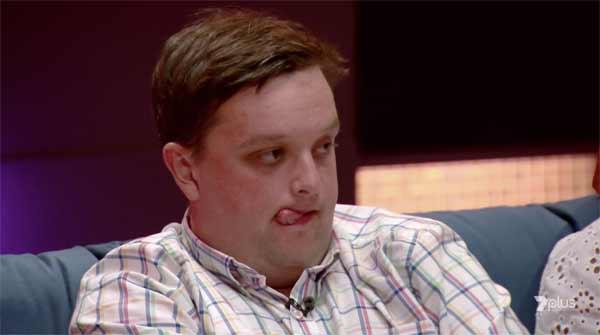 Tweet
« Check Out My Butt, Uh Huh Huh Huh Huh: Beavis and Butt-Head To Be Rebooted Big Brother 2020: Recap Of Episode Thirteen »
back to top