Things are already off to a weird start as the housemates begin to realise cameras are disappearing.
The crew have gone home because all the interesting players are gone and they realised that the way the show is structured means that people with the least personality will be the only ones left.

What? Who said that? Just kidding. One of the crew members came into contact with a positive COVID-19 case and is off being tested, so only essential crew are left. The housemates have already been told about the pandemic which, as morbid as it sounds, kind of sucks because that calibre of drama makes for pretty excellent television. They are told about how much more severe the situation has become, and are allowed a call to a loved one. In the meantime, the game is suspended until the results of the crew member come back.

Sarah is the most shaken when she finds out it’s bigger than chicken-pox. Understandable.

What follows is some pretty sweet phone calls to home. Sarah gets to talk to her boyfriend, and she’s pissed off with him because he’s playing Monopoly without her. Well off you go then Sarah, go and win 250 grand in Monopoly money instead. Sheesh.

Sophie’s family is in Europe and things aren’t great over there at this stage. Luckily Chad’s there to take his shirt off and distract her. Hang on, sorry. What’s going on right now?

Marissa is mindblown about how “they can do technology really quickly” but not find a cure. So true Marissa. Well-put.

Kieran’s mum tells him not to piss people off too much. You’re about 13 episodes late with that advice, Kieran’s mum.

Then we get another interaction between Dan and the famous Ana. This is cute to begin with but then he starts talking about how he wants to marry her and hold her and have her all to himself and I can’t help but feel like I’m intruding on something I shouldn’t be. I’ll just be going now, sorry, you two talk amongst yourselves.

The COVID test has come back negative so the game can continue. But the editors don’t let us know without some dramatic build-up music and glances from the housemates first, which is a little extra if you ask me. Anyway.

With the game back on, strategising is in full swing again. Xavier plots with Dan and Kieran to kick Chad out.

First things first, there’s a challenge to complete. The prize is a game advantage. The challenge is for them to find a ‘Big Brother’ logo eye hidden somewhere in the house. Hilarity ensues as they all start turning everything upside down and looking underneath things. 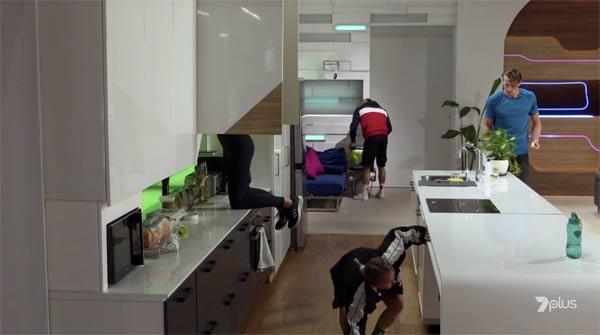 
Sarah finds the eye inside the green room and is so composed and chilled about it, it’s ridiculous. She thanks her height, or lack thereof, for the win. . . Even though the location of the eye could have been pretty easily found by anyone of any height.

The game advantage is that she gets to remove one person (including herself if she’s up) from the three nominated housemates. Crafty.

She decides to withhold the details of her advantage, but then proceeds to hang out with everyone in the kitchen as they probe her. Girl, just walk away. This is a house full of players, someone is bound to get it out of you soon. She decided to only tell the people she can confide in and trust, which, let’s face it, is actually no one.

The nomination challenge is literally just musical chairs. Okay, last week was dominos, this week is musical chairs. . . They’re getting simpler as we go on. Did Big Brother’s creativity get coronavirus? I kind of miss thinking of the correct way to describe the ridiculous tasks these morons needed to undertake. Are we going to watch them play pin the tail on the donkey in episode 14?

There’s lots of running and jumping and chaos, and an all-too-relatable shot of Marissa sinking floor-deep into a deck chair. We’ve all been there. 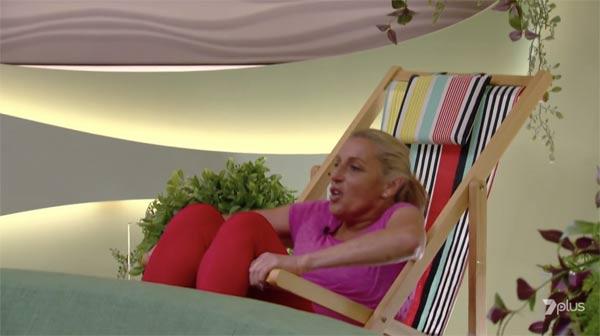 
It comes down to Dan and Chad. Dan says he’ll make it look like an effort so that Chad can win easily, and for a second it almost feels like he’s set Chad up to lose. But he follows through and Chad wins. He celebrates the win even though it only happened because Dan let it. Look, any win’s a good win Chad, well done. Maybe win it for yourself next time, geez. Joking.

Chad nominates Sarah, Xavier and Casey. Sarah, obviously, removes herself from the firing line. . . Leaving it between Xavier and Casey. They’re both so chilled and docile that their plea for being saved is “do what you wanna do”. LOL

Xavier even goes for a swim before even bothering to scramble for votes. Meanwhile, Dan and Mat are roasting Casey for being terrible at challenges and then they tell her to have a shower. JERRY! JERRY! JERRY!

It’s eviction time and Casey’s getting all emotional about how much Xavier means to her. I start realising she reminds me of Kasey Chambers and laugh. I laugh even more when I realise they have the same name. Conspiracy confirmed. Casey! Sing ‘Am I Not Pretty Enough’!!

Sonia says, and I quote, “one of you is going to end tonight” which is a bit grim. Better choice of wording next time please, lady! You’re Sonia Kruger, not Freddy Krueger. Imagine that. ‘Big Brother’ hosted by Freddy Krueger. That'd be a bit of a laugh, wouldn't it. Chad would be having nightmares about Sophie wearing stripey jumpers and bladed gloves. Sorry, I’m getting off track.

Every vote goes to Xavier and, gosh would you look at that, just like Sonia predicted, he disintegrates into thin air. Okay he doesn’t he just walks out with his suitcase. AND THEN HE DISINTEGRATES INTO THIN AIR.

No he doesn't he is driven away in a car.