We start the episode off exactly where we left off – Casey’s been kicked out, pretty much singlehandedly by Sophie.

Sonia’s telling us about an ‘unspoken tension’ and basically just about how sh.t’s getting real. Sophie’s worried that she won’t make it to the top three if Dan and Mat are there, but Chad reassures her he can trust them. So wait, what are you doing here then Chad? If you can trust them to keep Sophie around, that means the top three with be Dan, Mat and Sophie. What are you waiting for? Pack your bags.

“I can’t tell if Chad is fully understanding what I’m telling him,” Sophie says. Ya think?

Kieran’s become the Dalai Lama after surviving six nominations and is imparting his nuggets of wisdom to the other housemates, considering that apparently means he knows all. He thinks that idiots don’t make it this far in ‘Big Brother’. He is wrong. He is an idiot. At this point literally no one in the house wants him there.

Da Boyz (Dan and Mat, that’s their new nickname now I don’t make the rules) are plotting to get rid of one or both of Sophie and Chad, since they practically make all the same decisions in the house.

Big Brother randomly invites Chad to the diary room for a beer. Chad teaches him how to talk like him, which includes pronouncing “th” as “v”. Big Brother says, in his fancy voice, “hello housemates, this is Big Bruvva” and everyone can go home now because that moment wins the whole show.

Meanwhile, Mat is trying to convince Kieran to vote for Chad and/or Sophie. I’m super glad the subtitles are on for one particularly stirring comment from Kieran 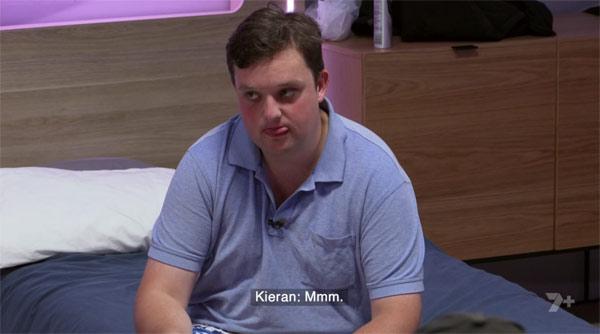 
What follows is a delightful and not at all infuriating supercut of Kieran just generally contributing nothing to the house whatsoever. Chad’s having a rant about how Kieran spills “coffee beans” all over the counter and we get a close-up of instant coffee which is not coffee beans.

Today’s house task is essentially the housemates standing in a glass box while a bunch of confetti flies around them and they try to catch either a pink or blue slip. . . Blindfolded. The pink slip gives them a reward, while the blue slip is an opportunity for them to punish another housemate.

It’s not hard to predict that pretty much everyone chooses to punish Kieran. He’s made to do the dishes by Sarah, pack up his suitcase by Mat, and he’s given a disadvantage at the next nomination challenge by Chad. That last one is dumb, because Kieran hasn’t won a single challenge. Hell, he hasn’t even come close. Why would you not give that disadvantage to a challenge beast? Idiots, the lot of you.

Dan is punished and made to stand at the door for the remainder of the challenge.

Some of the rewards include KFC, pizza and lollies.

Big Brother also gives them a football to kick around in the backyard. This hurts Dan’s heart. But not as much as when Sophie kicks the ball over the fence. That is the second time in this season that has happened. Poor Danny boy.

Anyway, this was fun. Whatever. Moving right along.

The nomination challenge basically sees them balancing a ball on a platform that they’re holding up. Wait, if they’re holding these platforms up with their hands, how do they get the ball on their platforms?! Mysterious hands wearing black gloves, that’s how. Mum, I’m scared. Where did these body-less hands come from?! Is it Sonja in another bizarre outfit? 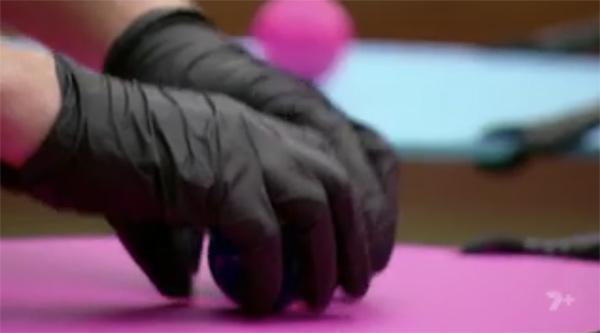 
Kieran has two balls instead of one, as per his ‘disadvantage’ from the house challenge. Is everyone happy that the weakest person at challenges who is always the first one out, is the first one out again? You really made a strategic move giving him the disadvantage, Chad! What do you see in him Sophie, seriously.

Dan and Chad are left. Dan’s composure is pretty convincing, looks like this one’s his.

Until it’s not because Chad takes out the win. Luckily he actually puts a bit of thought into his nomination choices. He puts up Mat and Kieran. EXCELLENT. Kieran is absolutely not a threat because let’s face it, if he makes it to the end, surely no one will vote for him to win. Hoorah! And everyone in the house knows what they’re doing so they’ll definitely make sure to vote out Mat. He’s the biggest competition.

(Narrator: “They did not vote out Mat.”)

Kieran is evicted, getting all the votes, and are you kidding me, what the hell just happened, help.

In another Angela-esque moment, Kieran’s instead whisked into the ‘White Room’. Oh boy! I hope the only way he can get let back into the house is if he can manage to keep the room clean! We all know that’s not going to happen!