Okay, I’m just going to preface this by saying literally this entire episode is a waste of everyone’s time. Seriously. Not much happens at all.

We are 17 episodes into this show which surely means I should be more and more into it as it goes on. Sadly that’s not the case here. Anyway, hello. How are you. I’m recapping all the ‘Big Brother’ episodes which is why you’re here. Let’s go.

Kieran’s in the white room which means he gets a second shot at being in the house. If he wants out, he can press the red button, but he’ll go home. He’s walking around licking his lips as usual. Big Brother cracks a funny and says “everything is going to be ‘all white’”. This is no time for comedy.

We’ve seen a cringeworthy clip of Kieran singing about 43 times since the last episode and I just want them to air it so it’s over already.

All the furniture in the house is gone. Sarah’s already over it.

So now the housemates are asked individually to the diary room for a line of questioning from Big Brother. What is the point of this. He’s trying to blame everyone and this apparently gives them all a chance to make some cute funny digs at each other. Okay, cool. Can we get to the point of why the furniture is gone?

Never mind. We’re back to Kieran pacing the white room. Something I forgot to mention is that there are two beds and two red buttons, so I guess the next person to be evicted will join Kieran. Lucky them! An experience we can all only dream of.

And now, more riveting footage of the housemates sitting on the floor of the main house, while Big Brother questions them one by one. I’m genuinely confused by this entire thing. Does anyone know what’s going on?

Fifteen minutes in and I’m wondering what’s on the other channels right now. Oh my gosh something’s happening now they’re outside lying down.

Thankfully Big Brother offers to returns some things to Dan. Some kitchen appliances, pots and pans. Also the fish in the fish tank. But Dan can only take one for the household. Is this meant to be a hard decision? Sorry fish, but why on earth would Dan pick you over basic kitchen things to make food with?

Dan ‘discusses’ the situation with Henry, the fish. It’s official, they’ve all gone insane. By the way, there are two other fish in the tank and I’m calling Dan out for the fact he ignored them. How rude. Next evictee, please. The two other fish are flat-out shunned by Dan.


Big Brother invites Sophie to the diary room for some KFC. He says “winner, winner” and Sophie replies “chicken dinner” which is literally Red Rooster’s slogan so this is awkward.

Big Brother tells them he took all the furniture because he wanted to see which housemate was most deserving of winning the show, or something. I’m still very lost. So is the furniture.

It’s nomination challenge time and it feels like this episode has been going for hours.

They have to unlock three boxes with one of 30 keys. Each box contains puzzle pieces and at the other end of the room is a blank platform for them to solve the puzzle on. Oh, and during all this, they’ll be attached to a bag that contains 70 per cent of each of their body weight. It’s not actually their flesh though it’s just, I dunno, bricks or something. So that makes it a little less exciting.

Also Sophie makes sure everyone’s feeling suitably threatened by her prowess in a fierce seven-word sentence: “I don’t know how to do puzzles!”

And they’re off. Dan gets a pretty good start and so does Sophie, which is too bad because she doesn’t know how to do puzzles so like why is she even bothering to be honest.

The puzzle is of each of their faces which is cute.

Dan wins the challenge. He nominates Sarah and Sophie and I’m starting to believe the top three of this show is definitely going to be a boy’s club. Wahoo can’t wait.

The furniture is still gone and there’s no mention of it returning.

Sophie’s pretty convinced the ‘top four pact’ that her, Mat, Dan and Chad have discussed means she might be safe. But she’s not so sure about Mat and she’s sh.tting bricks to Chad about it. Yes, hello Sophie. If only you referred to my previous recap where I said Mat should have gone home and not Kieran. Because Kieran is a nothing. And Mat is a threat. Hello?! Is anyone listening to my insight and wisdom? Good grief.

In the eviction room, Sonia basically forces Sarah to talk about why her winning would mean a lot to her and the tears start and the precious angel is put on the spot.

Only Mat and Chad are voting. It turns out that Sarah and Sophie receive a vote each, so Dan gets to make the final decision. He votes out Sophie.

Luckily, Sophie is a queen and even makes eviction look fierce, seriously if I’m ever on ‘Big Brother’ I just want to get evicted so I can serve a look in the exit corridor. The lighting is very high fashion photoshoot. 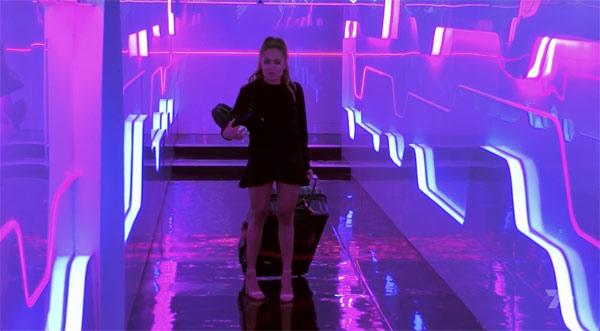 
Anyway, surprise surprise she isn’t actually evicted and Big Brother tells her to head to the white room. Look at the poor thing, not realising she’s about to walk into a room and share four walls with Kieran. Sophie. Turn back now. While you can. Just go home. You’re allowed to. You’ve been evicted. Literally just go.

Oh man. She walks in and sees him.

I say “sees”. . . She actually turns around and jumps at the sight of him standing behind the door. That moment in itself warrants another screenshot. You’re welcome. 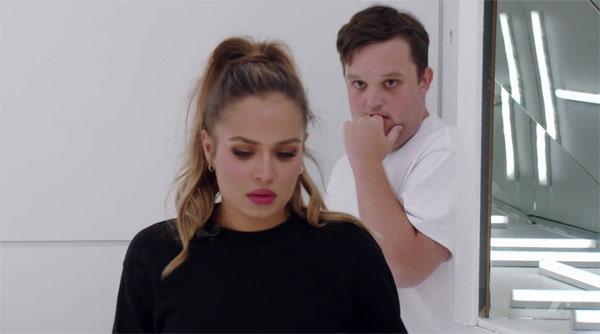