Click here to catch up on our previous recaps.

It’s Angela’s world, and we’re just living in it.

How the rest of the housemates can’t hear her cackling from her secret bunker is beyond me – considering she spends 90 per cent of her screen time in this episode laughing.

And sure, there’s a shock twist that she’s going to be watching the housemates’ every move and having a say in what they do, but was no one else startled when Big Brother declared Angela his little sister? Not even Angela was, and this is a pretty big revelation. Are there any other siblings in the house? Who are the parents? Is Sonja Big Brother’s cousin or something? Wait. . . What show is this?

Oookay, so, Angela’s title of little sister is just a fun little nickname she’s given by her captor to make her feel less like she’s trapped in a 3x3 box with an ordinary looking bed and no cooking appliances. Cuuuuuuuute.

Angela will be free to return to the house after a few days of, uh, fun, which begins with her perplexed facial expression as she watches pure soul Ian play the spoons. 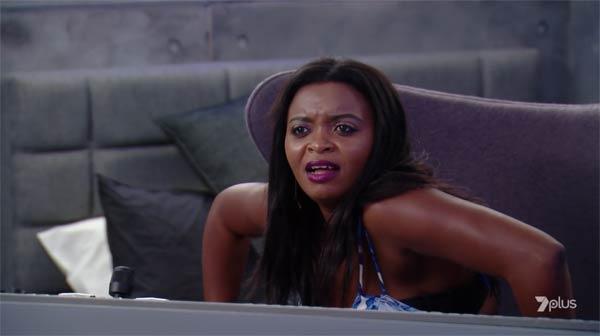 "Spoons are made to stir tea, not slap against your leg! Mmm, tea." – Angela, probably


Today’s house task involves the word “yes”, said a lot. The housemates must accept and carry out every request Big Brother makes. So not only is he holding a woman hostage, he’s also forcing the other inmates – I mean, housemates – to partake in slave labour, and bribing them with KFC.

“This is going to be the best day EVER,” Dan incorrectly predicts.

He’s first up, and he has to do the unthinkable. . . Kick a football over the fence.

The ex-AFL player accepts the harrowing task, watching it fly away into the distance. Quite a beautiful metaphor for his failed football career. Someone get me a tissue.

Kieran needs to eat a bowl full of broccoli and we get some lovely ASMR, open-mouth, chewing sound effects.

Mat’s next, and he says yes to getting a questionably dark spray-tan. Somehow, between sitting on the couch and walking into the diary room, he manages to change his outfit. Continuity matters, Big Brother. What’s going on here? Mat has mastered the art of quick change. Next stop, 'Australia's Got Talent'?


Anyway, Mat reveals he’s always wanted a spray tan but was too scared because he’d, quote, “cop a bit of curry” for it, assumably this is some kind of Australian outback slang for ‘receive some criticism’.

His tan would have been a lot funnier if it was a more striking shade of orange, but hey, that’s fine.

Garth plays butler for the household, Ian has to converse in song, and Marissa is made to wear an inflatable costume resembling cattle. Geez, BB, just call her a cow and be done with it.

At the end of the day, the housemates get their KFC. Oh! Angela gets a serving too. Was it slid under the door or something? Also where does she go to the bathroom? Sorry. Got sidetracked.

Meanwhile, Kieran’s being called out for being a biiiiit of a slob, and he heads out to the yard to sit with a group of housemates who are, to put it eloquently, talking sh.t about him. Awkward.

The nomination challenge this episode is another bizarre doozy. They’re all paired up and have to stack ten cylinders on a shelf suspended and controlled by ropes that raise and lower based on the pairs walking back and forth on velcro. Again. . . Who has the imagination for these challenges? Can we simplify things a bit? It’s getting a little hard to describe this stuff through the medium of written words. Here’s a visual representation of the chaos that was this stupid challenge.


I don’t want to talk about this anxiety-inducing disaster. Here’s your recap: they walk back and forth, cylinders fall off, intense eye contact is made, and eventually, Zoe and Sarah win. Yeah yeah, I know, that was a pretty basic overview but I’m breaking out in a sweat just writing this. Go endure it yourself if you want more depth. Sheesh.

Zoe and Sarah head to the diary room to nominate. Sarah gives her incredibly logical two cents: that Garth, Xavier and Casey are flying under the radar which essentially makes them the biggest threats, because they could make it all the way to the end without anyone even noticing! Ever the negotiator, Zoe takes none of that on board, and just picks three others based on her own personal opinion: Kieran, Marissa and Ian.

Well, if one thing is certain based on Zoe’s logic, it’s that our precious angel Ian is definitely safe. . .

. . .Is what I would say if Angela didn’t invite Garth into her bunker to convince him to make everyone vote out our precious angel Ian. Goddammit.

Garth is totally on board and is off to deliver the Word According To Angela around the house, person by person.

In order for everyone to really listen to him and take his argument on board, he’ll have to be clear, reasonable, and perhaps most importantly, completely non-hostile.

“Hannah, stop being a bitch and come here.”

With this new strategy, the game has officially changed – it went from voting out people making direct impacts on the house, to shifting the focus to those who are coasting and silently making it through every week. Gosh, it’s almost like Sarah KNEW EXACTLY WHAT SHE WAS TALKING ABOUT, ZOE!

So with that said, Ian is evicted. For the love of god, if the remaining housemates let his fish die, someone’s going to pay.

It’s also time for Angela to return to the competition. Cue that music from 'The Devil Wears Prada' when Miranda Priestly enters the building. Someone turn the kettle on and remove any remaining traces of green tea. She's coming.