Click here to catch up on our previous recaps.

Lucky us, we’re kicking the episode off with an update regarding Casey’s bowel movements. Things seem to be pretty much on track again, thank god. It’s a timely metaphor for what’s to come, because sh.t is about to well and truly hit the fan.
Angela’s a little anxious after surviving the last eviction by one vote, understandably. She heads to the diary room to spend a bit of quality time with Big Brother. He says he’s glad she’s in his house and they exchange air kisses. Bless.

There’s no mucking around today and it’s straight into the first task. The prize is a night inside the house with a home-cooked meal and drinks, which sounds pretty standard, until you realise the losers have to spend the night out in the yard.

The housemates wear a belt with a giant balloon attached to it, and the aim is to be the last one standing with an inflated balloon. Naturally everyone’s getting out sharp objects and what follows is a tense tip-toe around the living room and bursts of murderous running as they all come after each other.

Sarah calls Xavier a pussy and is targeted. Sophie commits balloon suicide and takes herself out of the challenge. Things are getting crazy. 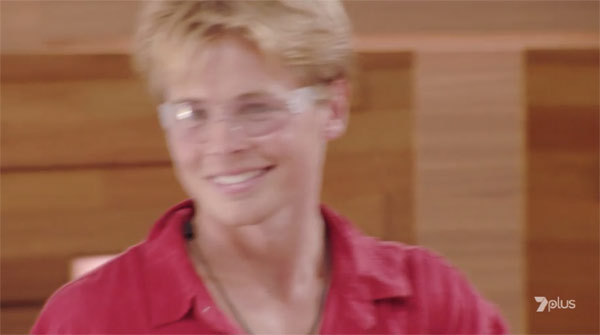 If looks could kill.


Mat’s assigned a secret task: to take out the remaining two competitors in an hour, and if he succeeds he’ll be able to bring someone inside with him for the night. He completes the task. So who’s it going to be, Mat? The smart thing to do would be bring someone in who you can convince to join your side. Rally some more troops to ensure your continued safety in the competition. Really build your trust up with someone you’ve not fully bonded with yet.

He chooses his mate Dan. Okay then.

Meanwhile Angela is pacing nervously around the yard, stressing and sweating about sleeping on astroturf in a fenced yard with a pool. She doesn’t know what a sleeping bag is. She thinks it’s a blanket.

Get a grip woman.

“This is actually so decent, I’m so happy with this!” Kieran says.

“This is ridiculous,” Angela says.

In the words of Britney Spears, there’s only two kinds of people in the world.

Meanwhile, inside, Dan and Mat are chomping away at some delicious looking food and talking strategy, even though they’re obviously both on the same side so it’s kind of pointless.

Sidenote. . . The blatant splicing of voice clips in this episodes is something ridiculous. It’s getting to a point where it just sounds like each housemate was asked to recite the alphabet at the start of the show so that the editors could just whip up crazy sentences from them to cause drama. Are Dan and Mat really after Ange as violently as it sounds like they are?

They’re in the bedroom dressing up in Ange and Marissa’s clothes.

When they come out to show off in front of those sleeping outside, everyone, including Angela, is seen having a good laugh in a group shot, but then it cuts to a close-up of Angela and Marissa looking less than impressed. Seriously, at this point these recaps are as much recaps as they are one of those IMDb ‘goofs’ pages. 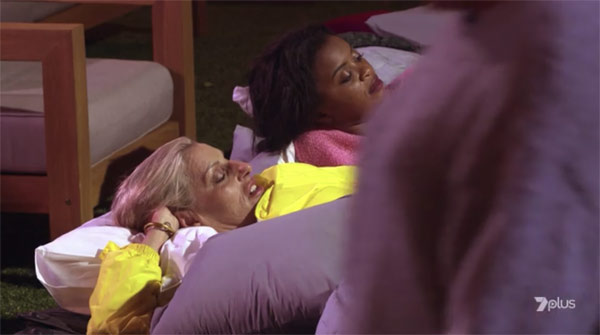 How did Angela and Marissa go from sitting up straight and laughing to lying down looking half alive in .2 seconds? What skill!

The next morning Angela is still going on about being scared of possums and everyone who has shared the yard with her is looking pretty fed up. She might be a good player of the game but she clearly doesn’t know how much she’s irritating everyone.

Mat goes to chat with Sarah, Chad and Sophie about getting Angela out of the competition. Marissa is in the next room and overhears everything. What follows is some of the most blatantly fabricated drama on TV. We all want to believe what’s happening is really happening, but the choppy audio splicing is. . . Too much tonight. I’m getting aural whiplash. Every second word seems to come from a different audio clip!

Housemates must sit and hold up a cylinder with their legs, without letting it fall, for this nomination challenge. Kieran’s out after approximately 15 seconds, getting a front row seat to the action up at the pool deck, and watching over the sweating housemates like a bit of an overlord. “Yes, excellent work my minions. Keep this up and perhaps you will earn my respect.” – Kieran, probably


Sophie gets her first win of the show. She nominates Angela, Kieran and Casey.

Angela’s still trying to get her point across that those quieter than her are much bigger threats – which, if the game is being played a certain way, is completely true. Sadly no one seems to be on board with this.

Later, at the eviction ceremony, Angela accepts her fate as a dead woman walking and decides to call out Casey for doing nothing to get to where she is, which is pretty much also correct. She’s not on board with this opinion and we get a pretty juicy, not spliced together blow-up between the two of them.

The tea queen is voted out. NoOoOoOoOoO!

We’ve gone from representations of people of colour, Asians, and the queer community, to a house full of straight, white, vanilla ice-creams. Woo. The problem with this new format is that the housemates are voting out their biggest competitors, aka, people with personality and perseverance, when it used to be in the public’s hands to vote for people to keep. So it’s almost certain that when it comes time for us to vote for who we want to win, we’ll be choosing between three duds.

Tweet
« First Watch: Jennifer Hudson Is Amazing As The Queen Of Soul Aretha Franklin In New Hollywood Movie 'RESPECT' Check Out My Butt, Uh Huh Huh Huh Huh: Beavis and Butt-Head To Be Rebooted »
back to top