Kieran’s super happy to have a roommate in the white room.

Big Brother cracks his ‘all white’ joke again. Get some new material BB.

The way Sonia announces how Sophie will need to “survive the white room. . . And Kieran!” is spot on. She really makes it sound like a challenge, because, let’s face it. . . It is. Maybe Sophie can collab on Kieran’s self-written white room song we all had the pleasure of enduring in the last episode.

Sophie and Chad are lying awake thinking about each other in their separate beds. This is like ‘Summer Nights’ in ‘Grease’. Those suuuummerrrrrrr…. niiiiiiiiiiiights!

Oh christ now we get a cheesy montage of their time in the house, complete with a soft filter over the top of it. Also, sidenote, Sophie’s hair is wet. I don’t see a shower in the white room. Something’s not adding up here. It feels good to say that out of the context of me trying to figure out a maths equation. It feels great actually.

ALSO, you know what else isn’t adding up? All the furniture is back! And Big Brother is still trying to blame one of the housemates as if they were somehow able to move a bunch of lounges, a dining table, an outdoor setting, kitchen appliances, and the water from the pool, undetected.

Meanwhile, Chad is definitely putting up a positive front so that he can throw someone under the bus, considering Sophie wasn’t supposed to leave. Mat’s feeling threatened by Sarah because she’s the only one left with a personality and a relatable, emotional backstory, so he wants her out.

Sidenote, something I’ve just noticed, they must all get some random person to come in and give them a haircut, right? It’s been more than a month in the house and they all look so well-groomed still. Is Sonia a qualified hairdresser? Queen.

I’m starting to get a little terrified by Sophie. Her demeanor has shifted to a little psychotic and unhinged, which is probably as a result of being surrounded by white, oh, and Kieran. She’s pacing with wide eyes and talking about how this is revenge and how she will take out anyone to get back in. I love this please keep this coming this is already much more entertaining than the entirety of the previous episode which we will not be discussing. SHE’S WRITING ON THE WALL WITH A KNIFE SHE’S WRITING ON THE WALL WITH A KNIFE AHHHHHH does this count as wilful damage is Sophie going to be charged for this?! 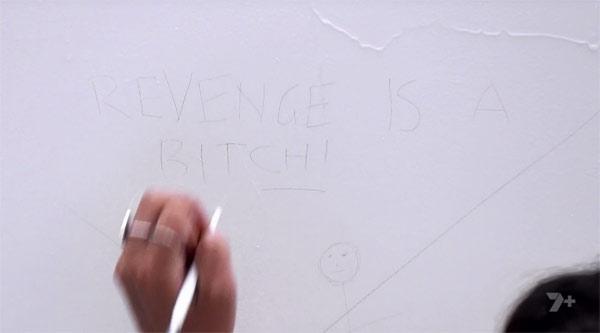 Did anyone else just get chills?


Today’s shopping task will get the housemates some pretty swanky, expensive food. There’s $1,000 worth of things on the list. It also includes a football because the straight men need their play time, and a call home.

All they have to do is stand on a target holding a tennis racquet for an hour each, and wait for a ball to be shot at them at any given time. If they miss a ball, $10 will be taken off.

Part of me feels like this whole segment is some kind of CGI, they're all hitting the balls with far too much force and precision, but, ugh, I’m trying to bury my skepticism. They're all fantastic. Bravo.

They end up getting $490 to spend. Like I just said before I’m not good at math but that definitely means they missed more than half the balls shot at them. I think. Can someone confirm? Sonia?

Oh well, luckily there’s only four people in the house so that’s actually not a bad amount of money.

I feel like it’s only fair to put a screenshot of Chad being hit in the face with a tennis ball here. New addition to the modelling portfolio I reckon.


We’re back to Sophie and Kieran in the white room and Sophie’s continuing to cause destruction to the pristine, white walls. She’s actually gone a little more insane than Kieran, and she’s not even been there as long. Yikes.

Big Brother tells them to pack their things. Cue that gif from ‘The Office’ of Michael Scott shouting “oh my god, okay it’s happening”.

The nomination challenge involves catapults and balls. Housemates must catapult balls into each other’s baskets. If a housemate gets five balls into their basket, they’re out of the challenge. But in this challenge. . . There’s no eviction. The winner will get a different kind of power. The power to kill one of their competitors in any way they desire.

Just kidding. It’s something about controlling the future of the game or something like that I don’t know. Boring.

Things get a bit awkward during this because Big Brother’s going to town letting everyone know Chad is targetting Mat and Dan. Geez, Big Brother, way to ruin Chad’s plans.

Chad is removed from the game, he gets five balls in his basket. One of them is his own. #oops

Sarah’s the next one out, so it’s between Dan and Mat who are at this point kind of like a Chad/Sophie situation. . . They’re both playing the same game.

Mat wins. Big Brother decides he wants to throw the house a soiree.

He makes fun of Sarah because she’s pronouncing it ‘soirez’ for some reason. For once I actually agree with Mat, Sarah get your head in the game this is final four you can’t go around mispronouncing words.

The soirez is crashed when Big Brother shows footage of Sophie and Kieran in the white room. Sh.t’s about to go down and Dan looks SUPER keen! 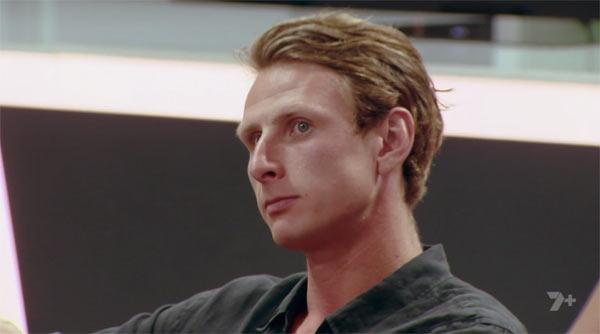 Uh-oh. He need some milk.


So, here’s the situation. An amount of money will appear on the screen in front of Sophie and Kieran. At any point, either of them can press the red button, grab that money, and leave the house. The other person will go back into the house. But, if neither of them hit the button, Mat gets to pick who returns.

This is collectively as intense as the last three or four challenges combined. Sophie decides she’s not taking the money, so it’s all up to Kieran. He stops the clock and scores $15,000, which is taken from the final $100,000 prize money, but he has to leave. That means Sophie gets to go back in and WAIT THIS IS SO EMOTIONAL THIS IS SUCH A 180 FROM THE LAST EPISODE!!!!

Dan and Mat both look like they’ve just seen a ghost because a strong competitor is coming back.

“If Soph comes back and wins, us four get nothing,” Mat says, moping around the house with Dan. Yes sir. That is correct.

Careful boys! This defeatist attitude doesn’t look too flash on you.

Sophie’s back, and she’s dangerous.