Fun with hard drugs – the new misogyny for Wicked Campers

Organisers of Hunter Valley's Wollombi Music Festival have banned all Wicked Camper vehicles from their site for the 2019 event slated for September.


Over the past decade lobbyists and governments have struggled to identify the best course of action in addressing what are widely deemed offensive slogans on the side the company's hire vehicles available from 13 depots around Australia.

The company was seemingy beaten into unwilling submission in 2016 – at least in respect of misogymistic slogans. The Queensland state government threatened deregistration of any vehicles which fell foul of the Advertising Standards Bureau's adverse findings when the bureau itself proved toothless in enforcing its own findings.

Around that time community dissent was also rising with some taking matters – spray cans specifically – into their own hands.

The combination of community action and the threat of taking the campers off the roads appears to be have been toxic to John Webb, the hitherto 'zero-fucks-given-for-a-decade' owner of Wicked Campers prompting both a change of heart and the desire to release a statement saying he wouldn't tolerate people doing to his vans what he'd been doing to the sensibilities of Australians for a decade. More recently Wicked Campers has moved to other pastures including normalising the use of hard drugs at a time the broader community is discussing pill testing at festivals. While many accept drug use as a societal norm, few would agree with making light of the issue of the use of hard drugs through open messaging on the streets, especially to an unfiltered audience.

Adrian Buckley, promoter of Wollombi Music Festival has had enough and issued this statement:


As a festival we’ve worked hard to not only grow as an event but also as an event dedicated to doing good things in and beyond our community.

We’re great believers in embracing inclusivity and diversity at Wollombi and creating a space where everyone can feel comfortable, safe and enjoy themselves. Love is the driving value of Wollombi. Love for music, love for the arts and love for each other.

For years we’ve had concerns about any Wicked Campers turning up at the festival with some of their pathetically unfunny and misogynistic slogans splattered across its panels. We’ve actively discouraged people from hiring them and encouraged patrons to look elsewhere, but this year we’ve decided to ban them full-stop. Not just if a van has a demeaning slogan. If ANY Wicked Camper turns up at the fest they won’t be welcome.

We know other events like Splendour have voiced their opposition, but we’re not sure if any other festival has banned them outright. We know we’re small, but any impact we can have on changing the culture of demeaning and abusing women disguised as good fun or an example of free speech we will.

We want other festivals in Australia to join us and let Wicked Campers and their sociopathic owner John Webb know abuse of women has to stop and Wicked Campers needs to change. 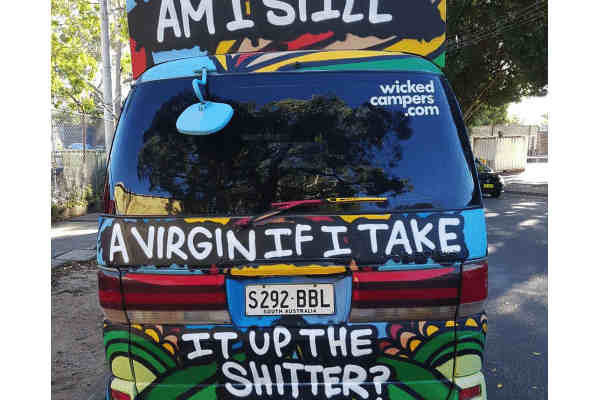 2015 Media Statement from John Webb who finally found religion. But only after people began defacing his vehicles.

Wicked Campers would like to address the public concern surrounding its use of controversial artwork on vehicles in Australia & New Zealand.

To meet the commitments made in our prior Press Release, we employed a team of highly-intelligent, socially-conscious super monkeys to closely monitor the subject matter featured on our vehicles and scream loudly when offended. This initiative had been code-named ‘Moral Monkey Squad’ under a carefully constructed mission statement:

‘Moral Monkey Squad are dedicated to satisfying the whims and wishes of the humour-inept, self-righteous moral majority while wearing little monkey tuxedos and funny hats’

Unfortunately, while flinging poo at one another during a recent Wicked Campers Team Building exercise, some of the monkeys were injured and thus have been rendered unable to perform their duties as servants of the morally-righteous. But don’t worry, they were swiftly euthanized and will be replaced by a new team of genetically-modified seagulls who will work for an increased, union-initiated salary of 5 hot chips per day (chicken-salt is optional). You know what they say - pay peanuts & you get monkeys. Here’s hoping the increased incentive of hot chips will serve as a driving force in ridding our company of the degenerate subject matter that has for too long tainted our good name. The Seagulls will all wear little psychedelic berets, but if this offends the colour-blind in any way we will swiftly act to change this.

Furthermore, it has become apparent that several bad-asses in the community have accepted our prior offer to repaint or cover any material they deem to be ‘offensive’ or ‘not fit for communal viewing’ by completely destroying our vehicles. Or by spraying very creative & socially-inspiring messages such as ‘dickhead’ or the repetitive use of the word ‘no’.

While this is all very inspiring and we truly appreciate the input of a very boisterous minority, Wicked Campers will, from this day 24th April 2015, be seeking to prosecute any person or persons who paint, cover or in any way damage a Wicked Camper or any property associated or belonging to Wicked Campers.

To reiterate - Wicked Campers will no longer permit individuals or groups, to in any way manipulate the artwork or general appearance of its vehicles or property. Any person or persons found to be doing so will be swiftly referred to the police/authorities.
It is generally understood that the penalty for such acts is public flogging, but we may be ill-informed in the specifics as our Legal Team consists of 3 crayon-wielding possums and one very good-looking banana.