The Umbilical Brothers Want You To Get Out More The Umbilical Brothers have been everywhere, man. This duo has visited 40 countries, bringing a hybrid of mind-bending comedy and back-breaking physicality to audiences all over the world.


In their new show 'The Distraction', The Umbilicals want to explore new depths, try things never attempted, and address the world's addiction with screens in all their forms.

If you love staring at screens, this one's for you. The show will be performed simultaneously on stage and on the big screen – like nothing the duo have ever done before.

Let's face it. . . 'The Distraction' will definitely contribute to screen addictions everywhere, and that's okay.

Here, The Umbilical Brothers (Shane Dundas and David Collins) give us an insight into 'The Distraction' and their success over the years.

Where has the inspiration behind this show come from?
The world’s addiction to screens and to perform something that has never been tried before. By us or anyone else. Turns out making something no one’s ever done before is HARD!

What's the most effective way to come up with new movements/sound effects for your shows?
Move and make sound.

Have you noticed over the years a particular element of your performances that audiences love the most?
The raw sexual connection between the audience and our lighting and sound technicians. We kinda ride on their coat tails. 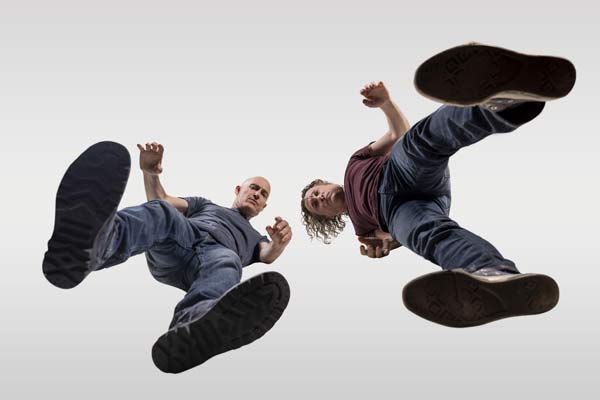 You've both performed all over the world. Where has been your favourite place to perform (be as specific as you like!) and why?
David: Scotland, because it wasn’t Belgium.

What are you most looking forward to about presenting 'The Distraction' to audiences this year?
New shows are so much fun in their early stages. We’ll be trying new stuff out each night for about two years, then it becomes more like a job. So if you can, try come in its first two years. Which is right now.

To someone who has never been to an Umbilical Brothers show before, describe what they're like in three words.
Not Carl Barron.