The Brisbane premiere of The Australian Ballet’s special encore season of ‘The Sleeping Beauty’ was a night of magic and splendour.

The most expensive production in the company’s history, ‘Beauty’ immediately swept me into another world, care of award-winning, internationally acclaimed designer, Gabriela Tylesova. The sumptuous costume designs and opulent, 18th century baroque-inspired scenography must be seen to be believed.

The tulle underskirts of the women courtiers are so light, that they float with the feathery weightlessness of ostrich plumage, while The Lilac Fairy’s cascading, multilayered tutu (a month in the making) rivals the natural beauty of a Reflex Chrysanthemum.

Seamless scene changes propel the storyline of this much-loved fairy tale, with my favourite being at the end of Act I, Scene 2 ‘The Palace Gardens’, when giant, silhouetted storybook vines glide across the stage to envelope the enchanted kingdom. It was however the opening of Act III ‘The Palace’ that elicited gasps of wonder from the audience, when three candlelit gold and crystal chandeliers ascended to twinkle over the scene of Princess Aurora’s and Prince Désiré’s wedding.

The 42nd performance of McAllister’s ‘Beauty’ starred Principal Artist Amber Scott, as Princess Aurora. Exquisitely delicate in frame, Scott handled the technical challenges of the role with aplomb, with the only hint of strain a slight quiver of her foot during the notoriously difficult dance sequence, the Rose Adage. 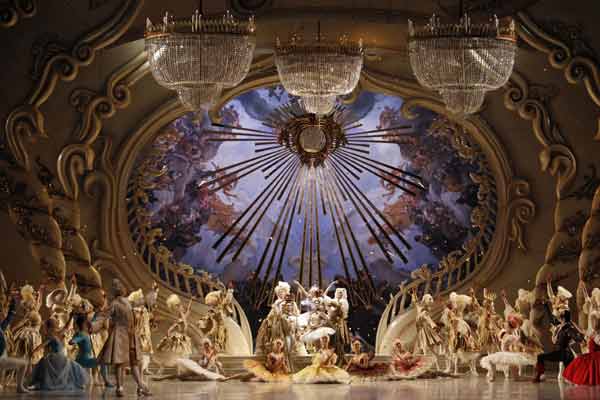 Principal Artist, Ty King-Wall, played Prince Désiré with quiet nobility and impressive athleticism, commanding the stage in a stunning sequence of leaps and pirouettes during the wedding scene. Soloist Valerie Tereshchenko was delightful as The Lilac Fairy, delivering some of my favourite moments of the night. The gentle lift of her staying hand used to both reassure and repel throughout the show drove the direction of the narrative.

Guest artist Gillian Revie (ex-Royal Ballet) was magnificently menacing as Carabosse, conveying both the beguiling and malicious sides of the wicked fairy.

While the grandness of the ‘Beauty’ left me spellbound, it is some of the more subtle moments that have lingered. The Queen (played by guest artist Jayne Beddoe) reaching out to The Lilac Fairy, imploring her to revive her lifeless daughter. The soft brilliance of the lilac lighting that bathes The Lilac Fairy as she thwarts Carabosse’s ambush of Prince Désiré. The in-flight beating feet of Senior Artist, Brett Chynoweth, during the Bluebird pas de deux. The shrill, piercing sound of Queensland Symphony Orchestra’s string section bringing to life the threat of Carabosse’s rat henchman.

Such was the majesty of ‘Beauty’, that The King treading on The Queen’s train and a ballerina pausing to retie her ballet shoe ribbon felt like necessary evils for a show of this calibre.

Never in my life have I seen such a beautiful spectacle, and I doubt (and fear) I ever will again.