Undoubtedly one of the greatest and most prestigious ballet companies in the world, The Royal Ballet will return to Brisbane for the first time in fifteen years with two exclusive performances to QPAC's 2017 International Series.


The two Royal Ballet original concerts, including the abstract, contemporary ‘Woolf Works’ and an adaptation of Shakespeare’s ‘The Winter’s Tale’, will be performed by the company for the very first time outside of their home of the Covent Garden, London.

After choreographing a revival of classic ‘Alice’s Adventures in Wonderland’ for the company, The Royal Ballet’s Artistic Associate Christopher Wheeldon desired to recreate another staple British story on the ballet stage, though one an audience could really sink their teeth into. “I wanted to find a story that had a little bit more muscle than ‘Alice’, as well as a Shakespeare play that hadn’t been turned into a ballet yet, because quite a few of them have,” he explains.

“I approached a director friend of mine, who’s directed a lot of Shakespeare, and asked which of the stories he thought would work well as a balletic version, and he came up with ‘The Winter’s Tale’.” However, Christopher wasn’t necessarily sold on the idea in the beginning, as he realised the sheer intricacy and depth of the play could make quite the challenge for a ballet. “Originally I thought it was a little crazy because it’s so complex in its story and there’s a lot of characters.”

“I worked very closely with my composer Joby Talbot. We sat down together and took a synopsis that was actually written for me by a director, Nicholas Hytner, who was the Director of the Royal National Theatre at the time.

“We took on some of his suggestions and actually threw some of them out, because it was still quite complex in its storytelling. We really just streamlined it as much as possible, and we spent quite a long time doing that.”

Within the ballet world, ‘The Winter’s Tale’ may be one of the lesser known Shakespearean works than classic stories such as ‘Romeo and Juliet’ and ‘A Midsummer Night’s Dream’, but according to Christopher the play quickly became one of the more dramatically beautiful stories he’d found to portray in balletic form.


And quite the story it is, amid the tyrannic jealousy displayed by Leontes of Sicilia of his wife Hermione in the opening act and the charming young love of Perdita and Florizel in the second, it comes as no surprise that the developmental process was not particularly rapid, nor was it without challenge.

“Shakespeare was just the greatest story teller, and these are great stories. Though the stories aren’t the only thing that’s great about the Shakespeare plays – it is the language and the poetry, but you obviously have to strip quite a lot of that away when you are making a ballet.

“You do hope you can convey some of the poetry of the prose within the movement, but it’s mostly looking at the images and the storyline, and the ways to convey them through movement. At its core, a story ballet has to be about a great story, with larger than life characters and emotions that are easily translated into movement, which Shakespeare certainly offers all of.”

The relatable story of ‘The Winter’s Tale’ itself, despite being written nearly 400 years ago, was certainly part of the appeal for Christopher, which he believes continues to draw audiences to any Shakespearean work. “I think the story offers a lot of contrast, [with] the dual nature of the show, and the tragedy comedy nature of ‘The Winter’s Tale’,” he says. 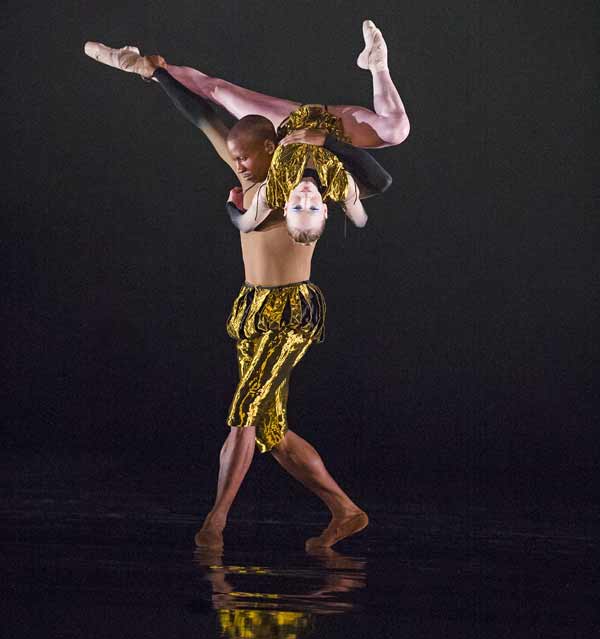 “There’s a lot to get your teeth into as an audience member with the meaty scenes of Leontes’ unexplained jealousy, and I think everyone recognises a little bit of Leontes in themselves. Jealousy is a fairly common trait in us human beings, perhaps none of us take it to the extreme Leontes does in the play, but I think all of the emotions in the play [are highly relatable].

“There’s a lot of variation in the story, with characters which the audience can relate to quite easily. There’s several love stories; the plighted love of Leontes and Hermione, and the young love story between Perdita and Florizel, and they’re all watched over by this wider character Paulina, who is instrumental in bringing Leontes’ realisation that he’s been a dreadful tyrant… and then despite this tumultuous three-act story, in the end, all seems right.”

The fairy tale doesn’t end there though, with the timelessness of Shakespeare’s literary talent allowing for Christopher and the show’s designers to conjure up their own time period for the ballet worlds of Sicilia and Bohemia. “We didn’t want it to be time-specific, so we chose for it to be fluid in its timeframe and a style that feels contemporary but still speaks in the time of Shakespeare,” he explains.

“Because it’s a fairy tale it allows for that, as many of Shakespeare’s plays do. They allow for the re-imagining within different periods of history.”


Alongside the contemporary revival of Shakespearean worlds, The Royal Ballet will be bringing the imaginative and abstract ‘Woolf Works’. Directed and choreographed by the company’s Resident Choreographer, Wayne McGregor, the triptych ballet was inspired by three individual works by 20th century modernist writer Virginia Woolf.

Highly unique to the Royal Ballet and to the art form as a whole, ‘Woolf Works’ ties elements of both classical balletic storytelling and contemporary abstract movement. “Even though it’s abstract, it very much gives a clear sense of Virginia Woolf’s work,” Christopher tells of the piece.

“It’s very contemporary in its use of movements and it is visceral and quite a moving experience, not unlike a traditional story ballet in any way, but equally unlike an evening of purely abstract movement. It’s quite the unique hybrid of the two, in a sense. It’s a very contrasting evening to ‘The Winter’s Tale’ which is very much all about the story and quite more contemporary classical ballet. ‘Woolf Works’ is something really quite different but very, very beautiful.”