Hilarious from the get go, the State Theatre Company of South Australia’s brilliant production of 'The Popular Mechanicals' had audience members in stiches through until the very end!


Ridiculous in nature and silly to the core, the tale follows the misadventures of the rag-tag bunch of tradesmen first brought to audiences in Shakespeare’s 'A Midsummer Night's Dream'. The audience is provided an insight into what these ‘actors’ got up to while preparing their play for the Royal Wedding, how they tackle the problem of one of their cast being transformed into a donkey and ultimately how the final performance was received.

A raucous rollick not to be taken too seriously, the excellent cast brought to life a diverse bunch of characters each with their own laugh out loud quirks.

Opening with an energetic and giggle inducing tune describing audience members as ‘monsters in the dark’ the tone was set for a performance that not only aimed to bring laughter to the room, but also set out to make subtle jibes at the nature of performance itself. 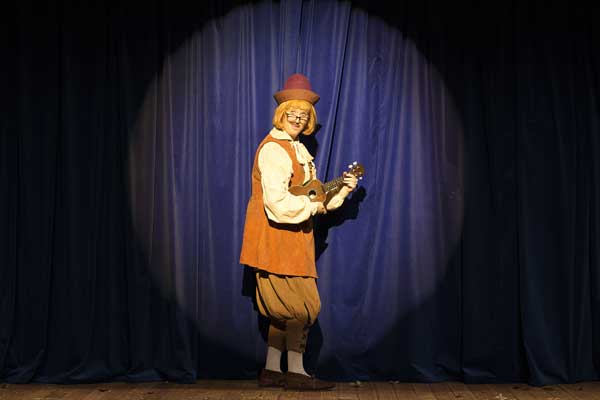 A well-designed set featuring a built-up stage as the centrepiece was utilised wonderfully to focus the attention of the audience and the absurd inclusion of modernised props – including telephones in a performance supposedly set in Elizabethan times – only added to the hilarity.

Stand-out performances came from Charles Mayer in the role of Nick Bottom / Ralph Mowldie who played absolute arrogance to perfection and Amber McMahon in the role of Snug was beautifully dopey and vague – I thoroughly enjoyed every moment of her performance.

Strap yourself in for a reel of highlights throughout the show which include a ridiculous amount of rubber chickens, a flirty funny take on the classic jazz tune 'Minnie The Moocher' and some of the most questionable makeup choices this side of the '80s.

Incorporating elements of slapstick, stand-up comedy, musical theatre and puppetry – just to name a few, expect the unexpected when you settle in to the Space Theatre to experience what can only be described as beautiful ridiculousness.