While it is accepted that it is dangerous to judge a book by its cover, what about judging an author by their books?


Joanna Murray-Smith’s 'Switzerland', presented by the State Theatre Company, as a play, compels audience members to challenge the validity of their instinctual perceptions. To efficiently function as humans, we subconsciously make hundreds of assumptions every day; doing so, though, exposes us to the risk of misconceptions and deceptions, as 'Switzerland' powerfully demonstrates. 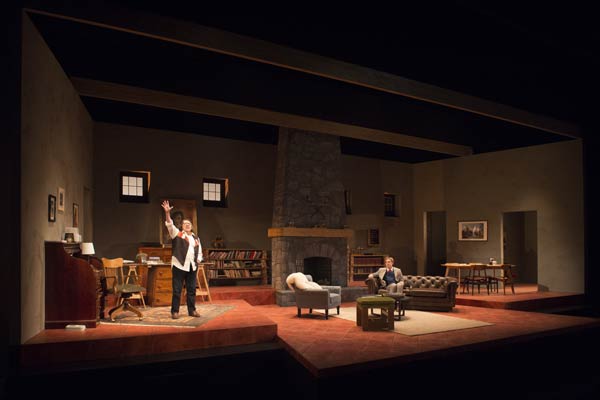 When Edward Ridgeway (Matt Crook), a publishing emissary, first intruded upon the cavernous inner sanctum of the reclusive author and creator of Tom Ripley, Patricia Highsmith (Sandy Gore), the discord between the odd couple resulted in such hilarity that it became difficult to envisage how matters could ever descend into drama or tragedy. The initial tone is an artful lulling of the senses; a charismatic manipulation. By immediately judging each character on our initial impression, we had taken the bait. While, in retrospect, each character incrementally transformed their essential nature before us, the veil was only lifted from our eyes when it was too late, leaving us feeling betrayed and doubting the acuity of our senses. The play, then, replicates the sensation of reading a Patricia Highsmith novel or indeed, perhaps, to a lesser degree the invasion felt by a victim of the talented Mr Ripley. With subtlety and mastery, Crook and Gore evolved on stage; a stage that the pair occupied together for almost the entire ninety minutes. We were disarmed by Matt’s boyish naivety while simultaneously chortling along with Sandy’s cantankerous cynicism.

As the novelist unleashed acerbic tirades against the computer age and American imperialism, we heartily joined in on the party, only to guiltily recoil from our allegiance when she turned her attention to “the blacks, homos and Jews”. Like a see-saw in slow motion, sympathies towards the respective characters shifted as the show progressed. The two actors are to be commended for their triumphant portrayal of this journey. While the characters transform before the audience’s eyes, so too does the play itself. It begins like a sitcom and ends like a thriller. At some point in the middle, though, you also become aware that there is a story within the story; that the characters are analysing the creative techniques that are simultaneously being employed: they are discussing how to deceive while you are being deceived. Ultimately, though, Highsmith, the grand deceiver, crafted the greatest deception of all: that her suffering was necessary for her art. Like her victims, she only attains enlightenment when it is too late. 'Switzerland' is consciousness-altering and a necessary work in an era of fake news and internet scams where we are more vulnerable to deceit than ever.