Love is in the air at Western Australian Academy of Performing Arts (WAAPA) with their mid-semester musical production of Baz Luhrmann's classic 1992 film 'Strictly Ballroom'.

For the musical's Director Crispin Taylor, it's a production that ties in closely with his own background in performing arts.

“I was actually studying at NIDA the year after the film came out,” Crispin says.

“Baz and Catherine [Martin, who would marry Baz in 1997] both went through NIDA just before I did – Baz in the directing course and Catherine in the design course – 'Strictly Ballroom' was very iconic then and very much in our minds because there was a sort of ownership at NIDA of Baz and Catherine, and of course it was a start to incredible careers for both of them, so I'm very fond of it.”

Originally a stage play, the story of 'Strictly Ballroom' has become woven into contemporary Australian pop culture, as iconic as the Sydney Harbour Bridge, the Hills Hoist and Vegemite.

Young ballroom dancer Scott (played by Paul Mercurio in the film) is a maverick who wants to perform his own steps and takes on shy young dancer Fran (played by Tara Morice in the film) as his rookie partner.

Defying both convention and their families in their quest to win the Pan-Pacific Grand Prix Dancing Championship, Scott and Fran discover that to be a winner, your steps don’t need to be strictly ballroom.

“The original play that Baz and Catherine did was based on Keith Bain, who was my movement teacher when I was at NIDA, so there's even more of a connection there,” Crispin reveals. 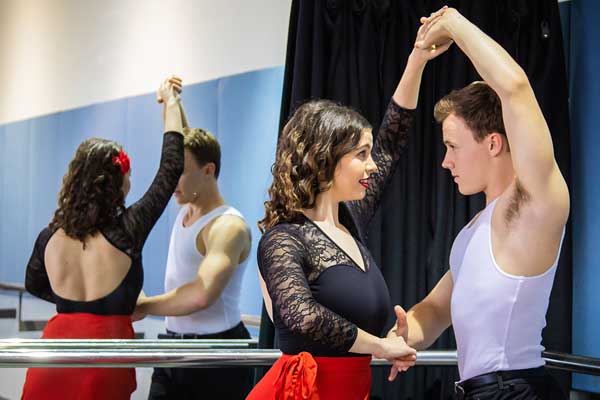 “He was the young Scott character when he was a younger ballroom dancer and was doing improvised, radical, inventive steps rather than the strictly ballroom choreography you're meant to do. He's now passed away, maybe 10 or 15 years ago but he was a great, really lovely and very generous man.”

Performed with a cast of second and third year WAAPA students accompanied by an orchestra of the academy's music students, 'Strictly Ballroom' is the biggest production WAAPA has ever staged.

“This is the biggest production that we've ever tackled at WAAPA,” Crispin confirms.

“The set itself, we're using parts of the set that are five metres tall, then we have 40 in the cast and about 20 in the orchestra and over 200 costumes. It is absolutely the biggest, most lavish production we've ever staged.”

As Director, Crispin says this production is not about a scene-for-scene remake of the film, but getting to the beating heart of the story.

“Essentially this is about a young artist who is struggling with having to conform within the boundaries of an art form he's worked to achieve all his life,” he says, echoing the comments made by Eddie Perfect who contributed original songs to the score.

“Now he's inspired to break free of that and that's what the production is about; for us it's not about recreating the film on stage, it's about a young artist. It's got a sense of lots of '80s movies like 'Footloose' and 'Flashdance'. That's the heart of our production, for sure.”