There’s likely not a single person who can say their life hasn’t been touched by the timeless magic of the great author, Roald Dahl.

The wit, charm, magic, and humour of one of the greatest writers of children’s stories has, for generations now, impacted the lives of many in one way or another – now it’s time for his magic to take shape on the live stage.

shake & stir Theatre Company return Dahl’s ‘Revolting Rhymes’ to the stage of La Boite Theatre this month in the midst a national tour. “All of us in the cast have similar stories of what Roald Dahl meant to us growing up,” Artistic Director and cast member, Nick Skubij says. “They’re children’s stories but they’re written with a sophistication and an assumption that kids aren’t idiots, which is why it felt like, for me, he was speaking to me, and not speaking down to me, and speaking to me in a way that he was being cheeky and it was okay.

“‘Revolting Rhymes’ is of course a twisted retelling of well-known fairytales. It’s a thrill to be able to take that Dahl cheekiness to create our own adaptation and rework it for audiences now.

“That’s even more important, for this digital generation to be introduced or reminded of the stuff that engages the imagination and engages kids to participate in the naughtiness and participate in it.”

A fun and energetic production that Skubij says doesn’t feel like work, even hearing about the fun of the show elicits fond memories. Certainly big shoes to fill, but shake & stir have let their imaginations run wild. “We’ve got a series of Dahl works we’ve done over the years,” Skubij explains. “’Revolting Rhymes’ is a remount of the first Dahl work we did, we’re about to have our third season in Brisbane. Each production has a different style and scale. 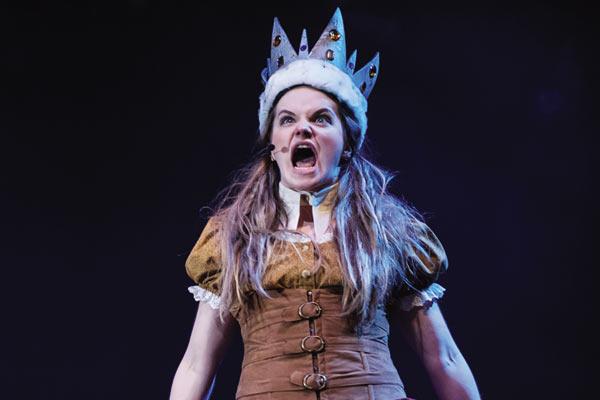 
“What we’ve found over the years with the different styles of Dahl we’ve done, is there’s a lot of expectation – you want to stay true to the original intention and keep it feeling like a story, but you also need to update it and appeal to those kids who are used to more than that.

“It’s a fine line to tread, to not mess with the charm of the stories but also to pitch it – everyone remembers an encounter with Roald Dahl – you want to balance the new version with the original, beautiful story, and wanting people to use their imagination. This is still very much theatre and literature on stage.”

The previous runs of the production have received rave reviews – it’s all very well for professionals to look at the performance and be drawn back, but the reception from the younger members of the audience, the kids who, as Skubij says, have been pulled away from their iPads to watch grown-ups play silly on stage, well, their reaction is the only thing that matters.

“The reaction from the audience is incredibly engaged – the kids are invited to call out, squirm around in their chairs, the shows are very loud. With Roald Dahl, parents and adults in the audience are engaging as well because he’s written in these layers that are there directly for the adults that go over the kids’ heads.

“Grandparents, parents, kids, all in the same room equally laughing at different thing, and I think it’s exciting to have a show that can appeal genuinely from 3 to 93 and everything in between.”