Who could forget their first love?


Nancy (Essie Barrow) and Alex (playwright Iskandar R. Sharazuddin) met in biology class, dissecting a pig heart. Things blossomed, and they believed their love was eternal – until it wasn't.

It's not until they're reunited ten years later that another dissection begins, and Nancy and Alex are forced to confront and unpack their short-lived relationship. Who hurt who? Who is holding on too tightly to the trauma?

UK production 'Post-Mortem' from 45North/Ellandar Productions, playing Perth and Adelaide, explores young love and all of its fragments, good and bad.

Here, Iskandar R. Sharazuddin tells us about the show.

Tell us a little bit about 'Post-Mortem'.
'Post-Mortem' is a new play essentially about the foibles of young love. It looks at that type of love that can only be teenage love, a love that knows no boundaries, when young people become completely entangled in one another’s lives. However, the couple in the play, Alex and Nancy, have a shared traumatic event that shakes them loose from one another. We visit them ten years later at a wedding (not theirs), they haven’t seen each other since and it is at this wedding that they begin to dissect their past lives, asking questions such as 'who hurt who?'. They soon find themselves confronting conflicting narratives about the end of their relationship as they have to perform their duties as Maid of Honour and Best Man.

As the playwright, does the show bear any resemblance to your real life?
'Post-Mortem' began life as a different play in 2010 titled 'The Hill And The Piano'. When I look back on the latter play now it is very clear to me that it was a cathartic writing exercise to help me process the end of my first relationship and love. It was overwritten and painfully elegiac. Since 2010 at different intervals I have picked up the piece to redraft, in 2015, I was fascinated with the idea that we, as human beings, have a tendency to mythologise our past and especially events of emotional significance like a formative experience in love, at least that is what I had observed. I was also interested in the malleability of memory and how two people could remember the same event in very different ways, not just emotionally but the actual order of events. I decided to write something new. I started the process by asking the question 'what in my own past do I have a tendency to mythologise?'. It led me straight to 'The Hill And The Piano'. Hence, 'Post-Mortem' is the product of those thoughts around self-worth and self mythologising, the malleability of memory, and the bones of an old play that was very much material excavated from my personal life. That being said the process of writing 'Post-Mortem' involved deconstructing 'The Hill And The Piano' and rebuilding it with new foundations. There are echoes of the original play and some theatrical fossils from earlier drafts within the current play, but now it feels a lot further away from me. Alex doesn’t feel like a representation of me or my experiences but rather a fictional character that has very familiar roots. Likewise, the situation in 'Post-Mortem' is a version of events that feel close to a personal experience but exist at a comfortable and necessary distance. I didn’t set out to write autobiographical theatre. 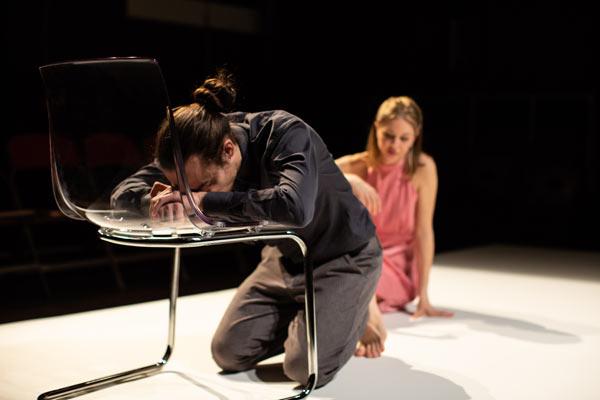 
What was your intention when putting the show together?
I wanted to write something small to begin with. The plays I tend to write are pieces of theatre with a lot of visual storytelling and larger ensemble casts that don’t comfortably fit snugly into a studio theatre or the Fringe circuit. I also wanted to push the form of the two-hander. Lately, we have seen a lot of social issue relationship plays where two characters deconstruct each other on stage. I find those plays very compelling, they’re hard to write and they are in essence the bare bones of drama. Two characters with clashing objectives. I wanted to challenge myself to tell a story with as few extraneous parts as possible.

It's a fusion of a few different things including dance and physical theatre. Why do you think the story is best told in this way?
This is a creative decision that comes out of collaboration. The director, Jessica Rose McVay, is a movement director and my background is in dance and gymnastics. We both felt that we could employ a different heightened theatrical language with a movement vocabulary for the play and that this would help to set 'Post-Mortem' apart as a unique fusion of forms. Furthermore, as I was writing I found that two characters who shared such a monumental emotional history with one another sometimes found it impossible to articulate their feelings through text. In some ways it was easier to let the text dissolve away and for gesture, movement, and dance to do the storytelling in those deeply emotional beats of the story.

'Post-Mortem' is premiering at Perth's Fringe World. Why do you think it belongs at a Fringe festival?
Fringe is an arena for new ideas. 'Post-Mortem' is a new idea. It informs a new way of working for me with a new collaborator, Jessica. Together, with some other performers who workshopped the play and Essie Barrow who is in the piece with me, we have created a play that hopefully pushes the form of the two-hander and explores something that has a universal resonance, young love. It belongs at Fringe because it is a self-contained piece of theatre that strips everything back to the bare bones of the medium. Two bodies, in a space wanting different things. In this way it is a play that can travel and reach different audiences. As the international Fringe circuit becomes more accessible to artists, I feel like we’re all searching for a piece of theatre that can reach a wide spectrum of theatregoers which says something both about ourselves and the world we’re living in.

What is the biggest misconception, in your opinion, about young love?
That it is fleeting. Whether it is a relationship that ends or not I feel like that first, formative, and young experience of love is so defining. I feel like people learn a lot about how to love when they first love and I think you carry that with you into relationships and the way in which you build and break trust with people in your life. 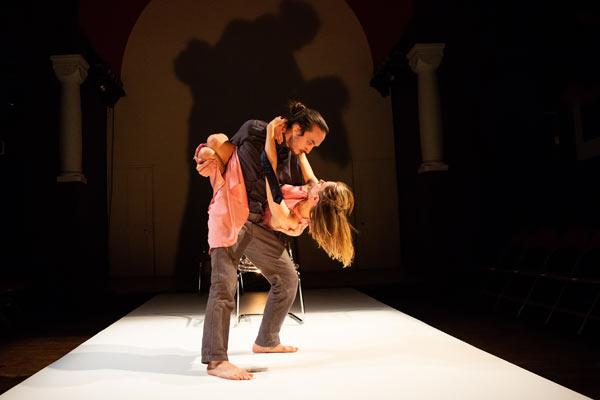 
You're performing in this show too. What's the biggest challenge of being behind the stage and in front of the stage for a show?
The biggest challenge of being both in this work, being the playwright, and one of the co-producers is, without question, the juggling of responsibilities and managing of relationships. Jessica Rose McVay and I are friends, but then we became collaborators as director and writer, during rehearsals I am an actor in her rehearsal room, and outside of all of that we’re business partners both with a financial stake in the play and the business of theatre. That is hard. That gets muddy sometimes and that involves a serious amount of trust and respect. When I am an actor my job is to be responsive, to think, to be pliable, to try new things. It is very hard to be all of that as well as the playwright, because as the playwright I want to be actively rewriting in the room, editing, clipping, and amending. Sometimes you begin to worry if the old adage of 'jack of all trades and master of none' is apt? But this is the pressure on freelance practitioners who self-generate work. We all learn to juggle those responsibilities and hope that we can still make good work at the same time, despite splitting our energies left, right, and centre.

And on the other hand, what has been rewarding about it?
Well, that is easy. The collaboration with Jessica which has been based on trust and a shared creative intention has led to a new creative relationship in my work. I rely on Jessica to be my eyes and ears on the play when as the playwright I have to be 'in' the work looking out, not the other way around. This is not an easy relationship to negotiate with someone, so it is pretty special when you find you can work in this way. In fact, this has led Jessica and I to work on another piece for Fringe World, '(un)written • (un)heard', which is a continuation of our working relationship on a new dance-theatre work which takes all of what we have learnt collaborating on 'Post-Mortem' and synthesises that into a process to create something entirely new.

What is the ideal audience reaction to ‘Post-Mortem’?
I have no idea how to answer this. I suppose I would like people to come out and talk about first love. Sometimes those experiences were painful, sometimes overwhelmingly disappointing, or funny, or heart-breaking. Sometimes people are still with that person. However, I think one common factor in a lot of people is that they mythologise their own pasts. I feel we place these relationships on pedestals, or sweep them under rugs, we do our best to forget them, or to glorify them. They are such crucial experiences, integral to our learning, and often can really shape who we become. I think it is important to not mythologise them and remember them as they were, what they taught us, and what we’ve taken from them. Sometimes it is fun to look back, and that is okay, in a world that is constantly looking forward I get lost a lot of the time and have to look back to work out where it is I am going next. Maybe this play will encourage some people to do that. Or maybe they’ll just like the words and the dancing. That’s also fine.