Planning for every iteration of Perth’s Fringe World starts about a week after the last one ends, so the upcoming 2022 festival was already popping off earlier this year.


From comedy acts, to circus and street performances, to musicals, to physical theatre, Fringe World 2022 will bring the best of home-grown and Australia-wide talent under one spiegeltent. Well, many spiegeltents, bars, hotels, and theatre spaces. Presenters ARTRAGE have a smorgasbord of venues to choose from, and the performers have the chance of their lives to enter the stage for the first time or return.

“You have to be a special kind of person to work in a festival,” Program Managers Kylie Baker and Julia Martini say. “You either love the manic nature, or you’re good at dealing with it. It’s so unpredictable, but the payoff is so high.”

Classic Fringe smashers like Hans and Briefs’ 'Bite Club' (the latter also coming to Brisbane in December) will return next year, among others. 
Due to events that rocked the entire world, the last Fringe World was put under a lot of strain, the performers and organisers as well. Many performers were out of work, and Australian arts workers from all industries were left to fend for themselves. While things have started to pick up again, 75 per cent of the upcoming Fringe World Festival performances will be WA-based.

With fewer options in terms of who they could invite to the festival to perform or work, Kylie and Julia say that it has turned their gaze towards smaller acts, lesser-known artists, and up-and-coming talent.

“We’ve discovered a really wonderful array of local talent, and we’re really privileged to showcase them.” 
The lack of opportunity over the past two years has brought out the hunger in many of these artists. Fewer ways of expressing their artistic expertise means that they have something to prove with this coming Fringe World. They are focused on presenting the best version of their acts to this festival.

“They have a lot to make up for from the last couple years where they’ve been so badly affected. So we’ll provide that platform for them safely to an audience that is desperate to engage.”

Perth Fringe World has grown in exponential ways over the past few years. Once it was a festival that artists could do for a couple of weeks in January, and now it’s one of the largest platforms an artist could have to perform annually.

“We’ve been lucky to provide a bit more certainty for them to perform, collaborate, work together, and come up with new concepts,” Kylie says. 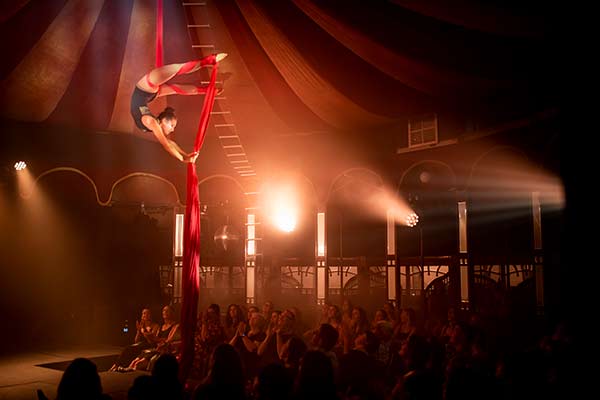 
Julia adds, “Because there was a gap with no visitors, there was this realisation that, ‘If they’re not doing it, someone else can, and I can do that’. So wrangle your friends, wrangle your tech designer, and wrangle someone else who can choreograph. They’ve come together to create all these great new productions.”

As Julia and Kylie point out, the best thing about Fringe World is how it brings people together. From performers, to hospitality staff, to technicians, to the ticket-buyers, every year they create a community that brings art, life and enjoyment away from the fringes and into centre stage.

Perth Fringe World 2022 is on from 14 January-13 February.
Tweet
« High Tea With BOOFF – BOOFF Pens An Open Memory Briefs Factory Sink Their Teeth Into Bite Club For Christmas »
back to top