A kaleidoscope of colour meets a mixtape up of modern music in the on-stage adaptation of Baz Luhrmann’s 'Moulin Rouge!'


A good adaptation honours the original, respects its fanbase, lifts us up where we belong and reinvents itself for its new environment and time.

By these standards then, ‘Moulin Rouge! The Musical’ isn’t a good adaptation. It’s a spectacular (spectacular) one.

Director Alex Timbers is largely to thank for this. Having been given the freedom from Luhrmann to make the production his own, what results is an impressive celebration of divas, vibrant costumes, diversity and pop music that is so exciting the audience tonight (4 June) would stop and cheer mid-song.

Like the original, the on-stage version is set in Paris at the turn of the 20th century and follows Christian, a wide-eyed poet-songwriter, who falls in love with the Moulin Rouge’s beautiful diamond Satine. 
Songs spill out of him like water flowing – but they’re not all as fans will remember.

Being decades since the movie’s release in 2001, the original jukebox of popular hits has been remixed, predominantly with tunes from the noughties.

‘Children Of The Revolution’ meets Lorde’s ‘Royals’ and Fun’s ‘We Are Young’ in an electrically addictive introduction to the bohemians while ‘The Sparkling Diamond’ layers the original ‘Diamonds Are A Girl’s Best Friend’ and 'Material Girl’ with Beyonce’s ‘Single Ladies (Put A Ring On It)’ and Shirley Bassey’s ‘Diamonds Are Forever’, pronouncing Satine as a strong, independent woman. 
‘Shut Up And Raise Your Glass’ is a fresh new track and a stunner at that. It brings Pink’s ‘Raise Your Glass’ and Walk The Moon’s ‘Shut Up And Dance’ together in an ingenious love medley bursting with so much energy, truth be told, I literally raised my glass to them.

The mash-ups are bold, yet considered, only ever adding dialogue to the story. Despite dominating the soundtrack, fans will be grateful to hear that its pivotal numbers, ‘Your Song’, ‘Nature Boy’, ‘Come What May’ and ‘El Tango De Roxanne’ have been left in their entirety.

The cast that delivers them is nothing short of incredible. Alinta Chidzey is a powerhouse voice who commands the music of the divas she covers. She plays Satine with a tough exterior that softens as her backstory unfolds, offering a dimension to her character that the movie did not. 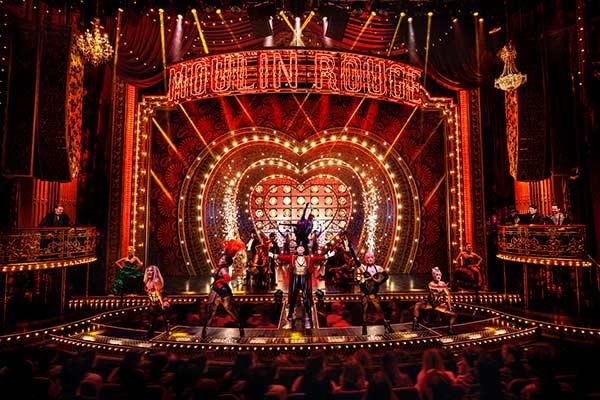 
But though Satine sparkles, it’s Des Flanagan (Christian) who shines.

Doe-eyed and innocent, Flanagan’s performance is nostalgic to the film, singing every note with the same hope and joy of a man in love. The element of dance only further showcases his talents. It's highlighted on ‘Chandelier’ as he sweeps across the stage in an emotional push-and-pull, desperately longing for a woman who can’t love him back.

It’s been 21 years since the world was first introduced to ‘Moulin Rouge!’. Who knows if Baz knew it would come this far. But with its classic tale of star-crossed lovers and a soundtrack that adapts to the ages, it’s a good bet the musical will run for 21, too. Maybe even 50. It’s that delightful.