'Club Cremorne' is back by popular demand at Queensland Performing Arts Centre.


Sit back and relax, as the likes of beat boxer Tom Thum, burlesque star Jacqueline Furey, Circus Company 2, circus/physical theatre performer Mayu Moto and a variety of surprise guests (including king of 'boylesque' Mark Winmill who recently enjoyed a guest spot!) come together in this collision of genres and art forms.

It's a variety show not for the faint of heart, and one so fun it had to come back to delight audiences for another round.

With such a wide array of acts and entertainment, an event such as this surely needs an MC – which is what Brisbane-based comedian Damien Power is here to do.

Here, he has a chat with us about his role in the show, and what 'Club Cremorne' has to offer.

How are you finding the pressure of being MC in this show?!
It’s not too bad. If I really bombed I could just bring on a circus act and they'd do all these flips and tricks and people would be so blown away they'd forget how much I sucked.

What's your favourite thing about being a part of 'Club Cremorne’?
Normally I only work on stand-up shows. So, to MC a show with trapeze, burlesque, hip hop and tightrope, it’s incredible!

What's one thing an MC can get away with that most of the other cast members can’t?
Abusing the audience (the audience secretly enjoys being attacked). 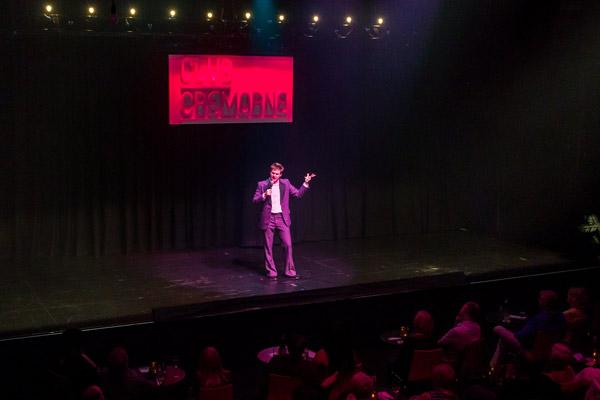 
Why do you think the element of comedy fits so well within the show?
Because it’s a nice break between such varied acts.

There's so much to the show. Which element/genre is your favourite and why?
Well it’s all mind-blowing but Tom Thum (the beat boxer) is incredible. Everyone is constantly blown away by his act. I’ve seen it many times but it still just blows my mind. All the acts are international standard. It really is a show that couldn’t happen if it wasn’t during COVID because they’d all be on tour elsewhere.

What kind of preparation goes into a show like 'Club Cremorne’?
The performers in this show have all been performing for years honing a very particular craft. There’s decades of experience in this line-up.

How would you sell 'Club Cremorne' to an apprehensive audience member in one sentence?
Some of the best performers in Australia, from all different types of performance backgrounds, all in one show.

Tweet
« Tandanya National Aboriginal Cultural Institute – A Hub For Creativity, Expression And Fun This Adelaide Fringe Faulty Towers The Dining Experience – Serving Up Laughs For Its 14th Year At Adelaide Fringe »
back to top