For audiences looking to hit the nightclubs, Queensland Performing Art Centre’s 'Club Cremorne' is the place to go. Back by popular demand, this pop-up cabaret show has enough entertainment on offer that will surely tantalise the saints and satisfy the sinners.


Conceived in response to ongoing restrictions, 'Club Cremorne' is a show spawned from adversity and developed for success. Like most artists who adapted during times of uncertainty, this event bonds the industry together through a variety show – with everything from circus acts to beats, burlesque and even poetry. The all-sorts styled production presents a delectable smorgasbord of local talent, and on the menu is something to tickle just about everyone’s fancy.

'Club Cremorne' is easily an evening of celebration – both for the wonderful artists on stage and for the return of live performance. As one of the first productions back since the months-long closures due to COVID-19, the event brings back a well-deserved cabaret experience.

To create the inviting atmosphere, the Cremorne Theatre is transformed into a dimly-lit and hazy, modern speak-easy bar – retaining a clandestine and exclusive aesthetic, just minus the police raid on social distancing. Cabaret seating intimately spreads through the floor area, with extra raised sections towards the back (and for those incoming sell-out shows). There’s a din chatter from expectant audience members, who aren’t able to predict what’s in store. In fact, special guest artists will continue to join the line-up of 'Club Cremorne' during its season, adding to the overall spontaneity of the production. 
Regardless of who appears on the bill for each performance, 'Club Cremorne' has a lot on offer, and every act is complemented with an edge-of-your-seat ‘wow’ factor. Hosted by internationally-renowned Brisbane-based comedian, Damien Power, the 70-minute show flies by, especially with Power’s laugh-a-minute segments. To put it frankly, Power literally powers through gags, poking fun at generational gaps, his dysfunctional family in Toowoomba and society during COVID – even referring to his stand-up career as an “essential worker”. With a Dave Hughes quirk and 1970s flared suit, Power masters this ceremony and his role as M.C.

What’s to follow in the 'Club Cremorne' are death-defying stunts and soulful music, which if the crowd were allowed to get up and dance, they totally would. Triple threat spoken-word poet, rapper and emerging singer, Sachem, had the audiences swaying and grooving to his original track 'Motherland' – an ode to the places we call home, whether within ourselves or in a physical place.

Circus and physical theatre performer, Mayu Moto gave a sensual and unconventional performance on a vertically hanging rope, pulling herself up with ease. Moto’s strength is to be well-admired, especially as she aerially twisted and turned in all types of inversions. Also, performing contortions was circus performer Phoebe Armstrong on the trapeze. Armstrong was equally intense as she showed off her flexibility.

One of the most impressive moments of the production came from acrobatic and circus performer, Chelsea McGuffin, who danced a ballet-inspired routine on a tight wire. Jaws dropped to the floor as she walked on pointe across the itty bitty line. McGuffin made balancing look effortless and this was a world-class, must-see act. 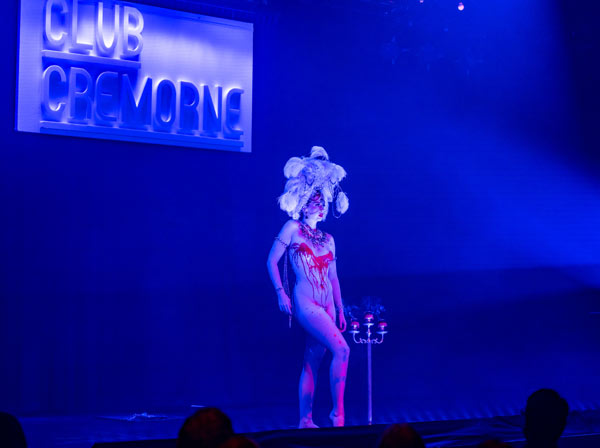 
Brissie-based legend, Mel Buttle, joined the line-up with her signature dry comedy. Telling jokes about her times as a high-school drama teacher and experiences with kids named Jayden, her localised routine was a highlight and connected well with audience members. Other gags centred on her family members, in particular her strewth father, Bruce Buttle, and her life living out in Ipswich. Buttle is a homegrown talent and a favourite among the crowd.

Reigning burlesque queen, Jacqueline Furey, also joined 'Club Cremorne' to set pulses racing. Known as the human heatwave, Furey upped the intensity with her double striptease segments, showcasing her wild femininity and stealing the spotlight. In one part, Furey acted as a shy 1960s lass, awkward and cute in what seemed like her first burlesque – a warm-up for the crowd. What was to come later on was Furey's very seductive sword-swallowing. This is a star who knows how to turn up the heat.

As the headliner act, Tom Thum gave a musical performance truly out of this world. The hip hop beatboxer and musician took audiences on an adventure through countries, completely warping his own vocal cords to achieve their traditional sounds. Thum ventured to his highest falsetto and lowest bass, showcasing just how elaborate his range is. The sounds emulated are so realistic, it’s almost like Thum had swallowed every musical instrument which ever existed.

'Club Cremorne' is a little bit crazy, a little bit naughty and exceptionally entertaining. Teasing the very talented creatives residing in Brisbane, this is a show that will leave you wanting – wanting live performance, wanting a night out and wanting more.