Phil's brand of performance allows him to connect with every member of the audience, as he combines the past and present and joins forces with the Perth Symphony Orchestra's eight-piece string section.

It's a fusion of Phil's traditionally inspired contemporary edge works, with the classical sounds of the orchestra. 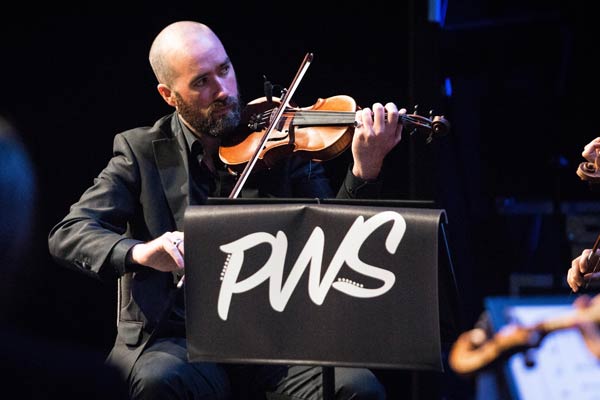 
What are you most looking forward to about being able to tour with Phil Walleystack?
Phil Walleystack is such a strong positive influence on the youth in the country towns and I'm very much looking forward to being part of that. His music proudly incorporates and draws from Indigenous culture and Perth Symphony Orchestra's involvement only serves to further support and amplify his efforts.

Obviously it's been quite some time since live performance was able to happen. What have you missed most?
Performing is where all my practice and work is finally served to the audience. It's where I have the most fulfillment and also it is my reference point for everything I do as a classical musician. But beyond this personal yardstick, most of all I've missed the excuse to tackle new repertoire with an ensemble of the calibre of PSO and share what I believe is a truly wonderful selection of music.

It's quite a fusion of sounds. Why do you think mixing Phil with the PSO will work so well?
String instruments' timbre have always spoken to me of Australiana. There can be a dustiness, and yet also an organic wetness to the sound, that matches our red earth, our washed out yellow greenery, and the feeling of reverence for what came before.

What's your favourite song by Phil, and why?
I'd have to say 'Sacred Ground' featuring Downsyde. Downsyde are one of Perth's most revered hip hop groups and have earned a place in the pantheon of Australian rap. I'm a big rap fan and seeing them work with Phil is just one more example of their versatility and support for indigenous art. Also the '80s synths in the second chorus are glorious. 
And what will you be bringing to the shows?
I spend a big part of my day working on my technical ability on the violin, and as such want to see Phil's vision realised to its utmost. I've considerable experience playing pop music, having worked with the Hilltop Hoods, London Grammar and many more, and believe I'm particularly well-suited to working in projects where bands and classical ensembles intersect. So what do I bring? An ability to translate of sorts, between two vastly different approaches to music-making.

You're a bit of a hip hop artist in your own right. What drew you to the orchestra?
Perth Symphony Orchestra is always pushing projects that develop their players and support their artistic growth. I could easily see that there was an orchestra open to working on new areas of western art music that encourage exploration and cross pollination. This being a particularly important tour with view to the current social and political climate in Australia.

What goes into putting a show like this together?
Mainly, a lot of hard work. Making sure that everyone is working together and in the same direction is paramount, and this project is no exception.

How do you hope the audiences respond throughout the tour?
I think they're going to love it.