Brisbane Cartoonists Caught In The Crowd Three Brisbane cartoonists turn to crowdfunding as a way of financing their new projects.

Ranging from Smith-Cameron's manga compilation (Iron Style) to Sugden's character-driven graphic novel (My Sister's Voice) and Stuart McMillen's non-fiction examination of drug addiction (Rat Park), there's something for virtually every type of reader between the three projects — and none of it involves dudes in capes.

"Comics have been getting further away from what people imagine," McMillen confirms, "which is people running around in underpants with capes on. Superheroes, and also Looney Tunes and Mickey Mouse-type characters. There have been some really important comics that have broadened the potential of what comics are in the minds of the public.

"A comic that really influenced me was Maus, by Art Spiegelman, which actually won the Pulitzer Prize and deals with the Holocaust. That was a great example of how comics can be used to tackle serious issues, in a way that couldn't quite be possible through a traditional book or film. He used the medium of comics, the panel-to-panel control that an artist has, in a way that created something completely unique that couldn't have been achieved through other types of media."

Of course, the staggeringly diverse potential of comics won't come as a shock to anyone who's been paying attention. Even so, McMillen is filling his own lane, focusing on real-world science and environmental issues that barely receive coverage in the mainstream media, let alone in other comics.

"I just like reading about ideas which aren't quite so well known," he says. "When I first started doing this back in 2008, I was thinking about how I could share these stories with other people. One of the ideas I had was starting a blog and writing text-based blog entries, but I realised I'd be one of many people doing the same sort of thing.

"So I thought about the comic format, because at least that way there's some graphics to draw people into the story and make them want to share it with their friends. Basically, I just picked up a pen in 2008 and learned how to draw from scratch, and I am where I am at the moment after keeping at it for five years without any sort of formal training."

The project he's seeking crowdfunding for, Rat Park, might be his most interesting yet. Following on thematically from his popular War On Drugs comic, it tells the story of a series of experiments done in the 1970s that shed a new light on how society thinks about drug addiction. "What happened before these experiments," he explains, "is there were some other studies done that supposedly 'proved' the addictive nature of drugs. They put a rat in a cage and gave it the ability to inject itself with drugs, and they found the rats would continue to self-inject themselves to the point of death. They continued to inject themselves rather than eat food or drink water. That was supposedly proof of the addictive nature of drugs, that these rats had no self control in the face of freely available drugs.

"But Bruce K. Alexander, who did the Rat Park studies in the 1970s, thought the way these original tests were done was unnatural. He thought that if he was locked in a box with no other option than to inject himself with drugs, then he probably would do that as well. So he repeated the experiment by locking rats in a cage and giving them freely available drugs, but he also had a second group of rats which he put in an enclosure called Rat Park. This was basically a social enclosure where the rats could play with each other, mate with each other, do whatever they wanted.

"The finding was that the rats in the cages continued to consume heaps of drugs, but those who were in the social Rat Park setting would mostly ignore the drugs in favour of building social relations with the other rats."

It's a fascinating story, with obvious implications for modern society. But it's also not the sort of thing publishers are handing out bags of money for, which is where crowdfunding — connecting artists directly with their fans, giving people a chance to fund work that actually interests them — comes in.

"Because what I'm doing is so unique and so weird, it's very hard for me to find a publisher or someone to fund the comic," McMillen says. "It's something that people like to read on my website, but it's not something that would find a home in a traditional media publication. The way I'm trying to do this is to appeal to the readers themselves, to get them to fund the work so they can read it."

McMillen is looking to fund his project from scratch — he's done enough research to know there's a viable comic there, but he hasn't started drawing it — which is why he's set himself a target of $6,000.

Alexis Sugden, on the other hand, has already finished My Sister's Voice, a somewhat grim tale about female relationships, emotions and identity, and is simply looking for funds to print and distribute her work.

"Basically, I was unemployed and I really needed something to do," she laughs, "so I decided I'd make a comic. Maybe three weeks into it, I got a job again, but I kept going in my spare time. I wanted to make a comic that told female stories. There are four characters, and they're all females. There's a mother-daughter relationship, a relationship between sisters, a relationship between a girl and a grandmother... I just wanted to explore things you don't see very often in comics, or in animation, which is the field I work in." Sugden isn't frustrated by the public lack of awareness of sophisticated comics, but does pity readers who can't look beyond superheroes.

"If that's all you know, you're really missing out. There are some amazing stories out there. Some of the stories that have impacted me the most have come from comic books. Persepolis by Marjane Satrapi and Blankets by Craig Thompson... they're so powerful, and they really moved me. Craig Thompson, in particular, influenced my artwork because he uses a lot of ink and thick brush strokes.

"There was also a web comic by Erica Moen called DAR: A Super Girly Top Secret Comic Diary… oh my god, it was so good! It was like someone wrote a comic just for me."

Of the three projects seeking funding, the one that might be of most interest to mainstream comics readers is Iron Style, Ashcan Comics co-founder Zac Smith-Cameron's compilation of Australian manga involving a variety of writers and artists.

"We have a few people doing manga-style stuff in Australia," Smith-Cameron says, "but there's no dedicated 'shonen' style comic. Shonen is a Japanese thing where there'll be a series of different stories in a single publication. They're published weekly in Japan, and they're pretty popular, but there's nothing like that here. We're trying to fill that gap for Australia.

"Iron Style is coming out through my comic label, Ashcan, and we don't really make much of a profit. Anything we do make, we put straight back into all the comics. With Iron Style, the print alone — because it's a thicker and more substantial comic, and we're trying to print it at a higher quality in a higher quantity — is going to cost us a fair bit. So we're just looking to pay for the printing and get it out there, and if we do make a profit, that's going to go straight back to the artists. That's the idea with the Pozible, as well." 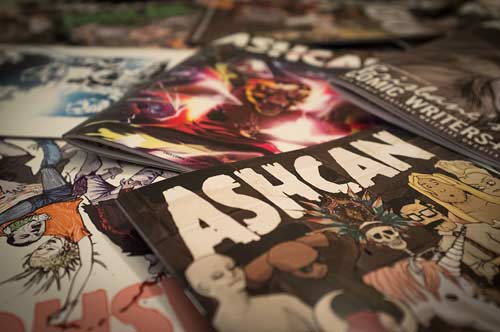 Like many young talents, Smith-Cameron was attracted to crowdfunding after seeing the success of its high profile participants: "Tim Schafer, who's developed a lot of famous video games over the years, used crowdfunding to raise $100,000 and ended up making much more than that. You see stuff like that, you hear a lot of the success stories, and you think if you give it a go it'll go like that as well. But sometimes it is a bit of a slog."

To make it less of a slog, Smith-Cameron has made a number of rewards available for fans who donate.

"On the low end, they're reasonably modest," he says, "but I think that's the point. If you pay $10, you'll get a copy of the first issue. If you pay around $50, you'll get a bunch of Ashcan comics as well. As you go further up, you're getting t-shirts, signed prints, personal messages from the contributors… one of the craziest ones includes a custom design shirt we'll make for you, a block mounted print, and fan art that we'll put into the next issue of Iron Style."

Though crowdfunding seems like an uncontroversial idea, there have been a few recent exceptions. Two weeks ago, a Kickstarter project was launched to fund an animated adaptation of Eric Powell's comic, The Goon. The project has a number of big names attached to it (including director David Fincher), and funds raised will go towards a story reel that will not be made available to the project's backers, leading some commenters to question whether the open-ended project goes against the spirit of crowdfunding — to help independent artists raise funds for projects they couldn't finance otherwise.

Elsewhere, Steve Albini poured scorn on Amanda Palmer — who had already raised a million dollars via Kickstarter to make an album — for attempting to crowdsource members of her live band and pay them in beer: "How can you possibly not have a bunch laying around after people just gave you a million dollars? I saw a breakdown about where the money went a while ago, and most everything in it was absurdly inefficient."

Here, though, we have three independent artists looking for thoroughly reasonable amounts of money to fund projects that will be directly enjoyed by their backers. If you want to be one of those backers, act fast (the Rat Park and My Sister's Voice campaigns close in early November, while Iron Style's campaign closes in January) and head to…