Thirty years ago, Australia’s leading Indigenous Dance Company Bangarra defied convention and launched themselves onto the stage at a time when the public was largely indifferent to Aboriginal and Torres Strait Islander culture.


Rather than play safe, Bangarra set about breaking the rules and restitching the creative canvas to suit themselves, and in doing so carved out a unique place in global dance theatre. The company is unquestionably, a giant of Australian culture.

'30 years of sixty five thousand' (QPAC, 23 August) is an anniversary celebration of everything Bangarra has achieved since its inception and is 105 minutes of unparalleled beauty, jaw-dropping creativity, sheer artistic brilliance, and exquisite movement. It also proves there is no limit to Bangarra’s astonishing ability to tell stories through a dance form that is forged from more than 65,000 years of culture.

This lengthy triple bill kicks off with ‘Unaipon’, Frances Rings’ ground-breaking 2014 tribute to David Unaipon, the Aboriginal inventor, philosopher, writer and storyteller whose face appears on the 50 dollar note. Rings, who recently returned to Bangarra to take up the role of Associate Artistic Director, has successfully remounted her work with the support of many from the original cast. Frances’ 2019 production reinvents this seminal work and digs deeper into the spiritual aspects of Unaipon’s life, while still remaining faithful to the original which owes much to the late David Page, whose influence and direction is evident throughout the piece.

A highlight of this compelling work is ‘String Games’ where five male dancers, including Helpmann Award-winner Beau Dean Riley Smith, entwine themselves with strings stretching across the stage. Based on a method of storytelling used by Ngarrindjeri Elders to pass on knowledge, this eye-popping routine is both visually dynamic and physically beautiful. 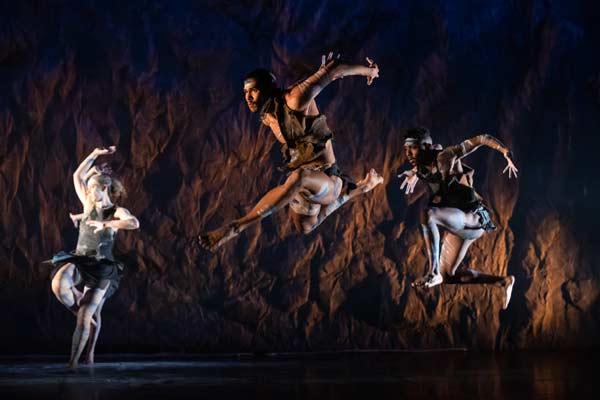 
The programme’s second piece, ‘Stamping Ground’, was created by Czech choreographer Jiří Kylián in 1983 following a week long corroboree on Groote Eylandt which was attended by thousands of men, women and children. Drawing inspiration from the Indigenous dance that he witnessed, Kylián set about to document the experience and the visual accompaniment to his precise choreography is a wonderful addition. 'Stamping Ground' is unique in many ways, not only in its physical complexity but the fact this is the first time Bangarra has performed a work by a non-Australian and non-Indigenous choreographer.

Roslyn Anderson, who was Kylián’s assistant at the time, has reimagined the original production and has delivered a mesmerising piece with outstanding performances by the six dancers featured: Rika Hamaguchi, Ella Havelka, Tara Gower, Baden Hitchcock, Tyrel Dulvarie and Ryan Pearson. Artistic Director Stephen Page had long considered staging ‘Stamping Ground’ (having first seen the work in the mid-1980s), however it has taken more than 30 years to see his dream realised. Given Kylián is considered one of the most influential choreographers alive today it is not surprising that Bangarra has taken this masterpiece and worked it into their repertoire.

The closing piece of the programme is ‘To Make Fire’, a diverse compilation of works from Bangarra’s extensive back catalogue. While avoiding a ‘best of’ package, Page has managed to successfully stitch together 40 minutes of the company’s finest moments in a manner which is truly inspiring. There are excerpts from ‘Mathinna’ (2008), ‘About’ (2011), ‘ID’ (2011), and ‘Rush’ (2002) featuring choreography by Page and Elma Kris. While the pieces are starkly different in style, each are meditative works about identity, country and resilience and each piece complements the other.

With this celebratory programme, Bangarra has successfully distilled 30 years of performance into a mesmerising showcase which embraces the new while acknowledging the past. It is a triumphant suite of works reminding us of Bangarra’s astonishing achievements and the defining role this First Nation dance company has played in Australia’s cultural development.